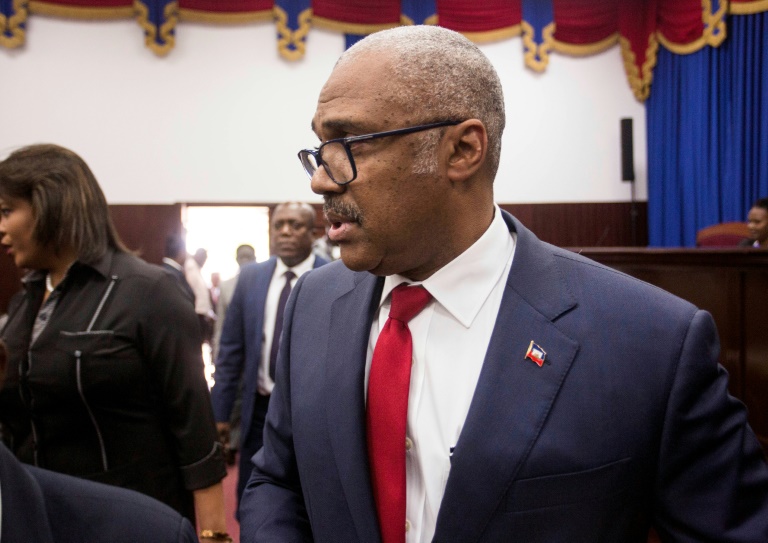 Lafontant had faced a potential vote of no confidence had he not resigned — something he had previously insisted he would not do.

Last week, the government in the impoverished Caribbean country announced plans for major fuel price hikes — 38 percent for gasoline, 47 percent for diesel and 51 percent for kerosene.

The announcement sparked mass protests, with streets in the capital Port-au-Prince and other cities blocked with barricades of debris and burning tires.

Dozens of shops were looted and burned and cars were set ablaze. At least four people were killed. The government quickly did an about-face and called off the planned price increases.

Lafontant, a physician who had little political experience before taking office in February 2017, had faced widespread criticism even before the spasm of violence.

Hours after Lafontant announced his resignation, President Jovenel Moise appeared on television to deliver a short speech, saying he wished to “gather all the forces of the nation, without losing any time, to form an inclusive government with the aim of alleviating the people’s misery and develop agriculture, energy and infrastructure.”

The head of state added that while he understood the many were suffering from unemployment and hunger, “violence is not compatible with either development or democracy.”

Moise will now have to appoint a new prime minister — a delicate political exercise in Haiti, where a new government’s general policy plan must be approved by both houses of parliament before it can officially begin working.

Several hundred protesters marched on Saturday in Port-au-Prince demanding the departure not just of Lafontant, but also of Moise.

“It’s not just a question of changing the prime minister, because day by day, the people are still suffering from more misery, unemployment, insecurity, hunger,” said Fleurette Pierre.

Haiti is desperately poor: around 60 percent of its people live on less than two dollars a day, and they are extremely sensitive to even minor increases in prices of just about anything.

In February, Haiti signed an agreement with the International Monetary Fund, the Washington-based global crisis lender, in which the country committed to carrying out economic and structural reforms to promote growth.

One of those conditions was the elimination of petroleum product subsidies, prompting the doomed price hike proposal.

The accord also called on the government to keep inflation under 10 percent.

Since 2015, inflation has been running at 13 to 14 percent annually. The budget blueprint submitted to the legislature in late June still foresaw a rate of 13.6 percent.

On Thursday, the IMF suggested “a more gradual approach” to ending fuel subsidies, paired with “compensatory and mitigating measures to protect the most vulnerable people.”

“We will continue to support Haiti… as they develop a revised reform strategy,” IMF spokesman Gerry Rice said, noting that ending subsidies would free up funds for other programs such as education.

Crafting a revised strategy — and divvying up Haiti’s meager budget resources — will be a delicate task.

The decision to scrap the price hikes means the government will have to find another way to come up with the $300 million the move would have generated.

It is not an insignificant amount — the total is more than 11 percent of the 2018-2019 budget presented to parliament in June for debate.

Now, Moise’s government has to find a way to appease all sides — angry and impatient consumers, politicians with varying interests and IMF economists.

Haiti’s deep levels of inequality are often cited by protesters who want both Lafontant and Moise out of office.

More than 200 years after gaining independence from France, Haiti is still ranked by the World Bank as having one of the planet’s most unjust societies.

Trump to end protection status for tens of thousands of Haitians