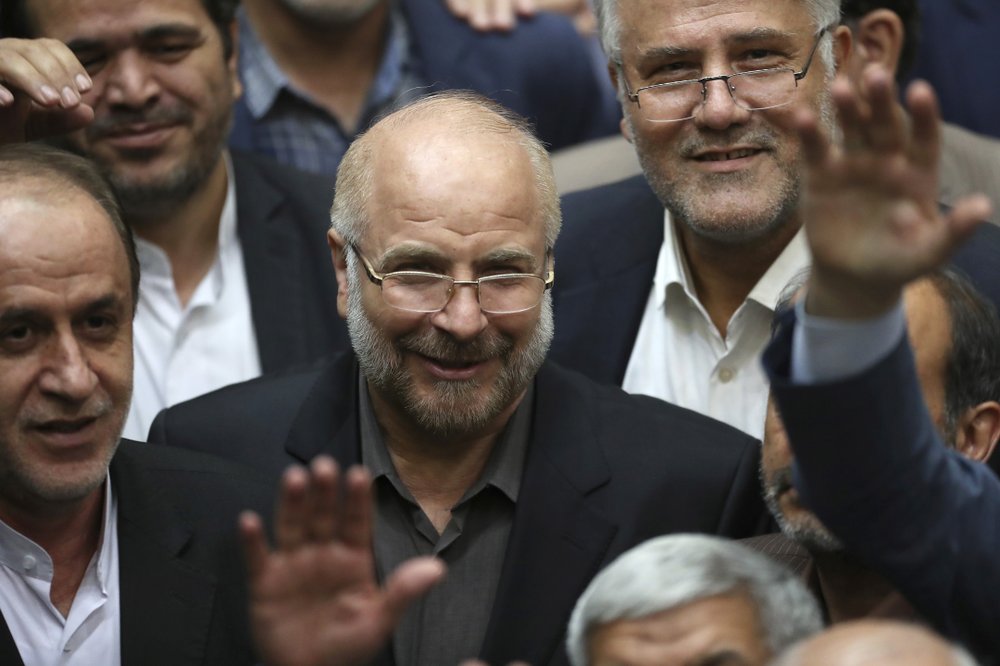 DUBAI, United Arab Emirates (AP) — Iran’s parliament elected a former mayor of Tehran tied to the Revolutionary Guard as its next speaker Thursday, solidifying hard-line control of the body as tensions between the US and the Islamic Republic remain high over its collapsed nuclear deal.

Mohammad Bagher Qalibaf’s assumption of power comes after a string of failed presidential bids and 12 years as the leader of Iran’s capital city, in which he built onto Tehran’s subway and supported the construction of modern high-rises.

Many, however, remember Qalibaf for his support as a Revolutionary Guard general for a violent crackdown on Iranian university students in 1999. He also reportedly ordered live gunfire be used against Iranian students in 2003 while serving as the country’s police chief.

“It is time to thank all representatives, all workers at the parliament complex, experts, managers, security forces and services,” Qalibaf said, promising to give a speech Sunday.

Qalibaf’s candidacy received 230 votes from the 264 lawmakers present in the parliament in the first round of voting, state television reported. Parliament has 290 seats.

Qalibaf, 58, replaces Ali Larijani, who served as the parliament’s speaker from 2008 until this May. Supreme Leader Ayatollah Ali Khamenei appointed Larijani as an adviser and a member of the country’s Expediency Council on Thursday, state TV reported.

As speaker, Qalibaf leads a body that can debate Iran’s annual budget and push for the impeachment of government ministers. However, laws passed by the parliament must be approved by a 12-member Guardian Council and Khamenei holds final say on all matters of state.

The position also puts Qalibaf onto Iran’s Supreme National Security Council, the country’s highest level body that handles defense and nuclear issues. That takes on new importance as the US withdrew waivers from Iran’s nuclear program late Wednesday and as tensions between the two nations remain high.

On Thursday, Guard navy chief Adm. Ali Reza Tangsiri issued a new warning to the US while inaugurating 112 new vessels in the port city of Bandar Abbas.

“Today, we announce that wherever the Americans are, we are right there beside them and they will feel it more in the near future,” Tangsiri said, according to the semiofficial Tasnim news agency.

A trained pilot, Qalibaf served in the paramilitary Guard during the country’s bloody 1980s war with Iraq. After the conflict, he served as the head of the Guard’s construction arm, Khatam al-Anbia, for several years leading efforts to rebuild.

Qalibaf then served as the head of the Guard’s air force, when in 1999 he co-signed a letter to reformist President Mohammad Khatami amid student protests in Tehran over the government closing a reformist newspaper and a subsequent security force crackdown. The letter warned Khatami the Guard would take action unilaterally unless he agreed to putting down the demonstrations.

Qalibaf then served as the head of Iran’s police, modernizing the force and implementing the country’s 110 emergency phone number. However, a leaked recording of a later meeting between Qalibaf and members of the Guard’s volunteer Basij force, included him claiming that he ordered gunfire be used against demonstrators in 2003, as well as praising the violence used in Iran’s 2009 Green Movement protests.

Iranian President Hassan Rouhani hinted at the the 2003 incident during a debate in the 2017 presidential election.

“There was an argument that you were saying that the students should come then we can pincer attack to them and finish the job,” Rouhani said at the time.

As mayor, Qalibaf faced corruption allegations, including over some $3.5 million being donated to a foundation run by his wife. However, he also used his prominence to travel to the World Economic Forum and even praised New York City in an interview with the Financial Times, undoubtedly raising eyebrows among hard-liners.

Qalibaf ran failed presidential campaigns in 2005, 2013 and 2017, the last of which saw him withdraw in support of the hard-liner Ebrahim Raisi, now the head of the country’s judiciary. Despite that, US diplomats suggested Qalibaf enjoyed the support of Khamenei’s influential son Mojtaba, according to diplomatic cables published by WikiLeaks.

Despite winning the vote, Qalibaf may still face suspicion from other lawmakers, particularly over his ambitions, wrote Jason Brodsky, the policy director of the Washington-based group United Against Nuclear Iran.

“Some factions view his bid with suspicion given rumors Qalibaf wants to use the speakership as a means to run for the presidency in 2021,” Brodsky wrote. “Also, because of his previous election campaigns facing off against Rouhani, Qalibaf would preside over a more combative parliament.”

Image: Mohammad Bagher Qalibaf, center, is surrounded by a group of lawmakers after being elected as speaker of the parliament, in Tehran, Iran, Thursday, May 28, 2020. Iran’s parliament voted Thursday to elect Qalibaf, a hard-line former mayor of Tehran as the legislative body’s new speaker. (AP Photo/Vahid Salemi)