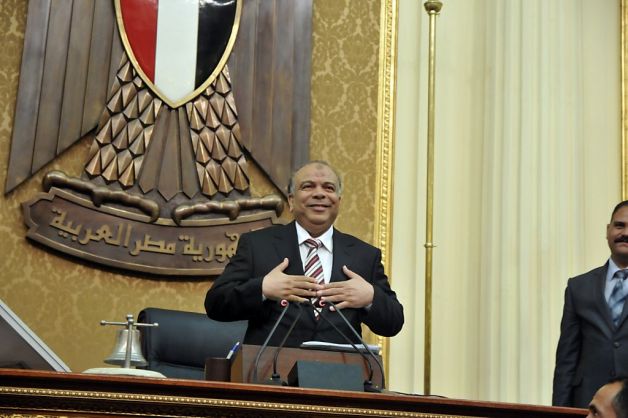 Amid loud applause and cheers, Saad al-Katatny’s victory in the presidential election for the Muslim Brotherhood’s Freedom and Justice Party  (FJP) was announced Friday. The 60-year-old former speaker of the now-dissolved Parliament defeated his opponent, Essam al-Erian — another FJP leader, who was long seen as a reformist — by garnering almost 67 percent of the vote.

In the lead-up to the vote, many of the group’s detractors contended that the result was a foregone conclusion. They held that Katatny’s compliant nature and ties to the hawkish leaders of the mother organization would qualify him to take over the FJP leadership and hence succeed President Mohamed Morsy, who had to relinquish his party post upon his ascent to the presidency.

While the result has thus come as no surprise, it has raised questions about the leverage and future of the so-called reform wing within an organization that stands as the primary political player in post-Hosni Mubarak Egypt.

“Reformists have no future … The reform trend is in agony,” says Haitham Abu Khalil, one of the former, more rebellious members of the Brotherhood.

Abu Khalil, a 44-year-old Alexandria-based agricultural engineer, contends that the nomination of Erian for the FJP leadership was “a bold move” by reformers to challenge the grip of conservatives who are already in full control of the Brotherhood and its political arm.

“However, they were swept away,” he tells Egypt Independent.

In last week’s poll, Erian garnered just under one-third of the 866 votes of the party’s general assembly.

The 58-year-old physician has long been  considered one of the more progressive voices within the Brotherhood. He belongs to the generation that resurrected the nation’s oldest Islamist organization.

Erian was one of thousands of Islamist university students recruited by the organization’s stalwarts when they were just released from prison in the mid-1970s. These new recruits were seen as the only hope left to rejuvenate the weakened organization.

Many of those in the newly recruited batch established themselves as promising politicians capable of engaging in competitive politics in syndicate and parliamentary elections.

Erian was one of these members, who remained for years a leader of the Doctors Syndicate. He joined Parliament in 1987. Meanwhile, he rose as a mediator between his group and other political parties.

He also established himself as a friendly figure to the Western media, always seeking to project a moderate image of the 84-year-old organization.

In the mid-2000s, reformists banked on the relative political opening induced by US pressure to voice criticism of the ruling regime and present their group as a potential democratic alternative to Mubarak’s government. In doing so, they became more vocal in expressing their full commitment to liberal and democratic values.

Abdel Moneim Abouel Fotouh, a former presidential candidate, spearheaded this trend at the time. He transcended the group’s conservatism by expressing in local and international media his support of a woman’s, as well as a non-Muslim’s, right to run for president.

However, these voices were soon muted when Mubarak launched his famous 2006 crackdown on the group. Nearly 40 of the group’s leaders were rounded up and referred to military tribunals.

The crackdown gave conservatives enough ammunition to silence all controversial propositions in order to maintain the group’s cohesion at that critical juncture.

In his book “The Muslim Brotherhood: Pre-revolution Years,” the late writer Hossam Tammam said the group’s more hawkish members launched a campaign to delegitimize all reform ideas. The group convinced the rank and file that reformist Brothers were expressing their personal views, and that none of their unconventional ideas were approved by the organization.

The group’s hardliners proved their might with the release of the infamous 2007 manifesto. In this platform, the group defied the essence of liberal democracy by adding clauses that entailed a council of clerics in charge of vetting bills to ensure their compatibility with Islamic law, and denied women and non-Muslims the right to run for president.

“The final draft of the 2007 platform proved that the final decision at critical junctures falls in the hands of the conservative bloc,” wrote Tammam, an expert on the group who died in 2011.

“This was the strongest and most public blow dealt to the reform trend within the group,” he added.

A year later, reformists incurred another major defeat as they lost more seats to conservatives in the 2008 Shura Council elections. However, their demise did not reach its peak until the December 2009 Guidance Bureau elections, which culminated in the exclusion of Abouel Fotouh.

In January 2010, hard-line leader Mohamed Badie rose to the post of supreme guide, hitting the last nail in the reformist coffin.

“The word ‘trend’ implies that the group had a segment that adopted more liberal views. But the group had only a few dispersed individuals who held moderate views but did not work on building a bloc of their own,” he said. “They did not exert any effort to spread their ideas within the group whereas [conservatives] were working hard to control the group.”

Reformist leaders “are to be held responsible for the current status of the group,” Barqy said.

“They kept improving the group’s image outward, but, meanwhile, they did not do anything to fix the group from inside,” he added.

Shortly after the revolution broke out, several reformists defected and launched their own ventures.

Many young Brothers refused to join the group’s official party, and established their own, called the Egyptian Current Party. Meanwhile, older leaders split to form the Nahda Party.

But the major act of defiance came from Abouel Fotouh, who decided to run for president independently from the group. Shortly after, he was dismissed from the group.

However, none of the new ventures has caused a major exodus from the group or managed to gain a major following.

Meanwhile, a few reformist figures including Erian, Mohamed al-Beltagy, Helmy al-Gazzar and Gamal Heshmat chose to stay. While Beltagy has gone public in criticizing the Brothers’ policies on several occasions, the others have often adopted a more conciliatory approach.

Erian, for example, has gone the extra mile to prove his loyalty to the organization by clashing with its detractors. Recently, he has even shaken his old reputation for tolerating other political groups by voicing ruthless criticism of leftist forces on his Twitter account, accusing them of receiving foreign funding, being hostile to religion and despising the masses.

“Reformists who remained in the group sought to make compromises. Despite all concessions they made in order to hold the stick in the middle, they could not meet half way with [conservatives],” said Barqy, a leader of the would-be Egyptian Current Party.

Most of these moderates have failed to gain the trust of the Brotherhood’s leadership. None of them have been appointed to any influential position, whether in the party or in the new government. Most empowered figures, including Katatny, are believed to be close to the group’s most influential and conservative leader, Khairat al-Shater.

“The only option left to reformers is to break ranks with the group and take with them the largest number of young members possible,” says Osama Dorra, a 28-year-old former Brother whose membership was frozen after he criticized the Brotherhood’s political platform in local media in 2010. “Otherwise, they will remain with no influence.”

Dorra contends that Morsy’s ascent to the presidency complicates the situation of reformist brothers and helps hard-liners tighten their control over lay Brothers.

Hard-liners would say this victory was achieved thanks to the course they chose and asked members to follow, explains Dorra, who spent almost 10 years in the Brotherhood.

“Hence, there is no room for small groups to speak freely or to have any influence on the organization,” he says.