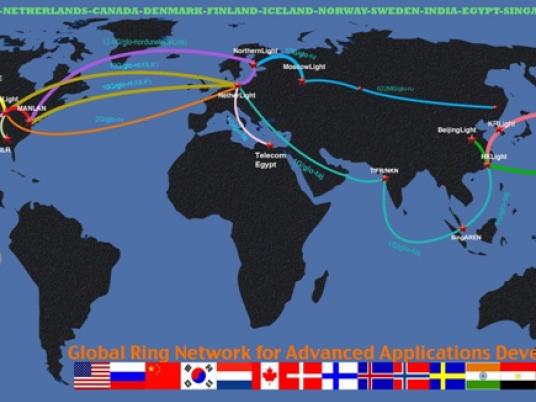 Egypt’s research is currently experiencing a technological breakthrough with the recent introduction of a high-speed internet network that offers research institutes and universities access to a data transfer speed of up to 10 gigabits per second, to exchange data and promote collaboration between researchers all over the world.

The Global Ring Network for Advanced Applications Development, linked research institutes and universities in the US and Russia when it was first created in 1998, before expanding to India, Europe and Egypt, the first African link.

Ola Wageih Laurence is the director of the Egyptian National Scientific and Technical Information Network who has spearheaded the introduction of GLORIAD in Egypt.

“The US National Science Foundation gave Egypt a grant to be linked to GLORIAD in 2010, and the Telecommunications Ministry was the body charged with implementing and financing GLORIAD in Egypt,” Laurence explains to Egypt Independent.

“But the upheaval of 2011 disrupted the project, and the ministry no longer wished to fund GLORIAD,” she explains. “So the ministry of scientific research took over and funded the project, which cost LE3 million the first year and to LE6 million for the second.”

The money, paid to Telecom Egypt, was used to finance the high-speed submarine fiber optic line that links Egypt to Amsterdam, while the Amsterdam-US portion of the underwater cable was paid by the National Science Foundation. The new link is designed to intelligently direct internet traffic between the ordinary internet and GLORIAD.

GLORIAD was distributed to some research centers and institutes — the National Research Centre, the Agricultural Research Center and the National Authority for Remote Sensing — in 2010 as a trial version, and is now continuing its expansion to other institutes. A major training course on GLORIAD will be given to the various users in September according to Laurence.

Ayman Dessouky, a professor emeritus at the Egyptian Electronic Institute who has retired from the National Authority for Remote Sensing, explains how much this tool can be beneficial to young researchers in Egypt: “The research conducted at [the authority] requires the use of environment modeling applications coming from the entire world, and relies heavily on data and files exchanged between [the authority] and the United States,” he says, adding that the Egyptian scientific research is not the most advanced and needs to rely on state-of-the-art technology from the US.

Dessouky says that having such access to global research would immerse young researchers into a dynamic environment and spur collaboration with institutes in India, Europe or the US, while giving their work exposure.

“Scientific work cannot be done in isolation,” Dessouky insists. “In order to model an environmental application, you need data from the entire region and the world, and thus need active collaboration.”

By being the first country to have access to GLORIAD on the continent, Egypt has become an entry point for the rest of Africa, and a node from which the link will expand.

Laurence says GLORIAD will expand in the region via two rings: one ring will cover North Africa, including Libya, and the second will expand southeast to Ethiopia, Sudan and South Sudan.