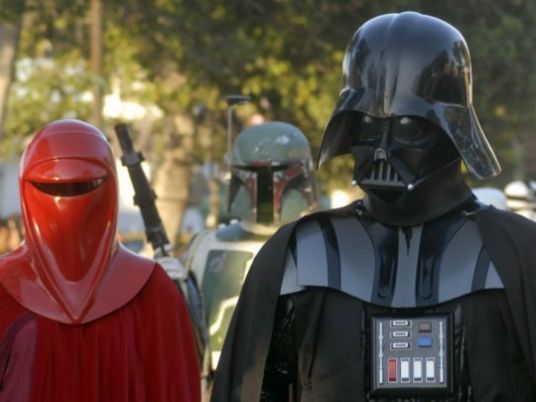 Hollywood is preparing for what could be the largest movie premiere in its history on Monday night when the hugely anticipated "Star Wars: The Force Awakens" is screened for VIP audiences in three separate theaters amid tight security.
At one of the Hollywood Boulevard location – the iconic TCL Chinese Theater, where the first "Star Wars" premiered in 1977 – fans are already camped out this weekend, eagerly awaiting their turn when the film opens for regular folks next Friday.
One fan, Lavonne Dominguez, wasn't interested in simply buying a ticket online to see the movie in her local movie theater. She and several friends who drove up from Orange County wanted an out-of-this-world experience.
"I need to see it in an epic place with people who are just as excited about 'Star Wars' as me," said Dominguez, 32, who was among about 150 devotees in line at the Chinese on Friday, occasionally ducking under awnings to avoid a passing shower.
Several fans began holding court outside the theater last weekend. Many of them previously lined up at the same location to be among the first to see the "Star Wars" prequel films, beginning in 1999. This time, the theater operator is allowing them to camp out on top of the theater's famous celebrity hand- and footprints, instead of along the sidewalk out front.
The fans must log at least 24 hours in line to gain entry to the theater's first public showing of the film, but those who spend more time in line will earn preferential seat selection.
"If I didn't have to go to work, I probably would be here the whole time," said Dominguez.
It's unclear just where the group will be when Lucasfilm's latest "Star Wars" installment has its worldwide premiere on Monday night.
The star-studded event is expected to be one of the largest – and most secretive – Hollywood premieres ever.
On Friday, dozens of workers were busily erecting a mammoth opaque tent lining four blocks of Hollywood Boulevard.
Inside the partially built structure, curious tourists snapped photos of lighting equipment while security personnel drove around in carts with "The Force Awakens" logo on them.
Lucasfilm-owner Disney declined to comment or provide details about the premiere, but it's expected to take over the TCL Chinese Theater, as well as the nearby El Capitan Theater and the adjacent Dolby Theater, home of the Oscars.
An invitation sent to members of the media Friday afternoon requested that they withhold from spoiling the film after seeing it for the first time Monday night and dress in "'Star Wars'" chic" attire to the event.
Los Angeles Police Lt. John Jenal said the department is treating the premiere like other marquee events that take place on Hollywood Boulevard, including the Academy Awards. He noted "The Force Awakens" debut is "triple the magnitude of a typical premiere."
Jenal said extra vehicle patrols and more officers on foot are being assigned to the area, with several streets blocked to traffic. A half-mile stretch of Hollywood Boulevard between Highland and La Brea avenues was closed off beginning Friday.
Beyond the Hollywood premiere, there are several special screening events planned across North America to celebrate the opening of "The Force Awakens."
In New Orleans, a "Star Wars"-inspired Mardi Gras marching club is organizing a Wednesday night pajama party-marathon screening of the first three "Star Wars" films.
"It will be a big group of folks in pajamas eating popcorn and watching the original trilogy," said Ryan Ballard, an artist and co-founder of the Intergalactic Krewe of Chewbacchus.
The 1,000-member group also plans a uniquely New Orleans celebration on Thursday night. Ballard said the Krewe arranged for a private showing for 100 of its officers at a local theater. Afterward, the group will lead a parade of costumed revelers into the French Quarter, accompanied by a brass band playing a medley of "Star Wars" music.
In Kane, Pennsylvania, the Kane Family Drive-in Theater is reopening in the dead of a Northeast winter to show "The Force Awakens." It marks the first time in the drive-in theater's 63-year-old history that it will be open during the snowy season.
The Alamo Drafthouse in Austin, Texas, is hosting an endurance contest for seven die-hard fans who are hoping The Force will keep them awake. The theater will screen the entire "Star Wars" saga ahead of the debut of "The Force Awakens." For those that survive the 16-hour marathon without nodding off, "The Force Awakens" will then play repeatedly until one fan remains awake. The winner will receive a seven-year movie pass and "Star Wars" swag.
While hundreds of opening-weekend showings have sold out, box-office analysts say there will still be plenty of available theaters to see "The Force Awakens" beginning Friday without needing to wait in line.