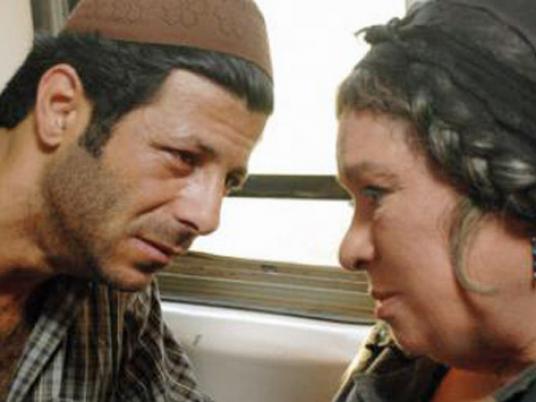 Ezz wanders around train carriages selling sleazy love stories; he couldn’t get a job after graduating from university. Ezzat and Salah are two friends who just got back from Libya, where they struggled for two years to earn a living. Sabry and Farid, two other friends living in Egypt, make their living by stealing rods off the railway tracks and selling them. And they rely on Massoud, the watchman, to warn the train driver later. They have no intention to get people killed.

These are but a few of the characters screenwriter Ahmed Abdullah weaves around the famous al-Ayat train accident in his film “An Hour and a Half.” Around 1500 passengers lost their lives on that train in February 2002; and although dozens of these unfortunate accidents have been taking place since the 1990s, “An Hour and a Half” is the first film to focus on them, mixing reality with fiction to draw a bigger picture of current life in Egypt.

“An Hour and a Half” tells 12 different stories about many desperate characters striving to make ends meet. It takes viewers to their homes, acquaints them with their backgrounds, their jobs, their motivations to ride al-Ayat train, and occasionally their hopes. Meneim and Malak, a budding singer and a lyricist, for instance, wait at the station hoping a concert coordinator would hear them perform and give them a chance to play for an audience. Still, everything appears in pale colors and cool lighting, conveying the austerity of the characters’ lives, be it inside the train, at the station or at the nearby houses.

The hidden connections that Abdullah along with director Wael Ehsan draw between all the characters weave the stories together very tightly, as we see how everyone’s behavior influences the others indirectly, and the problems that the filmmakers are trying to highlight through the peeps they make into the characters’ lives. Several characters suffer from unemployment, leading them to resort to petty work opportunities or travel for work like Ezzat and Salah. But even those who travel return disappointed, ashamed to tell their poor families who await them at the station with high hopes that their money had been stolen in Libya.

Through the watchman’s story, we see civil servants who earn so little a salary that they cannot cover their simplest daily needs. He spent his life watching the railway tracks for only EGP 400 (les than US$70) a month. He could neither support his daughter in marriage nor provide medication for his sick wife. The filmmaker shows him in a scene complaining about the state’s disregard for the poor, and how they need “to work day and night to survive.” The absent-minded watchman gets out of his small mud-brick house near the railway tracks to check the rods. Instead, he starts blaming himself for his daughter's spinsterhood in a very impressive monologue. He passes by the missing rods but doesn't see them.

The movie ends with Massoud, the watchman, fighting with Sabry after he sees him in a relationship with his wife. Sabry kills the old watchman before he could replace the stolen rods or warn the train driver. The driver doesn't pay attention to the missing rods, and the train crashes. Karima Mokhtar, an old woman who’s been abandoned at the station by her son with a little note asking whoever finds her to deliver her to a nursing home, prays God to save them in one of the strongest and most sincere scenes in the film, bringing viewers at the movie theater to tears.

The film closes with news of the terrible accident making it to the local press, but like many disasters Egyptians have underwent over the past few decades, they’ve gone forgotten and unaccounted for; the papers with the headlines used to wrap foul and falafel on street food stalls.

Tags An Hour and a Half Sa'a we Nos train accidents