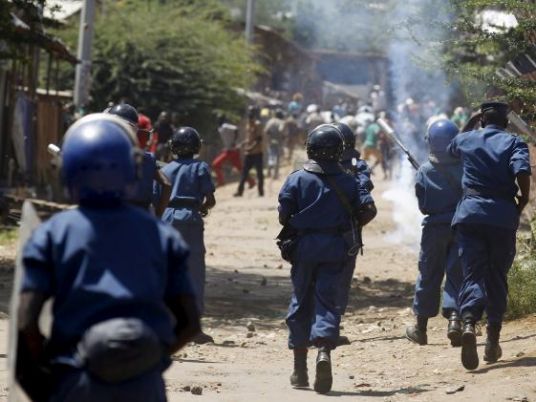 Police fired tear gas and shot in the air to disperse hundreds of people protesting in the outskirts of Burundi's capital on Tuesday against President Pierre Nkurunziza's decision to run for a third term.
Crowds gathered from early in the morning waving placards and chanting slogans accusing the president of breaking the constitution. Some blocked one road with burning tires on the third day of sometimes violent demonstrations in Bujumbura.
One protester told Reuters two people suffered gunshot wounds in the northern Cibitoke suburb, though there was no immediate confirmation, or comment on the wider protests, from the police, army or government.
Nkurunziza's announcement on Saturday that he would run in June 26 elections has triggered the worst political crisis in the east African country since it emerged from civil war a decade ago.
Activists say Nkurunziza and his ruling CNDD-FDD party are breaking two-term limits set out in constitution and the Arusha peace agreement that ended the civil war and has been credited with containing Burundi's ethnic rifts.
The president's supporters say his first term does not count as he was picked by lawmakers, not elected. Nkurunziza's spokesman has called the protests an "insurrection".
"I am calling upon President Nkurunziza to abandon seeking for another third term to prevent the country from massive violence and killings," opposition leader Agathon Rwasa told a news conference on Tuesday.
Crowds on the streets waved placards marked with the message: "No to third term".
The presidency was unavailable for comment.
Burundi's civil war pitted the army, then dominated by the ethnic Tutsi minority, against rebel groups mostly made up of majority Hutus, one of them led by Nkurunziza. The army now includes both ethnic groups.
The prospect of a fresh build-up of ethnic strife will sound alarm bells across a region still scarred by the 1994 genocide in Burundi's neighbor Rwanda, where more than 800,000 people were killed, most of them Tutsis and moderate Hutus.
Authorities say about 21,000 people have fled from Burundi to Rwanda, and about 4,000 more over the border to the Democratic Republic of Congo.
The government shut down or imposed restrictions on several radio stations on Monday and many people reported being unable to use the popular WhatsApp messaging service on Tuesday.