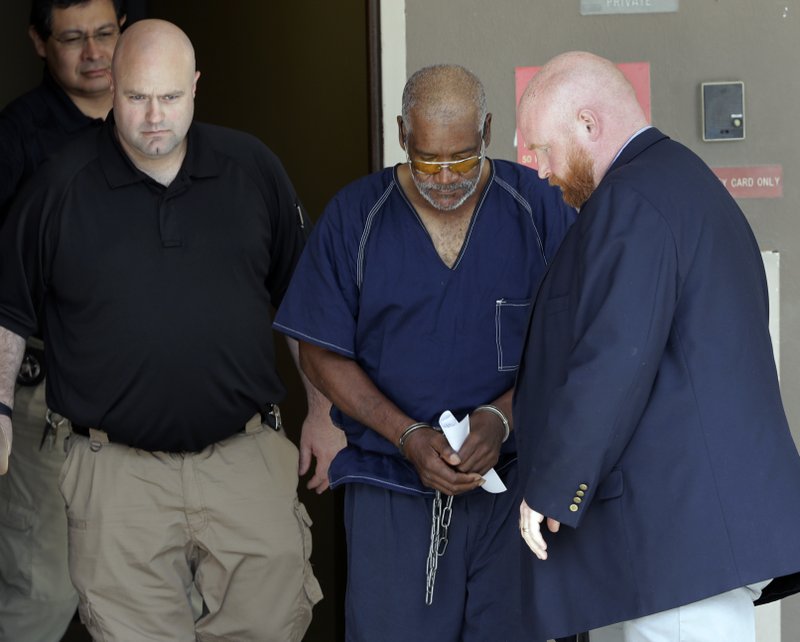 The tractor-trailer was pitch-black inside, crammed with maybe 90 immigrants or more, and already hot when it left the Texas border town of Laredo for the 150-mile trip north to San Antonio.

It wasn’t long before the passengers, sweating profusely in the rising oven-like heat, started crying and pleading for water. Children whimpered. People took turns breathing through a single hole in the wall. They pounded on the sides of the truck and yelled to try to get the driver’s attention. Then they began passing out.

A man who survived a journey across the Mexican border in the back of a tractor-trailer, where 10 were found dead in Texas, says there was no water or fresh air. He described the trailer being “full.” (July 24)

By the time police showed up at a Walmart in San Antonio around 12:30 a.m. Sunday and looked in the back of the truck, eight passengers were dead and two more would soon die in an immigrant-smuggling attempt gone tragically awry.

The details of the journey were recounted Monday by a survivor who spoke to The Associated Press and in a federal criminal complaint against the driver, James Matthew Bradley, who could face the death penalty over the 10 lives lost.

“After an hour I heard … people crying and asking for water. I, too, was sweating and people were despairing. That’s when I lost consciousness,” Adan Lara Vega, 27, told the AP from his hospital bed. By the time he came to, he was in the hospital, where his ID bracelet identified him by the last name Lalravega. Mexican consulate and US officials later told AP the correct spelling was Lara Vega.

Bradley, 60, of Clearwater, Florida, appeared in federal court on charges of illegally transporting immigrants for financial gain, resulting in death. He was ordered held for another hearing on Thursday.

He did not enter a plea or say anything about what happened. But in court papers, he told authorities he didn’t realize anyone was inside his 18-wheeler until he parked and got out to relieve himself.

In addition to the dead, nearly 20 others rescued from the rig were hospitalized in dire condition, many suffering from extreme dehydration and heatstroke.

Mexico’s foreign ministry released a statement Monday night that said “according to preliminary information,” 25 of the migrants inside the rig were Mexican.

Four of those who died and 21 of those hospitalized are Mexican, the statement said. Some of the others inside the truck were from Guatemala.

Many of the immigrants had hired smugglers who brought them across the US border, hid them in safe houses and then put them aboard the tractor-trailer for the ride northward, according to accounts given to investigators.

“Even though they have the driver in custody, I can guarantee you there’s going to be many more people we’re looking for to prosecute,” said Thomas Homan, acting director of US Immigration and Customs Enforcement.

Bradley told investigators that the trailer had been sold and he was transporting it for his boss from Iowa to Brownsville, Texas. After hearing banging and shaking, he opened the door and was “surprised when he was run over by ‘Spanish’ people and knocked to the ground,” according to the criminal complaint.

He said he did not call 911, even though he knew at least one passenger was dead.

Bradley told authorities that he knew the trailer refrigeration system didn’t work and that the four ventilation holes were probably clogged.

The truck was registered to Pyle Transportation Inc. of Schaller, Iowa. President Brian Pyle said that he had sold the truck to someone in Mexico and that Bradley was supposed to deliver it to a pick-up point in Brownsville.

“I’m absolutely sorry it happened. I really am. It’s shocking. I’m sorry my name was on it,” Pyle said, referring to the truck. He said he had no idea why Bradley took the roundabout route he described to investigators.

Bradley told authorities that he had stopped in Laredo, which would have been out of his way if he were traveling directly to Brownsville, to get the truck washed and detailed before heading back 150 miles (240 kilometers) north to San Antonio. From there, he would have had to drive 275 miles south again to get to Brownsville.

“I just can’t believe it. I’m stunned, shocked. He is too good a person to do anything like this,” said Bradley’s fiancee, Darnisha Rose of Louisville, Kentucky. “He helps people, he doesn’t hurt people.”

One passenger described a perilous journey that began in Mexico, telling investigators he and others crossed into the U.S. by raft, paying smugglers 12,500 Mexican pesos (about $700), an amount that also bought protection offered by the Zeta drug cartel.

They then walked until the next day and rode in a pickup truck to Laredo, where they were put aboard the tractor-trailer to be taken to San Antonio, according to the complaint. The passenger said he was supposed to pay the smugglers $5,500 once he got there.

Another passenger told authorities that he was in a group of 24 people who had been in a “stash house” in Laredo for 11 days before being taken to the tractor-trailer.

Lara Vega told the AP that he was told by smugglers who hid him and six friends in a safe house in Laredo that they would be riding in an air-conditioned space.

The Mexican laborer from the state of Aguascalientes said that when they boarded the truck on a Laredo street Saturday night for the two-hour trip to San Antonio, it was already full of people but so dark he couldn’t tell how many.

He said he was never offered water and never saw the driver. Lara Vega said that when people are being smuggled, they are told not to look at the faces of their handlers, and it’s a good idea to obey.

Bradley told authorities that when he arrived in San Antonio, nobody met the tractor-trailer. But one passenger said six black SUVs were waiting to pick up the immigrants and were full in a matter of minutes. And San Antonio police said store surveillance video showed vehicles picking up some of the immigrants.

Lara Vega said he was deported from the US three years ago but decided to take another chance because the economy is depressed where he lives with his wife, 4-year-old daughter and 3-year-old son.

“A person makes decisions without thinking through the consequences,” he said, “but, well, thanks to God, here we are.”

Supreme Court to set guidelines for Trump treatment of non-citizens