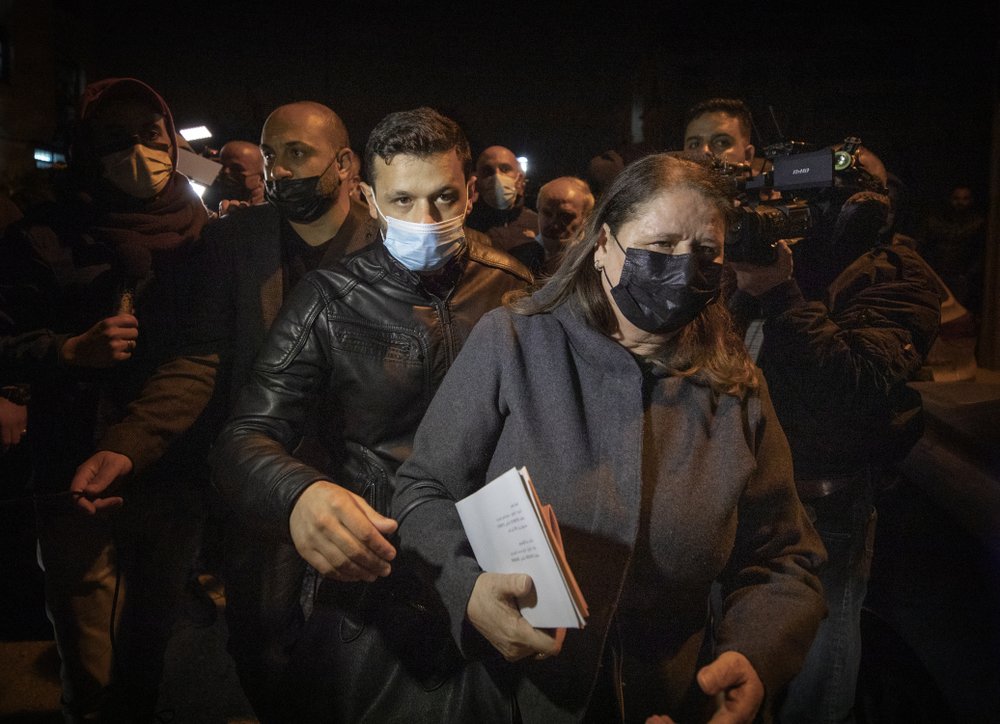 RAMALLAH, West Bank (AP) — A popular Palestinian leader imprisoned by Israel has registered his own parliamentary list in May elections, his supporters said Wednesday, in a last-minute shakeup that could severely weaken President Mahmoud Abbas’ Fatah party and help its militant Hamas rivals.

Marwan Barghouti’s wife, Fadwa, registered the list hours before the deadline set by the election commission. Polls indicate it would split the vote for Fatah, potentially paving the way for another major victory by Hamas. That increases the likelihood that Abbas will find a way to call off the first Palestinian elections in 15 years.

Barghouti, 61, a former Fatah militant commander, is serving five life sentences in Israel following a 2004 terrorism conviction. But he remains a popular and charismatic leader, and by breaking with Abbas he could reshape Palestinian politics and potentially replace him as president.

His entry reflects growing frustration with Abbas, who has presided over an increasingly authoritarian and unpopular Palestinian Authority that has failed to achieve national unity or advance Palestinian hopes for an independent state.

It’s unclear how Barghouti’s rise would affect relations with Israel. Both he and Abbas want a Palestinian state in the occupied West Bank, Gaza and east Jerusalem, but there have been no substantive peace talks in over a decade. Israel is unlikely to release Barghouti regardless of his political fortunes, and may refuse to engage with a leader it views as a terrorist.

Abbas has decreed parliamentary and presidential elections for May and July this year, the first since 2006, when the Islamic militant Hamas won a landslide victory in parliamentary elections. That precipitated a crisis that led to Hamas’ seizure of Gaza from Abbas’s forces the following year, leaving the West Bank and Gaza divided between rival governments.

Abbas decreed the election in January in a step meant to help heal the division. It now remains to be seen whether the elections will actually be held, given the long-running feud between Fatah and Hamas — and the widening divisions within Fatah.

An opinion poll carried out by the Palestinian Center for Policy and Survey Research earlier this month found that a separate list endorsed by Barghouti would split the Fatah vote and potentially garner more support than the official list.

“Barghouti running would dramatically change the outcome,” the center’s director Khalil Shikaki said last week when the results of the poll were published.

If Barghouti runs for president in elections planned for this summer, he would easily defeat both Abbas and Hamas leader Ismail Haniyeh, according to the poll, which surveyed 1,200 Palestinians with a margin of error of 3 percentage points.

Barghouti, 61 has flirted with a run in the past but eventually ended up endorsing Abbas, who was elected to a four-year term in 2005 but has remained in power since then.

This time Barghouti will partner with Nasser al-Kidwa, the 67-year-old nephew of the late Palestinian leader Yasser Arafat for a list called “Freedom.” Al-Kidwa was kicked out of Fatah in early March after announcing he would run on his own list.

“We hope that this list will lead to democracy,” Fadwa Barghouti said. “We registered this list and we hope it will succeed.”

“We seek to win the elections in the spirit of democracy, and we will respect the results,” he added.

Another list, known as “Future,” has been registered by supporters of Mohammed Dahlan, a former senior Fatah official who had a falling-out with Abbas and is now based in the United Arab Emirates. He is also expected to drain support from Fatah.

The fracturing of Fatah severely weakens Abbas and could pave the way for the far more disciplined and unified Hamas — which is running on one list — to emerge as the largest Palestinian party. Abbas could postpone or cancel the elections, but that would risk censure from the United States and European nations, which provide vital aid to the Palestinian Authority and have long called for free and fair elections.

East Jerusalem could provide a pretext for cancelling or postponing the elections. Israel bars the PA from operating there and has not said whether it will allow voting in the city.

Tensions are already rising in the occupied West Bank. In the Qalandia refugee camp near Jerusalem, dozens of Fatah gunmen fired automatic weapons into the air Wednesday night to protest the expected makeup of the official party list, which they said did not represent them.

Barghouti led Fatah’s militant wing during the intifada, or uprising, that erupted in 2000 amid the breakdown of the peace process. He condemned attacks targeting civilians inside Israel, though Israel says he is responsible for civilian deaths.

The uprising saw Palestinians carry out suicide bombings and other attacks against Israeli civilians as the Israeli military launched deadly raids in the West Bank and Gaza. More than 6,000 Palestinians and over 1,000 Israelis were killed, with the unrest tapering off after 2005.

Israeli troops arrested Barghouti in 2002, at the height of the uprising, and two years later a military court convicted him of orchestrating attacks that killed five people, giving him an equivalent number of life sentences. Barghouti refused to recognize the Israeli military court or offer any defense.

Many Palestinians view Barghouti as a revolutionary leader in the mold of Nelson Mandela or Fidel Castro, unsullied by the corruption of the West Bank-based Palestinian Authority or the long-running feud between Fatah and Hamas. As a long-jailed militant, he is seen as having sacrificed his freedom for the cause of Palestinian independence.

From behind bars, he has continued to call for a Palestinian state in the West Bank, Gaza and east Jerusalem, lands Israel seized in the 1967 war. Polls consistently show him to be the most popular Palestinian leader, with support from across the political spectrum.

In 2017, Barghouti led more than 1,500 prisoners in a 40-day hunger strike to demand better conditions inside Israeli jails. Most Palestinians view prisoners held by Israel as heroes to their cause, and the strike bolstered Barghouti’s image.

Israel considers Barghouti and other Palestinians jailed for security offenses to be terrorists and has given no indication it would free him. He was not included in a group of more than 1,000 high-profile prisoners who were released in 2011 in a deal with Hamas in exchange for an Israeli soldier captured by militants and held in Gaza for more than five years.