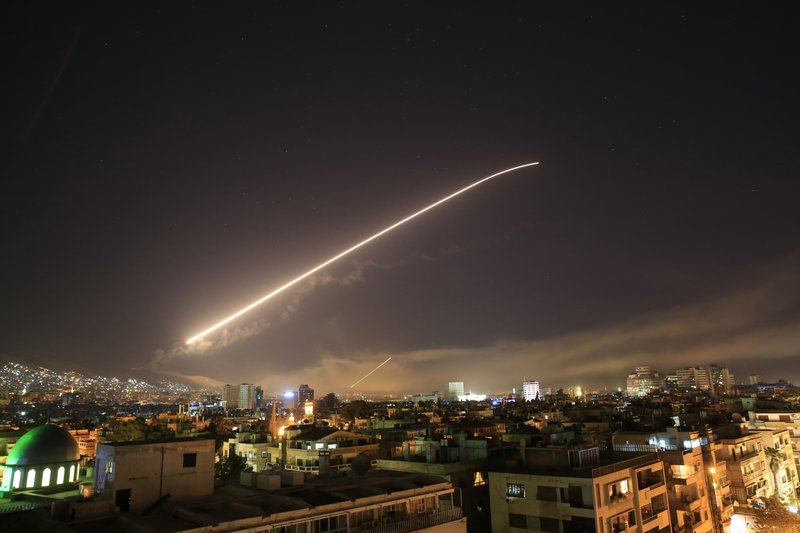 AMMAN, Jordan (AP) — As the Middle East ushers in 2019, the decade’s ruinous conflicts in Syria, Yemen, Libya and Iraq seem to be winding down after exacting a painful price — many thousands killed, millions uprooted from their homes and entire cities reduced to rubble.

Yet the potential for unrest remains high, including in countries that escaped civil war after the 2011 Arab Spring uprisings, such as Jordan, Lebanon and Egypt. Millions of young people in the region remain locked out of economic and political participation as authoritarian governments fail to tackle soaring youth unemployment and other deep-seated problems. 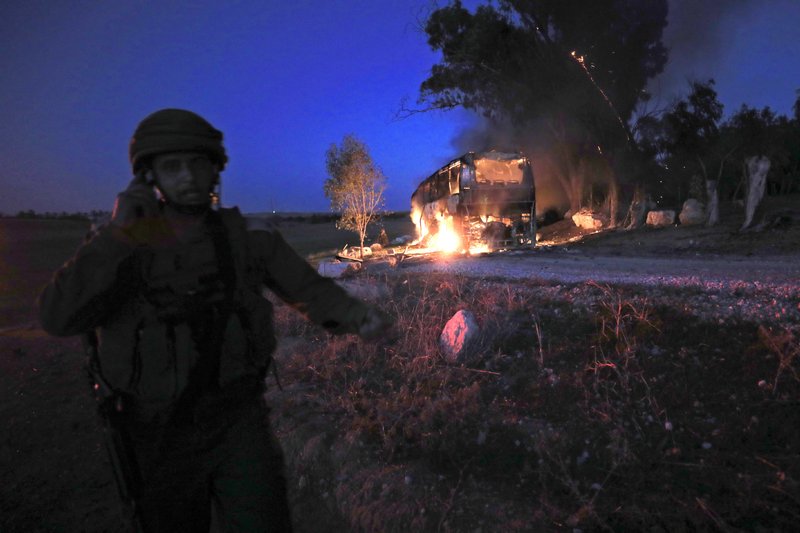 An Israeli bus in flames after being hit by a mortar shell fired from Gaza near the Israel- Gaza border in November. (AP Photo/Tsafrir Abayov)

“I think 2019 is a very challenging year,” said analyst Amer Sabaileh in Jordan, where weekly rallies against economic policies toppled a prime minister this year and now take aim at his successor.

Meanwhile, President Donald Trump’s policy of siding with one Middle East powerhouse, Saudi Arabia, against its main rival, Iran, has further heightened regional tensions. For now, Tehran seems determined to wait out Trump’s presidency, sticking to its 2015 nuclear deal with world powers despite the US withdrawal and restoration of heavy sanctions.

In a region where violent conflict has killed hundreds of thousands of people, the brutal slaying of one Saudi writer, Washington Post columnist Jamal Khashoggi, by Saudi agents has been one of the most significant events of 2018. The killing, for which Saudi Crown Prince Mohammed bin Salman was widely held responsible — including by the Republican-led US Senate — forced a reckoning of Saudi Arabia’s involvement in Yemen’s civil war and a review of the US-Saudi relationship. 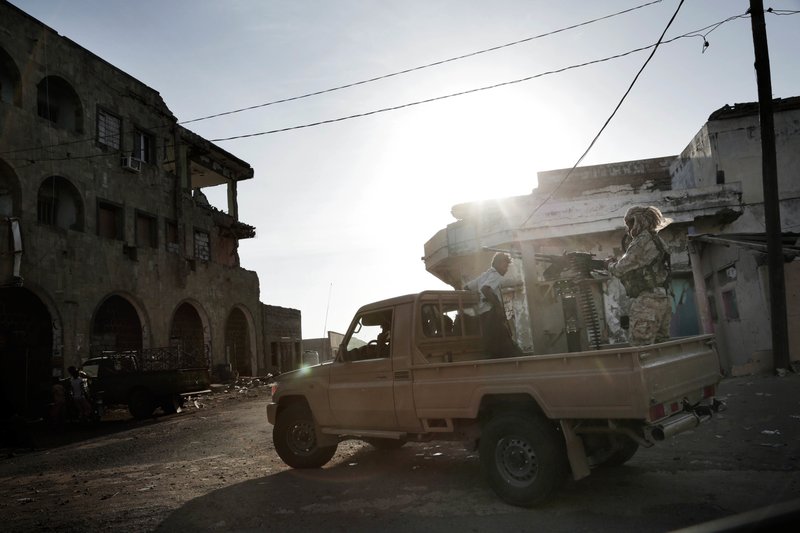 Yemen’s government, backed by a Saudi-led coalition, made some progress with the Iran-linked Houthi rebels toward a UN-sponsored peace deal last week, a first after four years of fighting killed at least 60,000 people and pushed the country to the brink of famine. A new round of talks is set for January, with expectations that US pressure on Gulf Arab allies could lead to further de-escalation.

In Syria, President Bashar Assad, aided by Russia and Iran, crushed a 7-year-old rebellion and the opposition’s dream of ousting him from power. The war is not over, with major fighting still ahead in the rebel-held north. Assad’s inner circle and allied entrepreneurs stand to make a fortune from reconstruction, even if the West won’t contribute in the absence of a political settlement. 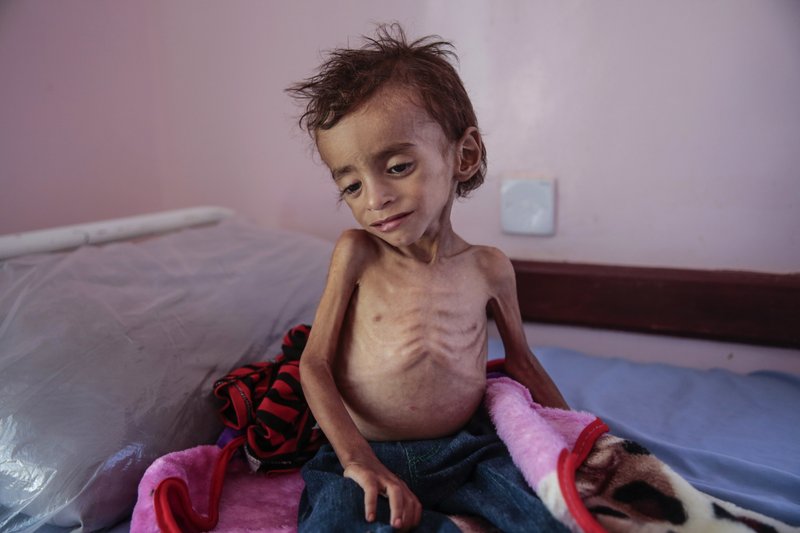 A malnourished boy sits on a hospital bed at the Aslam Health Center in the Yemeni town of Hajjah. (AP Photo/Hani Mohammed)

In Iraq, it’s been a year since the government declared victory over the Islamic State group, but challenges remain, including the rebuilding of devastated cities. Rioting against corruption and poor services in the oil-rich southern region of Basra signaled the urgency of addressing Iraq’s economic problems.

In Libya, rival governments in the east and west have agreed to meet at a national conference in early 2019 to pave the way for a general election. Oil production remains below its pre-2011 levels, and lack of security still prevents major foreign investment or economic growth.

In Iran, hit hard by renewed US sanctions, the currency wildly fluctuated, but the Islamic Republic did not see the same widescale protests that opened the year.

While the US withdrawal from the nuclear deal ended billion-dollar deals for airplane and car manufacturers, the United States allowed many countries to continue importing Iranian oil for now. That led oil prices to plummet, straining the petrodollar economies of Gulf nations. 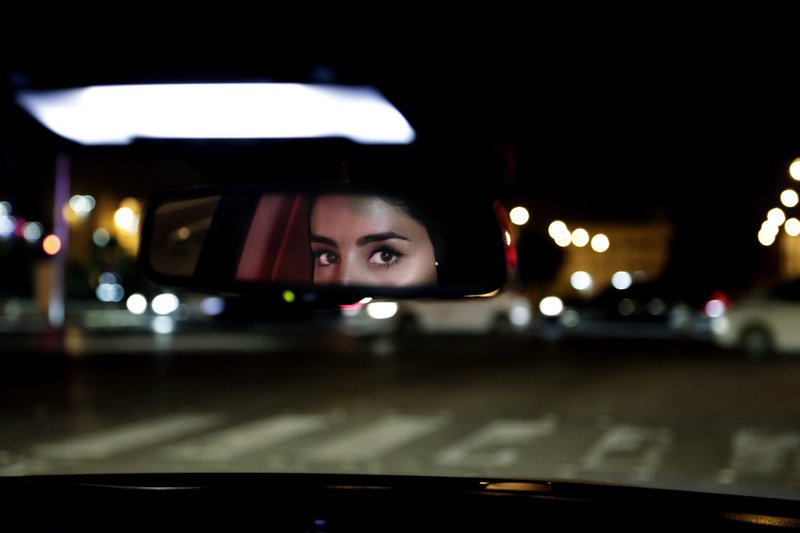 In Riyadh, Hessah al-Ajaji sat behind the wheel for the first time after midnight on June 24 as the kingdom lifted the ban on women driving. (AP Photo/Nariman El-Mofty)

The boycott of Qatar by Bahrain, Egypt, Saudi Arabia and the United Arab Emirates appeared no closer to ending, especially with a last-minute surprise by Doha of pulling Qatar from the Saudi-dominated OPEC oil cartel.

In Egypt, the Arab world’s most populous country with 100 million people, job creation lags far behind an explosive population growth of more than 2 million per year. Investor confidence is improving, but inflation surpassed targets set by the International Monetary Fund.

In politically paralyzed Lebanon, decades of mismanagement and corruption are finally catching up, with a debt of $84 billion heightening concerns of impending economic collapse.

“I wonder what will happen with the rising sense of hopelessness among broad populations,” said Jon Alterman at the Center for Strategic and International Studies in Washington. “Will people just put their heads down and be miserable? Or will a sense that there is no public outlet, no media outlet, lead to some sort of explosion, even if it’s not specifically directed toward change?”

The destructive fallout from Arab Spring uprisings could serve as a deterrent to some.

Israeli Prime Minister Benjamin Netanyahu started the year with a gift from Trump, who recognized Jerusalem as Israel’s capital and then moved the US Embassy to the city in May. Palestinian President Mahmoud Abbas froze ties with the US administration, accusing it of pro-Israel bias concerning the most sensitive issue of the conflict, which sputtered along in 2018. 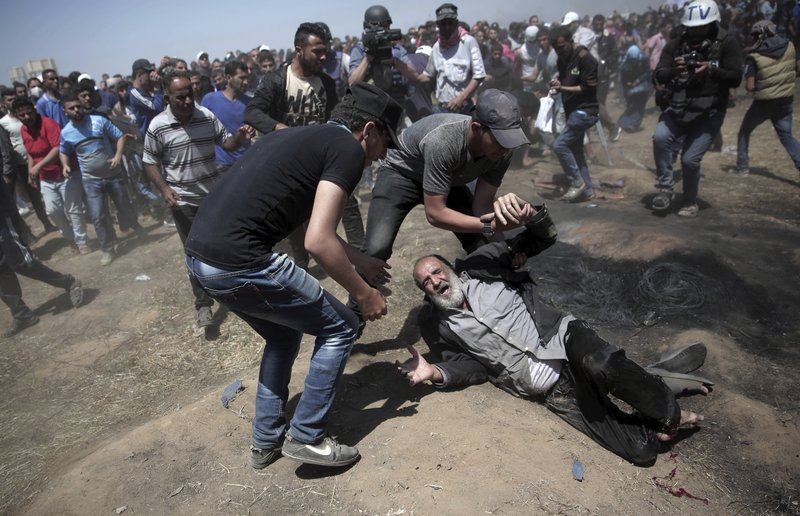 Palestinian protesters in Gaza help an elderly man who fell after being shot by Israeli troops during a rally at the strip’s border with Israel.(AP Photo/Khalil Hamra)

Israel kept building settlements in the West Bank, the Islamic militant Hamas led mass border marches against a decade-old blockade of the Gaza Strip and lone Palestinian assailants carried out sporadic attacks against Israelis. Dozens were killed in 2018, the vast majority Palestinians.

A US peace plan, promised by Trump since the beginning of his term, still hasn’t materialized — to the relief of Abbas, who fears any proposal will at best offer a Palestinian mini-state in Gaza, with a small footprint in the West Bank and east Jerusalem.

With Israeli elections to be held sometime in 2019, a peace plan that calls for even minimal concessions could tear apart Netanyahu’s right-wing coalition. He might not get to run for re-election if a pair of corruption cases moves forward, after police recommended charges against him.

The Trump administration’s staunch support for Saudi Arabia is expected to continue despite the Khashoggi scandal, in part because the alliance with Riyadh serves as a means of pressuring Iran. 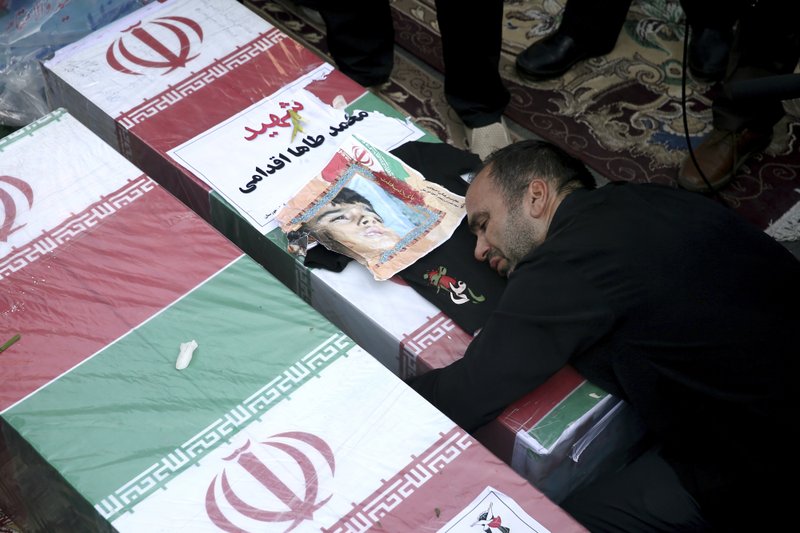 Mohammad Taha Eghadami grieves for his 4-year-old boy who was killed in a terror attack on a military parade in the Iranian city of Ahvaz. (AP Photo/Ebrahim Noroozi)

However, Washington lacks a clear Syria policy. Trump has wavered on whether he wants troops to stay in Syria, with what goal, and appears content to cede ground to the Russians.

In Afghanistan, the administration appointed a special envoy to negotiate a peaceful exit from America’s longest war, but no clear pathway has emerged. Successive presidents have sought to wind down Washington’s presence in Afghanistan, to no avail.