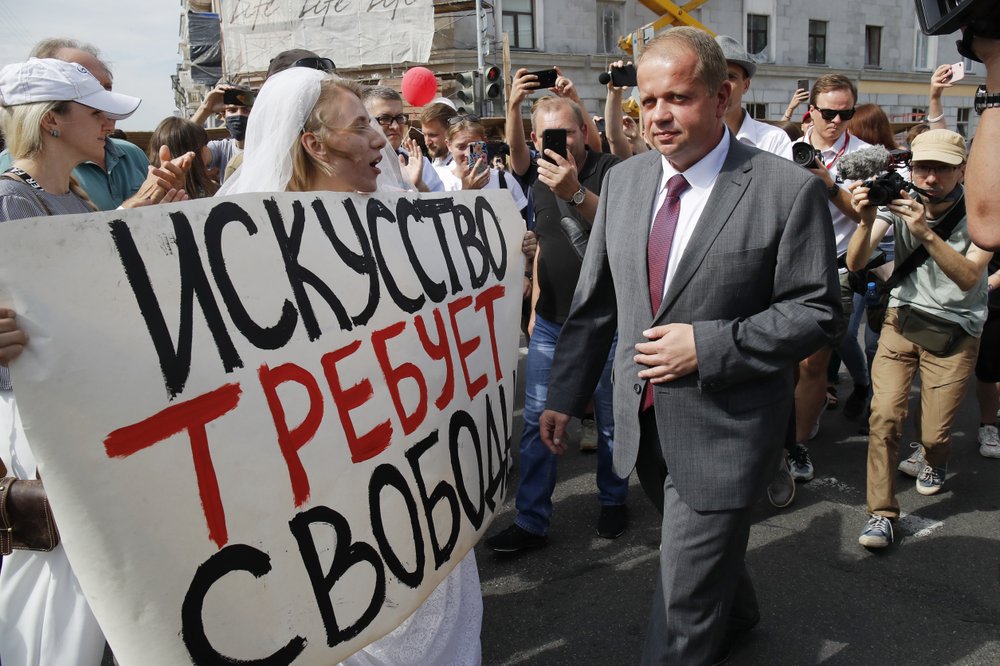 MINSK, Belarus (AP) — Factory workers in Belarus continued to strike on Tuesday, turning up pressure on the country’s authoritarian leader to step down after winning an election they say was rigged.

More state-controlled companies and factories on Tuesday joined the strike that began the day before and encompassed several major tractor factories in Minsk, a huge potash factory in Soligorsk that accounts for a fifth of the world’s potash fertilizer output and is the nation’s top cash earner, state television and the country’s most prominent theater.

The strikes follow nine days of unprecedented mass protests against election results that handed President Alexander Lukashenko his sixth term with 80% of the votes while his top challenger Sviatlana Tsikhanouskaya apparently only received 10%.

“The authorities should understand that they are losing control. Only Lukashenko’s resignation and punishment of those in charge of rigging and beatings (of protesters) can calm us down,” head of an independent miners’ union Yuri Zakharov told The Associated Press on Tuesday.

“The people said their ‘no’ to Lukashenko, and we will not back down. The strike will continue and grow until he steps down.”

Lukashenko on Monday dismissed the strikes as insignificant and said he will not cave in to pressure, but appeared nervous as dissent grew.

Also Tuesday, the Belarusian ambassador to Slovakia, Igor Leshchenya, said he has handed in his resignation after coming out with a statement in support of the protests.

In a video released on Saturday, Leshchenya expressed “solidarity with those who came out on the streets of Belarusian cities with peaceful marches so that their voice could be heard.” He said he was shocked by the reports of mass beatings and torture of protesters and accused Belarusian law enforcement of restoring the traditions of the Soviet secret police.

Leshchenya, the first top government official to support the protests against Lukashenko, said in an interview Tuesday that resigning after that was “a logical move.”

The mass protests that drew hundreds of thousands of people have continued despite a brutal response from the police, who in the first four days of demonstrations detained almost 7,000 people and injured hundreds with rubber bullets, stun grenades and clubs. At least two protesters died.

On Tuesday, nearly 1,000 people gathered in front of a theater to support the troupe that gave notice en masse after the theater’s director, Pavel Latushko, was fired after siding with the protesters.

Tsikhanouskaya left the country for Lithuania in a move her campaign said was made under duress. On Monday she announced she was ready to act as a national leader to facilitate a new election. Her top ally, Maria Kolesnikova, said Tuesday a “coordination council” is being formed to represent the people and negotiate the transition of power.

Lukashenko, who has run the ex-Soviet nation of 9.5 million with an iron fist since 1994, bristled at the idea of talks with the opposition.

Kolesnikova argued that the embattled president “should hear his society, hear the people — the majority calls him a former (president).”

“Our goal is to unite society, all of Belarus, so that the Belarusian society has a legitimate institution to negotiate and make demands,” Kolesnikova told the AP on Tuesday.

The council, which will convene for the first time on Tuesday evening, will figure out the best way for transition of power, “be it new elections or some other option,” Kolesnikova said.

Lukashenko said Monday the country could have a new presidential election, but only after approving an amended version of its constitution in a nationwide referendum — an apparent bid to buy some time amid the growing political crisis.

Western officials refused to recognize the election as free or fair and criticized Belarusian authorities for their violent crackdown on protesters. In Brussels, European Council President Charles Michel said an emergency summit of EU leaders would convene Wednesday to discuss the election and crackdown.

Last week, the 27 EU foreign ministers decided to start drawing up a list of people who could face sanctions from the violence.

German Chancellor Angela Merkel spoke with Russian President Vladimir Putin on Tuesday, according to her spokesman Steffen Seibert, and “underlined that the Belarusian government must refrain from violence against peaceful protesters, immediately release political prisoners and enter into a national dialogue with the opposition and (civil) society to overcome the crisis.”

Daria Litvinova in Moscow contributed to this report.

Image: Yuri Bondar, Belarusian Minister of Culture, passes a woman holding a banner reading “Art demands freedom” in Minsk, Belarus, Tuesday, Aug. 18, 2020. Several dozen people gathered in front of the theater to support the troupe that handed in their notice to quit after the theater’s director, Pavel Latushko, was fired. (AP Photo/Dmitri Lovetsky)