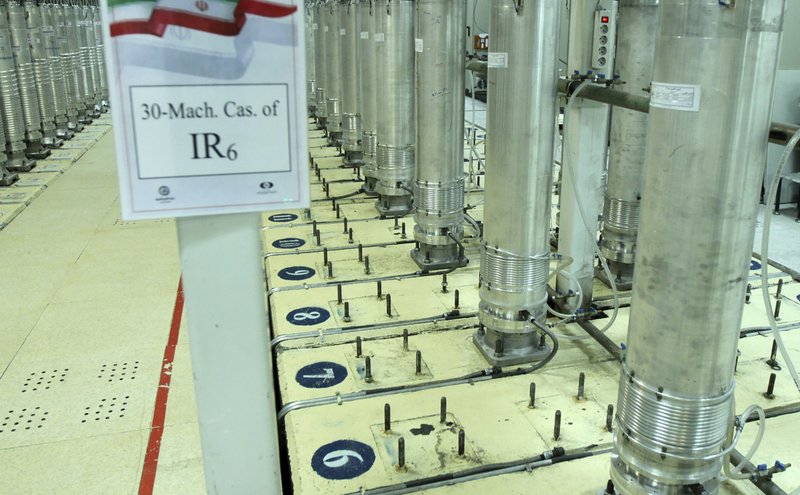 TEHRAN, Iran (AP) — An “incident” damaged an under-construction building Thursday near Iran’s underground Natanz nuclear enrichment facility, though it did not affect its centrifuge operations or cause any release of radiation, a spokesman said.

The affected building, described as an “industrial shed,” was above ground and not part of the enrichment facility itself, said Behrouz Kamalvandi, a spokesman for the Atomic Energy Organization of Iran. The state-run IRNA news agency quoted Kamalvandi as saying there was “no need for concern” over the incident.

However, there was no previously announced construction work at Natanz, a uranium enrichment center some 250 kilometers (155 miles) south of the capital, Tehran. Natanz includes underground facilities buried under some 7.6 meters (25 feet) of concrete, which offers protection from airstrikes.

Ramazanali Ferdowsi, the governor of the town of Natanz, later described the incident as a “fire.” Ferdowsi said both firefighters and rescue teams deployed to the site to handle the incident. He offered no cause for the blaze in his remarks reported by the semiofficial Tasnim news agency.

Natanz, also known as the Pilot Fuel Enrichment Plant, is among the sites now monitored by the International Atomic Energy Agency after Iran’s 2015 nuclear deal with world powers. The IAEA did not immediately respond to a request for comment over the incident.

Located in Iran’s central Isfahan province, Natanz hosts the country’s main uranium enrichment facility. There, centrifuges rapidly spin uranium hexafluoride gas to enrich uranium. Currently, the IAEA says Iran enriches uranium to about 4.5 percent purity, above the terms of the nuclear deal, but far below weapons-grade levels of 90 percent. It also has conducted tests on advanced centrifuges, according to the IAEA.

The US under President Donald Trump unilaterally withdrew from the nuclear deal in May 2018, setting up months of tensions between Tehran and Washington. Iran now is breaking all the production limits set by the deal, but still allows IAEA inspectors and cameras to watch its nuclear sites.

However, Natanz did become a point of controversy last year as Iranian officials refused to allow an IAEA inspector into the facility in October after allegedly testing positive for suspected traces of explosive nitrates. Nitrates are a common fertilizer. However, when mixed with proper amounts of fuel, the material can become an explosive as powerful as TNT. Swab tests, common at airports and other secure facilities, can detect its presence on the skin or objects.

Natanz also remains of particular concern to Tehran as it has been targeted for sabotage before. The Stuxnet computer virus, widely believed to be an American and Israeli creation, disrupted and destroyed centrifuges at Natanz amid the height of Western concerns over Iran’s nuclear program.

Satellite photos show an explosion last Friday that rattled Iran’s capital came from an area in its eastern mountains that analysts believe hides an underground tunnel system and missile production sites. Iran has blamed the blast on a gas leak in what it describes a “public area.”

Image: This photo released Nov. 5, 2019, by the Atomic Energy Organization of Iran, shows centrifuge machines in the Natanz uranium enrichment facility in central Iran. Behrouz Kamalvandi, a spokesman in a report published Thursday, July 2, 2020 by the state-run IRNA news agency, said an “incident” has damaged an under-construction building near Iran’s Natanz nuclear site, but there was no damage to its centrifuge facility. Kamalvandi said authorities were investigating what happened. (Atomic Energy Organization of Iran via AP, File)