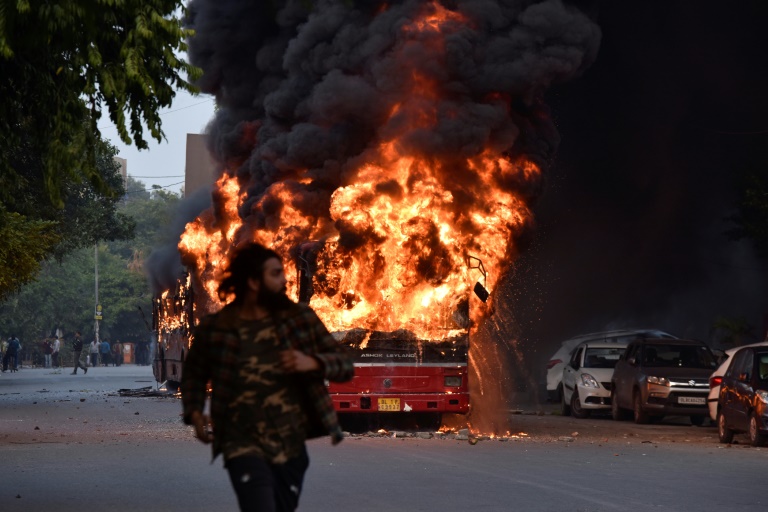 Fresh protests rocked India on Monday as anger grew over new citizenship legislation slammed as anti-Muslim, after six people died in the northeast and up to 200 were injured in New Delhi.

Modi on Monday denied this, tweeting that the new law “does not affect any citizen of India of any religion”, while accusing “vested interest groups” of stoking the “deeply distressing” unrest.

Rahul Gandhi, former opposition Congress chief, tweeted that the law and a mooted nationwide register of citizens also seen as anti-Muslim were “weapons of mass polarization unleashed by fascists”.

The UN human rights office said last week it was concerned the law “would appear to undermine the commitment to equality before the law enshrined in India’s constitution”, while Washington and the European Union have also expressed unease.

On Monday fresh protests took place including in Delhi, Chennai, Bangalore and Lucknow, where hundreds of students — most of them Muslims, television pictures indicated — tried to storm a police station, hurling volleys of stones at officers cowering behind a wall.

The northeast, where even allowing non-Muslims citizenship is opposed by many locals and which in recent days has been the epicenter of protests with six people dead, also saw fresh demonstrations.

In the east in Kolkata, capital of West Bengal, thousands took part in a march led by state premier Mamata Banerjee, a firebrand opponent of Modi. Protestors set fire to tyres on train lines.

The university’s vice-chancellor Najma Akhtar said on Monday that 200 people were injured but police put the number at 39 students hurt with 30 officers also injured, one of them critically.

He denied some media reports that police opened fire.

On the same day, Modi said the citizenship law is “1,000 percent correct” and that Muslims from Pakistan, Bangladesh and Afghanistan are not covered because they have no need of India’s protection.

Modi blamed the Congress party and its allies of “stoking fire”, saying those creating violence “can be identified by their clothes” — a comment interpreted by some as referring to Muslims.

The new law is being challenged in the Supreme Court by rights groups and a Muslim political party, arguing that it is against the constitution and India’s cherished secular traditions.

Ashok Swain, a professor at Sweden’s Uppsala University said that the scale of the protests had caught Modi’s government off guard.

“The protest is getting international attention and also spreading to different parts of the country. This certainly will add pressure on the regime when the economy has failed,” Swain told AFP.

India shuts down internet in hotspot after deadly protests

Indian Kashmir formally ceases to be a state