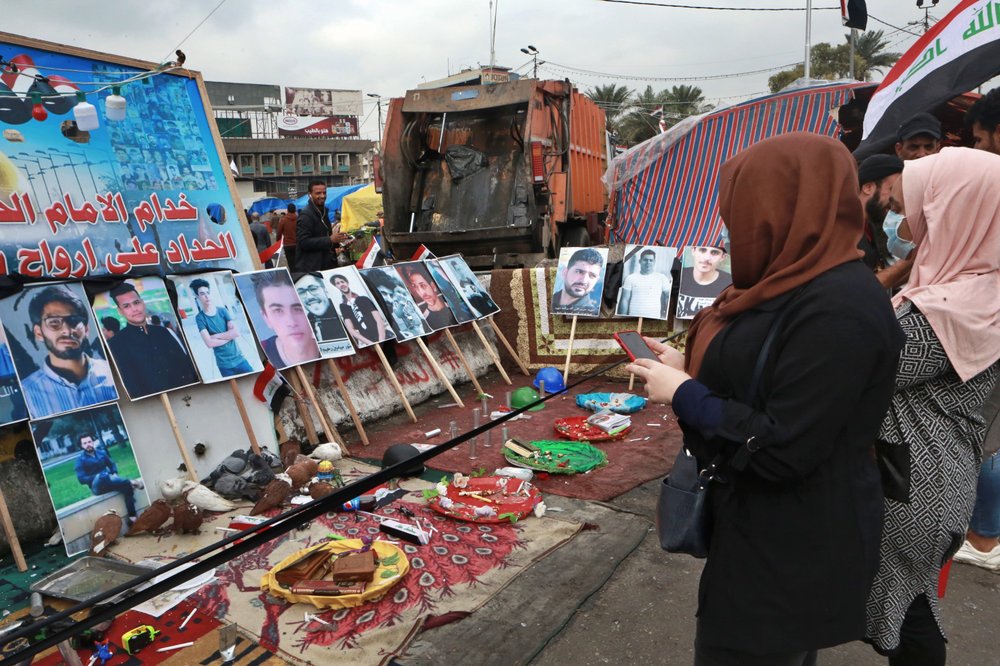 Anti-government protesters in the holy city of Najaf burned tires and hurled them toward the main gate of the Iranian consulate, burning it for the third time in the span of a week. The building was empty at the time of the attack and there were no casualties, according to a police official.

The incident came after hours of tense standoff with security forces earlier Tuesday when protesters surrounded a key shrine in Najaf. Tens of demonstrators gathered around the Hakim shrine, demanding that al-Sadr help them enter and symbolically take control. Sadr commands Saraya Salam, a powerful militia group. A few protesters and some elderly tribal sheikhs were eventually permitted to enter the shrine and inspect it.

The protesters believe the shrine is a center for Iranian intelligence operations, the police official said.

Officials all requested anonymity in line with regulations.

Najaf has been one of the flashpoints in the protest movement, after demonstrators torched the Iranian Consulate there on Nov. 27 and again on Dec. 1. The Hakim shrine has been the focus of recent violence. Three protesters were killed and 24 wounded on Saturday as security forces used live rounds to disperse them from the site. The southern city is the seat of the country’s Shia religious authority.

In an address to the U.N. Security Council on Tuesday, top United Nations envoy to Iraq Jeanine Hennis-Plasschaert deplored the continued use of live ammunition and “non-lethal devices” like tear gas that have caused “horrific injuries or death.” She condemned what she said were “unlawful arrests and detentions” targeting anti-government demonstrators.

The U.N. envoy also questioned the status of the government’s earlier investigations into the use of live fire and other violence, noting that though arrest warrants had been issued, perpetrators had not been brought to account.

Assistant Secretary of State for Near East Affairs David Schenker called the killing of protesters in Nasiriyah “shocking and abhorrent,” in remarks to reporters late Monday.

“The Iraqi people are calling for genuine reform implemented by trustworthy leaders who will put Iraq’s national interests first. Without that commitment to reform, it makes little difference who the prime minister is,” he added.

Officials and experts warned of a potential political crisis because of disagreement among Iraqi leaders over which parties control the largest bloc of seats in parliament.

Abdul Mahdi’s nomination as prime minister was the product of an uneasy alliance between parliament’s two main blocs — Sairoon, led by cleric Moqtada al-Sadr, and Fatah, which includes leaders associated with the paramilitary Popular Mobilization Units headed by Hadi al-Amiri.

In a sign that the political dispute remained unresolved, Sairoon addressed Salih in a letter on Tuesday reiterating that it was the largest parliamentary bloc in parliament with the right to name the next premier.

Based on this, the statement said, “Sairoon cedes this right to the demonstrators.” It did not cite any constitutional provisions that would allow the protesters to actually participate in the next prime minister’s nomination.

Image: Posters of protesters who have been killed in demonstrations and their belongings are displayed in Tahrir Square during ongoing anti-government protests in Baghdad, Iraq, on Tuesday, Dec. 3, 2019 (AP Photo/Hadi Mizban)

Fresh protests gather in Najaf amid talks over new premier