STOCKHOLM (AP) — The trial of an Iranian citizen accused of committing grave war crimes and murder during the final phase of the Iran-Iraq war in the 1980s started Tuesday in Stockholm.

Raisi himself took part as a prosecutor in the so-called “death commission” that executed as many as 5,000 people at the end of Iran’s bloody war with Iraq in 1988, complicating how the West will interact with him as negotiators try to save Tehran’s tattered nuclear deal with world powers.

Noury was arrested in November 2019 when he arrived in Stockholm, the Swedish capital, and has been held in custody since then.

According to Swedish prosecutors, Noury worked in July-August 1988 as an assistant to the deputy prosecutor in the Gohardasht prison outside the Iranian city of Karaj, and allegedly took part in severe atrocities there.

They said Iran’s then supreme leader, Ayatollah Khomeini, issued an order for the execution of all prisoners in Iranian prisons who sympathized and remained loyal with the Iranian opposition group Mujahedeen-e-Khalq, known as MEK.

Due to that order, a large number of prisoners were executed in the Gohardasht prison between July 30 and Aug. 16, 1988, the prosecutors in Sweden said.

“Along with other perpetrators in the prison, (Noury) participated in mass executions and is suspected of having intentionally deprived the lives of a very large number of prisoners who sympathized with the Mujahedeen.”

As for the murder charge, Swedish prosecutors said Noury is suspected of “intentionally killing, together with other perpetrators, a large number of prisoners who sympathized with various left-wing groups and who were regarded as apostates.” Under the Swedish Penal Code, these are not considered to be related to an armed conflict and so the charge is different, the prosecution said.

A large number of these prisoners were executed between August 27 and September 6, 1988, in the Gohardasht prison.

Speaking outside of the Stockholm District Court, Shahin Gobadi, spokesman for the National Council of Resistance of Iran — MEK’s political wing — called the trial “a landmark case.”

“We think the world will eventually understand the extent of the atrocity in Iran and I think this is the beginning of a process that will continue until the Iranian regime leaders, including (Ayatollah) Khomeini and (Ebrahim) Raisi will be brought to justice,” he told The Associated Press.

In 1988, after Khomeini accepted a UN-brokered cease-fire, members of the MEK, heavily armed by Iraq’s Saddam Hussein, stormed across the Iranian border in a surprise attack. Iran ultimately blunted their assault, but the attack set the stage for the sham retrials and executions of political prisoners, militants and others. MEK members comprised many of those killed.

The US government long considered the MEK a terror group for its involvement in killing Americans in the years before Iran’s 1979 Islamic Revolution. The MEK, which now denies being involved in those killings, later found itself taken off the terror list and allowed to leave Iraq for Albania in the years after the 2003 US-led invasion that toppled Saddam.

IMAGE: Supporters of the People’s Mojahedin Organization of Iran protest outside Stockholm’s district court on the first day of the trial of Hamid Noury, in Stockholm, Tuesday, Augusst 10, 2021. 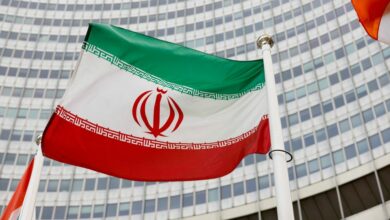