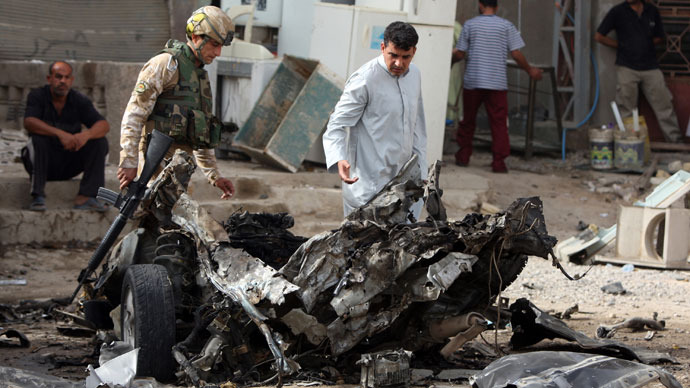 Violence in Iraq has killed more than 500 people in May, AFP figures showed on Tuesday, as authorities struggled to contain a wave of unrest that has raised fears of new sectarian conflict.

And the UN envoy to Iraq urged the country's leaders to meet to resolve long-running political crises that have paralysed the government and been linked to its inability to reduce the violence.

As of Monday, 503 people were killed and 1,273 wounded, making May the deadliest month in at least a year, according to the data, based on reports from security and medical officials.

May is the second month in a row in which more than 400 people have been killed, for a total exceeding 960 people in less than two months.

A wave of attacks, including bombings in Baghdad that mainly targeted Shiite areas, killed 58 people on Monday and wounded 187, officials said.

"I once again urge all Iraqi leaders to do everything possible to protect Iraqi civilians. It is their responsibility to stop the bloodshed now," UN envoy Martin Kobler said in a statement on Tuesday.

"It is the politicians' responsibility to act immediately and to engage in dialogue to resolve the political impasse and not let terrorists benefit from their political differences," he said.

Iraq is faced with various long-running political crises over issues ranging from power-sharing to territorial boundaries that have paralysed the government.

The US embassy, meanwhile, issued a statement in which it said it "strongly condemns the wave of bombings," expressing condolences to the victims.

Iraq has seen a heightened level of violence since the beginning of the year, coinciding with rising discontent among Iraqi Sunnis that erupted into protests in late December.

Members of Iraq's Sunni minority, which ruled the country from its establishment after World War I until Saddam Hussein's overthrow by US-led forces in 2003, accuse the Shiite-led government of marginalising and targeting their community.

Analysts say government policies that have disenfranchised Sunnis, coupled with Shiite-led authorities' refusal to make any major concessions to the protesters, have given militant groups fuel and room to manoeuvre among the disillusioned community.

The government has made some concessions aimed at placating protesters and Sunnis in general, such as freeing prisoners and raising the salaries of Sunni anti-Al-Qaeda fighters, but underlying issues have yet to be addressed.

Violence in Iraq has fallen from its peak at the height of the sectarian conflict in 2006 and 2007, but attacks remain common.