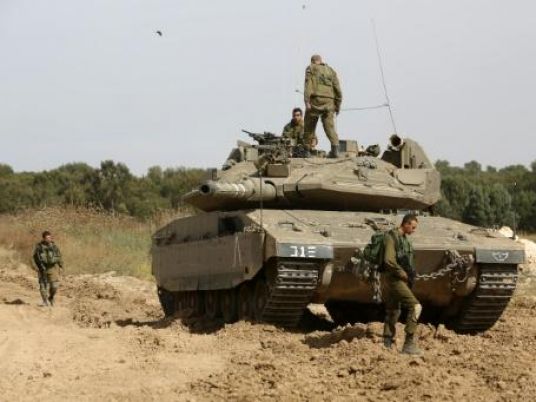 It was the biggest flare-up in months and raised concerns for a ceasefire between Israel and Gaza's Hamas rulers that has held since the last round of major hostilities in the territory ended in summer 2014.

The Israeli army said that a major target of the strikes was suspected infiltration tunnels under the border like those whose destruction it cited as one of the principal achievements of the 2014 conflict.

"Overnight, in response to the ongoing attacks against Israeli forces, an Israel Air Force aircraft targeted four Hamas terrorist infrastructure sites in the northern Gaza Strip," the Israeli military said in a statement.

It gave no word on casualties but medical sources in Gaza said a raid on the Al-Zeitoun district wounded four members of the same family — three children and a 65-year-old man.

The raid hit a garage, its owner Hasan Hasaneen told AFP, saying the vehicles that caught fire were not used by security forces but only for "reconstruction works."

Gaza has been devastated by three conflicts between Israel and its Hamas rulers and other Palestinian factions since 2008, and reconstruction has been painstakingly slow amid an Israeli blockade on all imports that could have military purposes.

But the Hamas-run interior ministry said two raids targeted a base of the military wing of its smaller Islamist rival, Islamic Jihad, causing damage but no casualties.

Over the past two days, Israeli soldiers operating along the fence that tightly encloses the territory have been repeatedly targeted from inside Gaza, the army said.

On Wednesday, the army said it hit five Hamas-run sites in the south of the territory in response to mortar fire across the border.

Those strikes hit around Gaza's derelict international airport near the southern city of Rafah and in nearby farmland, the Hamas-run interior ministry said.

The army also established a closed military zone around the small Israeli border town of Nahal Oz, saying troops had been fired on in the area.

'One fuse too many'

There was no claim of responsibility for the mortar fire that hit Israel.

But both Hamas and Islamic Jihad released statements warning Israel against any escalation.

Hamas's armed wing, the Ezzedine al-Qassam Brigades, said it was ready to respond to Israeli strikes.

"We will not permit this aggression to continue and the enemy should not invoke any reason and leave the Strip immediately," the group said.

The border region has remained relatively quiet since the 2014 conflict, despite allegations by the army that Hamas is building new tunnels from the enclave that could reach into Israel.

Israel cited the destruction of such tunnels as a major achievement of the 50-day conflict in 2014, which killed 2,251 Palestinians, mostly civilians, and 73 Israelis, including 67 soldiers, according to the United Nations.

"Our efforts to locate and destroy the Hamas terror tunnel network are our main priority due to the serious threat to the lives and wellbeing of Israeli civilians," army spokesman Lieutenant Colonel Peter Lerner said.

Most of the sporadic rocket fire from Gaza has been attributed to fringe Islamist groups challenging Hamas's authority, although Israel holds Hamas responsible for all fire from the territory and routinely responds with attacks on its positions.

The UN special coordinator for the Middle East peace process, Nickolay Mladenov, said on Wednesday he was "concerned" about the flare-up on the Gaza border.

"It is critical that peace be maintained to ensure the safety and security of Israelis and Palestinians alike," he said.

During a visit to the Gaza border on Tuesday, Prime Minister Benjamin Netanyahu had hailed its calmest period in years, according to comments reported by Israeli media.

"We are nearing the end of close to two years since Operation Protective Edge," he said, referring to the 2014 conflict.

"These have been the quietest two years we can recall since Hamas came to power."

Daniel Nisman, founder of the Levantine analysis group, said the Netanyahu visit could have triggered a reaction.

"Maybe for Hamas that lit one fuse too many," he told AFP.