Jerusalem (CNN) – Last week’s signing ceremony on the south lawn of the White House, as Israel, the United Arab Emirates and Bahrain normalized relations, was the celebration Prime Minister Benjamin Netanyahu wanted — and the distraction he needed.

“Let us pause for a moment to appreciate this remarkable day. Let us rise above any political divide. Let us put all cynicism aside. Let us feel on this day the pulse of history,” he said last Tuesday. “For long after the pandemic is gone, the peace we make today will endure.”

The normalization deals were the latest feathers in the cap of a leader who’s been on a diplomatic winning streak lately. From the outside, Israel projects the image of a small but mighty country punching far above its weight on the global stage, an innovative “start-up nation” whose thousands of tech firms attract billions in foreign investment each year.

At home it’s a different story, however. The second wave of coronavirus infections in Israel long ago eclipsed the first, forcing the country into a second general lockdown that has shuttered schools, restaurants, entertainment venues and more. And while the coronavirus may be the most pressing challenge facing Netanyahu right now, it’s far from the only one.

The 70-year-old leader is being attacked from both left and the right, not only for his handling of the public health crisis, but also for mismanagement of the economy, his response to his criminal trials, and more. 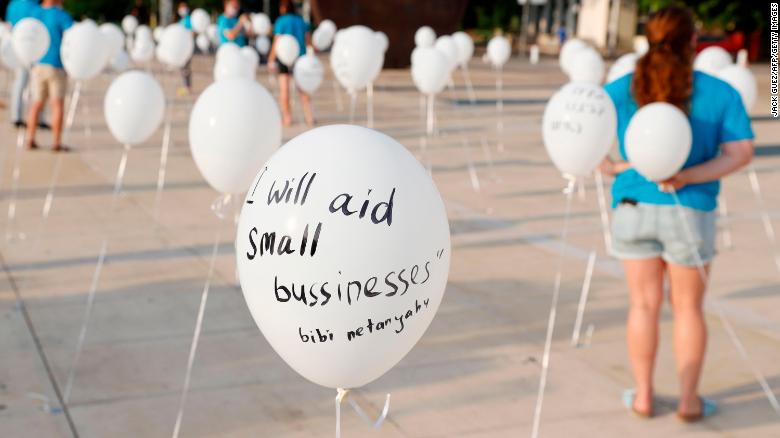 Balloons in Tel Aviv on September 15, installed to symbolize promises made by Netanyahu that protesters say he failed to keep.

“We have a dysfunctional government, good at producing ceremonies in the White House, bad at running a country,” said opposition leader Yair Lapid. “This is the worst failure Netanyahu ever experienced and we are experiencing it with him … or because of him.”

At home, weekly protests have swelled outside the Prime Minister’s residence in Jerusalem, where thousands of people have come out and called on Israel’s longest-serving leader to resign. The angry crowd, undeterred by a steady barrage of attacks from Netanyahu’s political allies, hold signs that read “Crime Minister” and “Bibi Go Home.”

This past weekend, in the first protest since Israel reimposed a general lockdown, eleven protesters were arrested, police said.

Unemployment remains near 19 percent, according to the Israel Unemployment Service, and an already fragile economy will suffer another blow during the current lockdown. (The Central Bureau of Statistics, which uses a different set of criteria for determining unemployment, says the current rate is between 10.4 percent and 11.8 percent.)

Restaurant owners, frustrated as they face a closure that threatens their livelihoods, smashed plates on the floor in protest. Some are more defiant, saying they plan to keep their businesses open.

“No one is caring for us, we have to​ care for ourselves,” restaurateur Yoni Salomon told Israel’s Kann News. “We won’t let anyone take our most basic rights — there is no sense in this closure and I’ll deal with the fine.”

Exemplary leadership from the top has also been noticeably lacking. Despite Netanyahu stressing the importance of wearing masks and social distancing, some of his ministers have been photographed without face coverings during cabinet meetings, and two of Netanyahu’s aides have ​been accused of violating quarantine regulations ​within the last week.

The lockdown restrictions themselves are a study in bureaucratic legalese, often adjusted and tweaked at the last second so as not to anger Netanyahu’s ultra-Orthodox coalition partners, or any other group with its own interests and goals that the Prime Minister decides he cannot afford to offend.

The current Israeli government is the largest in the country’s 72-year history, a so-called unity government bringing together — at least in theory — the two main political parties: Netanyahu’s Likud party and alternate Prime Minister Benny Gantz’s Blue and White party. The bloated political Frankenstein, with 34 ministers and 8 deputy ministers, was fabricated with bits and pieces broken off from existing ministries to create additional jobs for politicians to fill, such as the position of alternate Prime Minister and the Ministry of Higher Education and Water Resources.

And yet despite the government’s size, it remains almost exclusively a one-man show. Netanyahu didn’t even notify his Foreign Minister or Defense Minister​– who happens to be Benny Gantz — about the agreement with the United Arab Emirates until it was announced publicly, claiming he was concerned they would leak the news.

This government, specifically designed to handle the coronavirus crisis, was officially sworn in on May 17. ​

On that day, Israel recorded just 11 new cases of Covid-19, according to Ministry of Health data. There were 44 patients on ventilators and 3,403 active cases across the country, out of a total of 16,617 cases.

At the time, critics quipped that the government could put a government minister next to each patient on a ventilator.

Four months later, Israel’s unity government has abjectly failed in its self-declared primary mission. As of Wednesday morning, there were 54,322 active cases in Israel out of a total of 200,041 cases since the beginning of the pandemic.

The Ministry of Health recorded 6,861 new cases Tuesday, with 171 patients on ventilators. Across the country’s beleaguered hospital system, 634 patients were in serious condition.

“Israelis are extremely pessimistic as a result of the corona crisis, and the perceived mismanagement of the economic and health aspects of the crisis,” said Yohanan Plesner, President of the Israel Democracy Institute (IDI). A former politician, Plesner said he’s never seen anything like the problems within this current government.

A recent survey from the IDI showed that Israelis overwhelmingly support the normalization agreement with the United Arab Emirates, but that hasn’t translated into a sense of trust in government or confidence about the future of the country.

Approximately two-thirds of Israelis believe the national mood is either moderately pessimistic or very pessimistic, according to the survey results, conducted by the Midgam Institute and prepared by the Guttman Center for Public Opinion and Policy Research. ​

“Supposedly, this should have been a national unity government that is steering us out of the crisis, creating the necessary reforms to prepare us for the post-corona era; instead it’s a government that is in total paralysis,” Plesner said.

And yet Netanyahu displayed his brash brand of confidence last Thursday, when he tried to assure Israeli citizens that they’re in good hands.

“The main thing I am telling you is that health and the economy are in our hands. This is the time for responsibility — personal responsibility and mutual guarantee. We will defeat the coronavirus but only together will we do so,” Netanyahu said.

Netanyahu boasted about making peace with two Arab nations in 29 days, from August 13th to September 11th. During that same time period, approximately 62,000 thousand Israelis were diagnosed with Covid-19, while 446 citizens died of the disease. But when Netanyahu was asked last week who should shoulder the blame for the failure to contain the virus, he responded, “There are no failures, only achievements.”

The comment marked a strikingly different tone from that of President Reuven Rivlin just a few days later, when Israel’s head of state offered a forthright apology to the nation for the failure of the country’s leadership to lead.
“I know that we have not done enough as a leadership to be worthy of your attention.

You trusted us and we let you down,” said Rivlin. “You, the citizens of Israel, deserve a safety net that the country gives you. Decision-makers, government ministries, policy implementers must work for you and only for you — to save lives, to reduce infection, to rescue the economy. I understand the feeling that none of these were done satisfactorily.”

If Israel’s public health policy is under fire, its economic policy-making is even more sclerotic. The last national budget was passed in 2018, and Netanyahu and Gantz were unable to reach agreement on a new one last month, so they decided instead to simply postpone for a few months in the interests of keeping their government afloat.

The head of the budget division in the Ministry of Finance quit his job, joining his counterpart at the Ministry of Health’s public health division, who walked out a few months earlier. Both wrote fiery resignation letters critical of the country’s leadership or lack thereof.

And yet from the lofty position of Israel’s Prime Minister, ​none of the above counts as the number one problem. Netanyahu’s biggest issue is the fact he has been charged with bribery and fraud and breach of trust. He continues to maintain his innocence, attacking the attorney general, investigators, and the judicial system, accusing them of an attempted coup driven by the left-wing and the media.

His trial begins in earnest in January, when a panel of judges will begin hearing from witnesses. It is hard to imagine a White House ceremony big enough to draw attention away from those criminal proceedings.​​​


Image: Israelis hold national flags during a protest against Prime Minister Benjamin Netanyahu outside the national parliament in Jerusalem, Monday, March 23, 2020. The opposition has accused Netanyahu of using the coronavirus crisis as cover to undermine the country’s democratic institutions. With the country in near-shutdown mode, Netanyahu has already managed to postpone his own pending criminal trial and authorize unprecedented electronic surveillance of Israeli citizens. (AP Photo/Sebastian Scheiner)