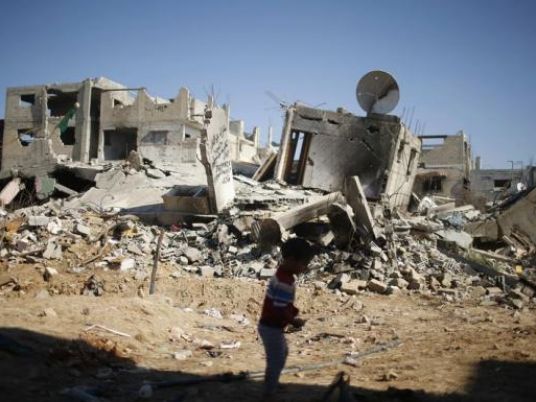 Israel will issue a report on Sunday arguing its 2014 Gaza offensive was lawful, a move aimed at pre-empting the release of findings of a UN war crimes investigation that Prime Minister Benjamin Netanyahu dismissed as a waste of time.
Launched after a surge of cross-border rocket fire by Hamas and other Palestinian armed groups, Israel's two-month offensive last year, which included heavy shelling and air strikes into the densely populated enclave, killed more than 2,100 Palestinians, mostly civilians.
Sixty-seven Israeli soldiers and six civilians in Israel also died in the conflict.
"Whoever wants to know the truth, let them read this report," Netanyahu, accusing Hamas of hiding behind non-combatants by deliberately operating in crowded Palestinian neighborhoods, told his cabinet in remarks made public.
"Whoever wants to continue with baseless blaming of the state of Israel, let them waste time reading the report by the UN commission. We, for our part, will continue protecting our soldiers. They will continue protecting us."
The inquiry by the UN Human Rights Council into possible war crimes by Israel and the Islamist Hamas militants controlling the Gaza Strip is due to publish its findings this month, having postponed the release from March to consider further evidence.
Israel says it did everything possible to prevent civilian casualties. Israel's critics accuse it of using excessive force and acting with impunity.
In March, Makarim Wibisono, the UN Special Rapporteur on Human Rights in the Palestinian territories, said the disparity in casualty figures on the two sides "reflects the (skewed) balance of power and the disproportionate cost borne by Palestinian civilians, raising questions as to whether Israel adhered to the international law principles of distinction, proportionality and precautions."
No Israeli cooperation
Israel declined to cooperate formally with the UN council, accusing it of pro-Palestinian bias. The council's former chief investigator, William Schabas, resigned in February over consultancy work he previously did for the Palestine Liberation Organization.
The Netanyahu government's report was scheduled for release by the Foreign Ministry in Jerusalem at 2 p.m. (0700 ET).
On Friday, the Friends of Israel Initiative, a private European advocacy group, published assessments by several retired military chiefs from various countries defending Israel's conduct of the Gaza war.
In March, the Jewish Institute for National Security Affairs, another pro-Israel advocacy group based in the United States, published a similar report