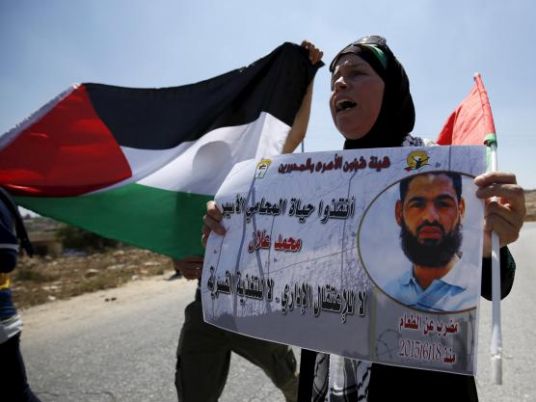 Lawyers for a Palestinian in the ninth week of a hunger strike against his detention without trial took his case on Monday to Israel's Supreme Court, where a new offer to free him in exchange for exile was rebuffed.

The condition of Islamic Jihad activist Mohammed Allan, who is unconscious in an Israeli hospital, is being closely monitored by opposing forces in an Israeli-Palestinian conflict that could erupt in new violence if he dies.

Israel sees his hunger strike, which began more than 60 days ago, as a powerful challenge against "administrative detention", a practice that has drawn criticism from Palestinians and human rights groups but which Israel calls a security necessity.

It fears that his unconditional release – Allan's lawyers argued that in his current condition he posed no security threat – would only encourage several hundred other Palestinian detainees suspected of anti-Israeli activities to refuse food.

As the hearing got under way in Israel's highest court, the Justice Ministry said it would consider freeing Allan, 31, if he agreed to be exiled abroad for four years.

The court issued no ruling, urging the sides to negotiate further before reconvening for another hearing on Wednesday.

Israel has not formally charged Allan with any crime but alleged that he was involved in "grave terrorism" on behalf of Islamic Jihad, which has threatened attacks against Israel if he dies.

Jameel Khatib, one of his lawyers, rejected the offer of exile, calling instead for his immediate release but also raising the possibility of setting Sept. 23, the start of a Muslim holiday, as a date for freeing him.

In its High Court response, the Justice Ministry said "classified information" warranted keeping Allan detained, unless he was sent abroad.

Doctors at Barzilai Medical Centre, where Allan is on a respirator and receiving intravenous nutrients, described his condition as critical but stable and said they would consider later in the day whether to try to wean him off the machine.

Daniel Jacobsen, a Barzilai physician, told the court that should Allan regain consciousness and say that he wanted to discontinue treatment, the staff would honour his wishes.

In that case, he said, the patient would likely die in a very short time if no medical assistance was given.

Israel's medical association has ordered doctors not to abide by a new law that could enable them to force-feed a hunger-striker. It has denounced the law as unethical and a violation of international conventions.

Highlighting the tensions stoked by Allan's case, five Jews and four Arabs were arrested on Sunday during street confrontations touched off by a march toward Barzilai hospital by supporters of the hunger-striker, Israeli police said.

In 2011, under a deal in which more than 1,000 Palestinians were freed by Israel in exchange for Gilad Shalit, a soldier held in the Gaza Strip, 42 Palestinian prisoners were exiled to countries in the Middle East. Israel said at the time they were too dangerous to be allowed to return to the West Bank or Gaza.