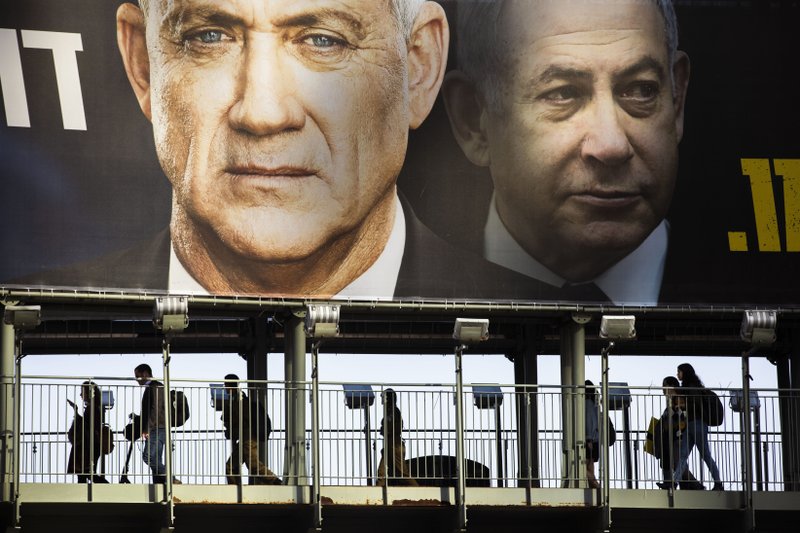 JERUSALEM (AP) — After three deadlocked and divisive elections, and a year and a half of political paralysis, Israel was finally swearing in a new government on Thursday, with Prime Minister Benjamin Netanyahu securing a historic fifth term in office thanks to a controversial power-sharing deal with rival-turned-partner Benny Gantz.

Netanyahu and Gantz, a former military chief, announced last month they would be putting their differences and animosity aside after three hard-fought campaigns to join forces to steer the country through the coronavirus crisis and its severe economic fallout.

It came at the price of the dissolution of Gantz’s Blue and White party and reneging on his key campaign promise not to serve under Netanyahu, who has been indicted of corruption charges and faces an upcoming criminal trial. Their much-scrutinized coalition deal, resulting in the most bloated government in Israeli history and potential clauses to help Netanyahu cling to power, could only come about after the country’s Supreme Court ruled it had no legal grounds to block it.

Despite the criticism, Gantz argued that teaming with Netanyahu offered the country its only way out of the prolonged stalemate and prevented Israel from being dragged once again to another costly election that would have been its fourth in just over a year.

The ceremony at parliament introducing the country’s 35th government is set to kick off late Thursday, under strict social distancing guidelines. Last-minute jockeying Thursday over Cabinet appointments could delay the event.

The deal calls for Netanyahu to serve as prime minister for the government’s first 18 months before being replaced by Gantz for the next 18 months, with their blocs having a similar number of ministers and virtual veto power over the other’s major decisions.

Yohanan Plesner, president of the non-partisan Israel Democracy Institute, said that the main achievement was the mere fact that it should allow the government to resume functioning after the longest political deadlock in Israeli history. But he said the deep distrust between the opposing camps following a prolonged campaign of aggressive, even violent, rhetoric left doubts on how they could govern together.

“The jury is still out if indeed the political deadlock is over and if we have a broad government that will exercise its authority,” he said. “The main tests of the new government are the paralysis test and the reconciliation test.”

Gantz will start out as defense minister, with party colleague and fellow retired military chief Gabi Ashkenazi serving as foreign minister. Netanyahu’s top deputy in Likud, outgoing Foreign Minister Israel Katz, will become finance minister. Yariv Levin, perhaps Netanyahu’s closest ally, will become the new parliament speaker. The coalition will also include a pair of ultra-Orthodox Jewish parties and some other individual defectors to add up to 73 out of parliament’s 120 members.

The main point of contention for critics has been the newly created position of “alternate prime minister,” a post that could allow Netanyahu to remain in office even after the swap and throughout his corruption trial and a potential appeals process. There are also deep suspicions about whether Netanyahu will keep his part of the bargain and ultimately cede the premiership to Gantz.

Still, the new position is supposed to enjoy all the trappings of the prime minister, including an official residence and, key for Netanyahu, an exemption from a law that requires public officials who are not prime minister to resign if charged with a crime.

Netanyahu has been indicted with fraud, breach of trust and accepting bribes in a series of scandals involving trading favors with wealthy media moguls. He denies any wrongdoing and blames the charges on a media-orchestrated plot to oust him. Since his indictment last fall he has repeatedly lashed out at the country’s legal system as well, with his political allies taking special aim at the high court and accusing it of overreach and political interference. His legal woes and fitness to serve were central issues in the recent election campaigns.

Another hot topic will be Netanyahu’s intention to introduce Israeli plans to annex large parts of the West Bank as early as this summer. The coalition agreement allows him to present an annexation proposal as soon as July 1. US Secretary of State Mike Pompeo arrived Wednesday for a lightening-quick visit to discuss it as part of a Trump Mideast plan that envisions handing 30 percent of the West Bank to permanent Israeli control.

The Palestinians claim the entire West Bank, captured by Israel in the 1967 Mideast war, as the heartland of an independent state. Annexing chunks of this territory would likely put an end to the Palestinians’ already diminishing hopes of a two-state solution and would anger the international community, which overwhelmingly supports Palestinian statehood.

Gantz says he will only support such a move with international backing. By including two members of the more dovish Labor party in his bloc, he looks to be tempering the ambitions of Netanyahu’s nationalist base to push for annexation before the US elections in November — after which Trump could be replaced by Joe Biden, who has said he opposes unilateral annexation.

Netanyahu’s plan also took a setback when his longtime religious nationalist allies, the pro-settler Yemina party, opted not to join the coalition after Netanyahu rejected its demands for key spots.

Naftali Bennett, the outgoing defense minister, said in a Facebook post that Netanyahu “chose to get rid of Yemina, which was his nationalist backbone,” and that his party would serve the country from the opposition instead.

Still, Netanyahu looks to have a parliamentary majority for annexation if it comes up for a vote.

Image: In this Feb. 18, 2020 file photo, people walk on a bridge under an election campaign billboard for the Blue and White party, then an opposition party led by Benny Gantz, left, and showing Israeli Prime Minister Benjamin Netanyahu, in Ramat Gan, Israel. After three deadlocked and divisive elections, and a year and a half of political paralysis, Israel is finally swearing in a new government, with Netanyahu securing a historic fifth term in office thanks to a controversial power-sharing deal with rival-turned-partner Gantz. The deal calls for Netanyahu to serve as prime minister for the government’s first 18 months before being replaced by Gantz. (AP Photo/Oded Balilty)