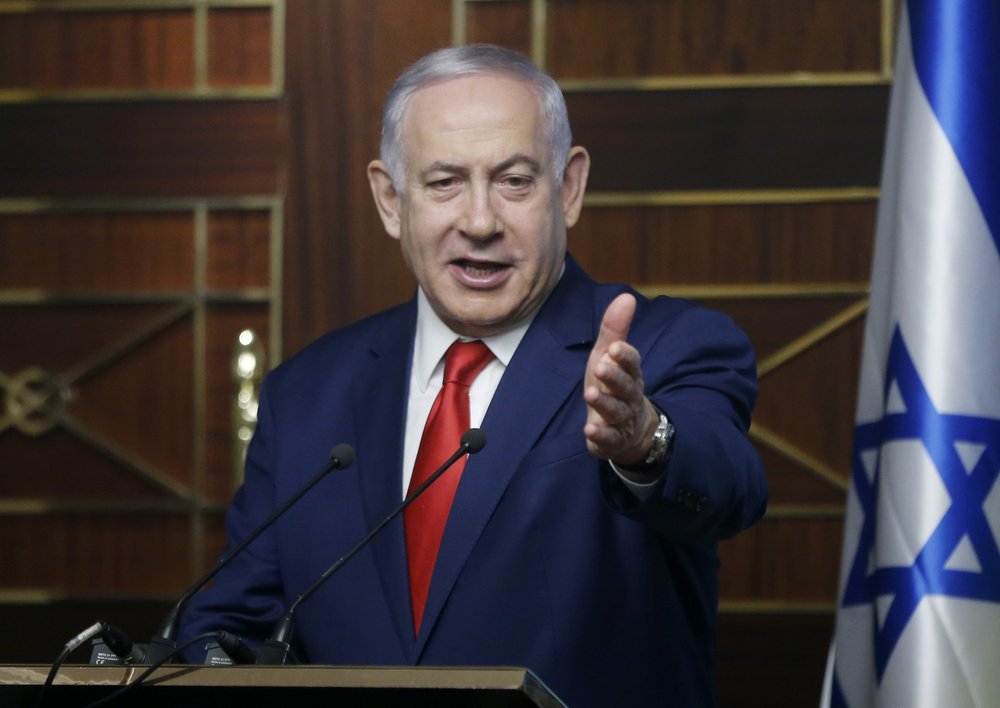 JERUSALEM (AP) — Israeli Prime Minister Benjamin Netanyahu ordered the military on Monday to cut fuel transfers to Gaza in half in response to rocket attacks from the coastal strip, raising tensions along Israel’s southern border in addition to a renewed threat from the north amid reported Israeli strikes on Iranian targets in Syria, Iraq and Lebanon.

Netanyahu also instructed his staff to prepare plans for building a new neighborhood in a West Bank settlement where a teenage Israeli girl was killed in an explosion blast last week. Israel said the blast was a Palestinian attack.

The flurry of activity comes amid a massive manhunt by Israeli troops for the 17-year-old’s killers and dire warnings from Lebanon’s Hezbollah leader of an imminent attack, just weeks before an unprecedented repeat Israeli election.

Netanyahu ordered the Gaza measure to take effect immediately and until further notice. The cut is expected to exacerbate the already dire flow of electricity in the impoverished coastal strip. The move follows airstrikes the military carried out overnight in the Gaza Strip, after three rockets were launched from the territory into southern Israel.

The military said the airstrikes included one on the office of a Hamas commander in the northern Gaza Strip. There were no reports of casualties.

Air raid sirens warning of an incoming attack wailed late on Sunday during an outdoor music festival in the Israeli border town of Sderot, sending panicked revelers scurrying for cover. The military said two rockets were intercepted by its missile defense system.

The rocket attack was the latest in a recent uptick following a relative lull that has threatened to unleash another round of fighting along the volatile Gaza-Israel border.

“Hostile elements near and far, attempting to ignite a war, are dragging you into violence and destroying the stability and security of your home,” wrote Maj. Gen. Kamil Abu Rukun, the coordinator of government activities in the territories, in a direct message to Gaza residents in Arabic on his Facebook page.

The continued impasse, in which Gaza’s humanitarian crisis has been highlighted by the occasional outburst of violence, has also begun to spark criticism in Israel, where officials have been advocating for a stronger military response alongside a need to address the civilian needs of Gaza’s impoverished 2 million residents.

“Israel’s strategy over the past few years has been to maintain the situation as it is,” retired general Guy Tzur told Israel’s Army Radio. “Therefore we are in a strategy of ‘rounds’ (of violence) and this does nothing to change the situation … we need to establish deterrence on the one hand and provide serious humanitarian relief on the other.”

In the West Bank, Israel is still reeling from the deadly blast Friday at a water spring that killed Rina Shnerb, 17, from the settlement of Dolev, and wounded her brother and father. As politicians paid the family condolence visits, Netanyahu announced he has ordered his staff to prepare plans for building a new neighborhood in Dolev that would have about 300 residential housing units.

“We will deepen our roots and strike at our enemies. We will continue to strengthen and develop the settlements,” Netanyahu said in a statement.

The flare-ups come as Israel has also dramatically stepped up its campaign against Iranian military aggression in the region. In recent days, Israel has acknowledged attacking targets near the Syrian capital, Damascus, to thwart what it called an imminent Iranian drone strike against Israel.

Israel has carried out hundreds of airstrikes in Syria in recent years, most of them aimed at arms shipments believed to be headed from Iran to its Shiite proxy Hezbollah. But direct clashes between Israel and Iranian forces have been rare, and Israel has typically been wary of publicly acknowledging them for fear of sparking a fierce response that could deteriorate into all-out war.

Lebanese officials reported that Israeli warplanes also attacked a Palestinian base in eastern Lebanon near the border with Syria early Monday, a day after an alleged Israeli drone crashed in a Hezbollah stronghold in southern Beirut while another exploded and crashed nearby.

Israel considers Iran to be its greatest enemy and has repeatedly vowed that it will not allow Iran to establish a permanent military presence in Syria, where Iranian troops have been supporting President Bashar Assad during the country’s eight-year civil war.