JERUSALEM (AP) — Israel’s president Thursday asked the Knesset to choose a new prime minister, giving parliament three weeks to agree upon a leader or plunge the country into an unprecedented fourth consecutive election in just over a year.

President Reuven Rivlin made the move after his prime minister-designate, former military chief Benny Gantz, and Prime Minister Benjamin Netanyahu failed to reach a power-sharing deal by a midnight deadline.

The bitter rivals had pledged to form an “emergency” government to steer the country through the coronavirus crisis, which has ravaged the economy and sent unemployment to record highs. But after weeks of talks, including a final 48-hour extension granted by Rivlin, the president said he had lost confidence in their chances of striking a deal.

“I am informing you that I do not see the possibility of forming a government and I entrust the formation of a government to the Knesset,” he wrote in a letter to parliament. “I hope that the Knesset members will be able to form a majority in such a way that a government can be formed as soon as possible and to prevent a fourth round of elections.”

The decision by the president, a figurehead position that oversees post-election coalition talks, does not rule out a deal between Netanyahu and Gantz. After the deadline passed, Netanyahu’s Likud and Gantz’s Blue and White said they would continue their negotiations Thursday. Netanyahu also said he had invited Gantz to another meeting in the evening.

They now have a final three-week deadline to wrap up a deal. Otherwise, the Knesset would dissolve and trigger another election.

But Netanyahu appears to have gained some leverage. With Gantz no longer holding the presidential “mandate” to put together a coalition, Netanyahu could search for other options.

A total of 59 lawmakers have endorsed Netanyahu, leaving him just shy of a majority in the 120-seat parliament. While continuing to speak to Gantz, he may also try to lure two lawmakers from his opposition in hopes of putting together a narrow government.

The Knesset could hypothetically choose a third candidate as prime minister. But there do not seem to be any viable alternatives that could muster the needed support of 61 lawmakers.

A deal between Gantz and Netanyahu would require major compromise by both men. During three bitter campaigns over the past year, Gantz vowed never to serve in a government under Netanyahu, who has been indicted on a slew of corruption charges. The long-serving Netanyahu, meanwhile, would likely be forced to step aside halfway through the term and allow Gantz to serve as prime minister in a rotating power-sharing deal.

Last month’s election, just like campaigns last September and April, ended with no clear winner. But with a slight majority of lawmakers endorsing him, Gantz was given the first shot at building a coalition.

Although his backers are deeply divided, they were united in their animosity toward Netanyahu, and he began to move forward with legislation that would have disqualified the indicted Netanyahu from serving as prime minister in the future.

But with the virus crisis worsening, and his own shaky alliance fraying, Gantz made an about-face late last month and accepted an offer from Netanyahu to pursue a joint government to deal with the pandemic. The move drew heavy criticism from Gantz’s supporters and caused his Blue and White alliance to crumble, leaving him with a faction of only about half its original size.

Israel has reported over 12,500 cases and at least 130 deaths from the outbreak.

Netanyahu and Gantz appeared close to a rotation deal last week. But negotiations stalled, reportedly over a demand by Netanyahu to have more influence over judicial appointments.

Netanyahu is awaiting trial on charges of bribery, breach of trust and fraud. He has denied any wrongdoing and portrays himself as a victim of a media and judicial witch hunt.

After three nasty campaigns, plenty of distrust and bad blood remain. Despite his calls for unity, Netanyahu may actually be angling for another election to capitalize on what has generally been regarded as his capable handling of the coronavirus crisis.

It also would allow him to remain in the prime minister’s post for at least several more months to fight his looming trial. Citing the coronavirus crisis, Netanyahu’s hand-picked justice minister has already delayed the trial by shuttering most of the court system.

Image: In this March 1, 2020 file photo, people walk next to election campaign billboards showing Israeli Prime Minister Benjamin Netanyahu, right, and Benny Gantz, left, in Bnei Brak, Israel. Israel’s president on Sunday, April 12, 2020, turned down a request from Blue and White party leader Benny Gantz for a two-week extension to form a new coalition government. The announcement means that Gantz and Netanyahu have a midnight deadline on Monday night to reach a power-sharing deal. If they fail, the country could be forced into a fourth consecutive election in just over a year. (AP Photo/Oded Balilty, File) 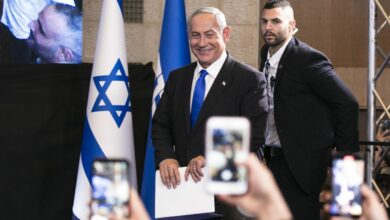