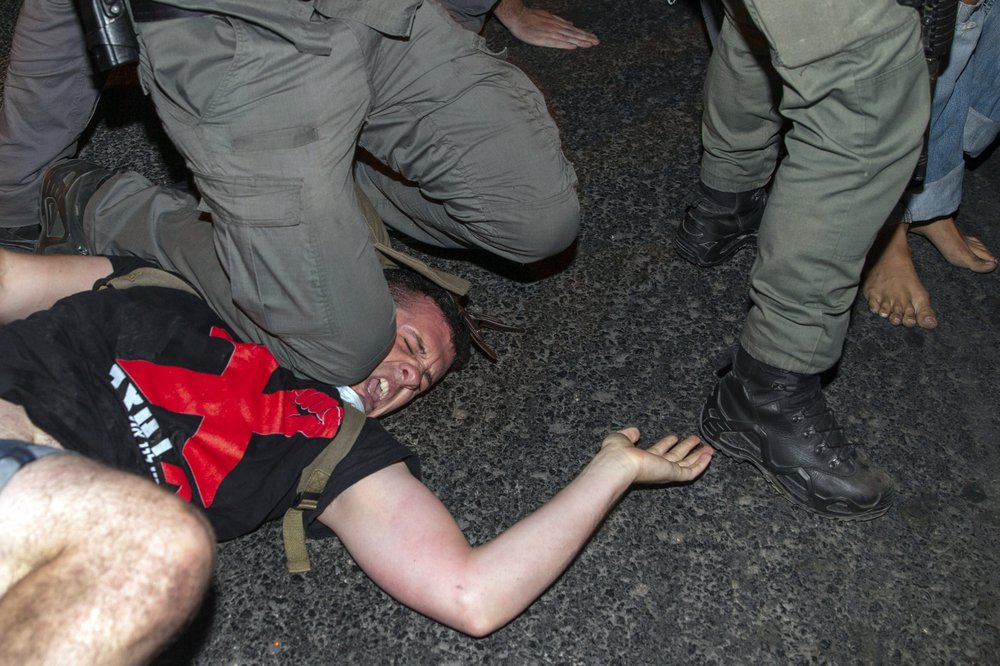 JERUSALEM (AP) — After a night of intense protests against Prime Minister Benjamin Netanyahu and his government, dozens of Israeli demonstrators chained themselves together and briefly blocked the entrance to parliament on Wednesday morning.

Police arrested four and broke up the gathering, which was called to protest an upcoming vote to grant the government sweeping authority to bypass parliament in enacting measures to combat the rapid spread of the coronavirus. But it came amid a fresh outpouring of discontent with Netanyahu.

The protests have since drawn a younger crowd and have grown more defiant. In the past week, thousands of Israelis have participated in some of the largest demonstrations in nearly a decade against the long-time prime minister, as public discontent bubbled over. Netanyahu has come under growing criticism for holding office while on trial for corruption, pushing for seemingly anti-democratic measures under the guise of combating the virus and mismanaging the country’s deepening economic crisis.

On Tuesday night, a large coalition of protest groups combined to march through the streets of Jerusalem from Netanyahu’s official residence to the Knesset, Israel’s parliament. They beat drums, banged on pots and blared on trumpets while calling for the prime minister’s resignation and holding banners reading, “the Israeli spring is here.”

Toward the end, a young women climbed atop a mounted candelabra, the national symbol, and stripped off her shirt in protest. Police said they arrested 34 people who were involved in the disturbances, deploying a heavy hand in the arrests.

Netanyahu has seen his popularity plummet in recent weeks as his corruption trial has gotten underway, and as his bloated, “emergency” coalition government — formed specifically to handle the crisis — has fumbled managing the pandemic.

Netanyahu is on trial for a series of cases in which he allegedly received lavish gifts from billionaire friends and traded regulatory favors with media moguls for more favorable coverage of himself and his family. The prime minister has denied any wrongdoing — accusing the media and law enforcement of a witch hunt to oust him from office — and has refused to step down.

Israel received praise for its early handling of the coronavirus crisis and imposing tight movement restrictions. But since reopening the economy in May, new cases have spiked and unemployment remains over 20 percent, up from 3.9 percent before the pandemic.

Critics of the Netanyahu government’s response to the economic crisis say it has provided too little assistance to Israelis and has offered no safety net for hundreds of thousands of self-employed workers and business owners. The government has also been accused of issuing contradictory guidelines that have only further stoked the anger of everyday citizens.

An economic aid plan announced by Netanyahu last week, which would see hundreds of dollars handed out to every Israeli household, was widely condemned by economists and has hit a snag in parliament.

Image: An Israeli police officer puts his knee on a demonstrator to make an arrest during a protest against Israel’s Prime Minister Benjamin Netanyahu outside his residence in Jerusalem, early Wednesday, July 22, 2020. (AP Photo/Ariel Schalit)