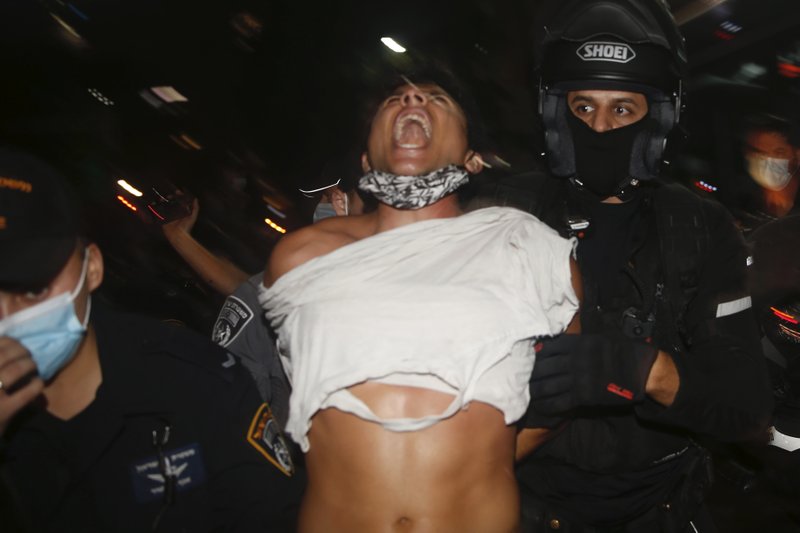 TEL AVIV, Israel (AP) — Tens of thousands of Israelis demonstrated in hundreds of locations across Israel against Prime Minister Benjamin Netanyahu, pressing ahead with their campaign against the Israeli leader on Saturday night after the government banned large, centralized demonstrations as part of a new coronavirus lockdown.

The protesters have been gathering outside Netanyahu’s official residence in Jerusalem each week for over three months, demanding his resignation. After imposing a second nationwide lockdown to halt a raging coronavirus outbreak, the government last week passed a rule allowing people to protest only within one kilometer (0.6 miles) of their home. While Netanyahu has said the restrictions are driven by safety concerns, the protesters accuse him of tightening the lockdown to muzzle their movement.

In line with the new rules, organizers said that over 1,000 protests were held across the country. In one of the largest rallies, hundreds of people gathered in Tel Aviv’s central Habima Square, blowing on horns, pounding drums and chanting anti-government slogans. “Dictatorship, sponsored by corona,” said one poster. Dozens of police officers stood behind metal barriers, and several people were arrested. Meanwhile, about 200 people gathered outside Netanyahu’s Jerusalem residence.

The protesters say Netanyahu should not serve as prime minister when he is on trial on corruption charges and accuse him of bungling the country’s coronavirus crisis, which has ravaged the economy. Many of the protesters are young Israelis who have lost their jobs.

Israeli media reported attacks on protesters in several locations, including an alleged assault that left a 57-year old woman with a bloody face in Tel Aviv.

Defense Minister Benny Gantz, Netanyahu’s rival and governing partner, called such attacks “unthinkable” and called on police to catch the perpetrators. “Protests that are held in line with health regulations are legitimate and vital to democracy,” he tweeted.

Netanyahu and Gantz formed what they called an emergency government last May after three inconclusive elections in under a year. The bitter rivals said the alliance was needed to confront the threat of the coronavirus. But since then, the government has been paralyzed by infighting.

On Friday, Tourism Minister Asaf Zamir of Gantz’s Blue and White party resigned over the failure to contain the outbreak, adding more uncertainty about the future of the government.

Zamir, who remains in parliament, told Channel 13 TV Saturday night that the country is in a huge health and economic crisis, but Netanyahu bungled the response because he was preoccupied with the demonstrations. “The next one who leaves should be Netanyahu,” he said.

Israel now reports over 7,000 infections a day and the nation of 9 million people has more than 250,000 confirmed cases and over 1,600 deaths. Israel’s outbreak is among the worst in the world on a per capita basis.

Israel garnered praise last spring when it moved quickly to seal its borders, closed many businesses and imposed strict stay-at-home orders. But in May, authorities abruptly reopened the economy and lifted nearly all restrictions. Case numbers have soared since then.