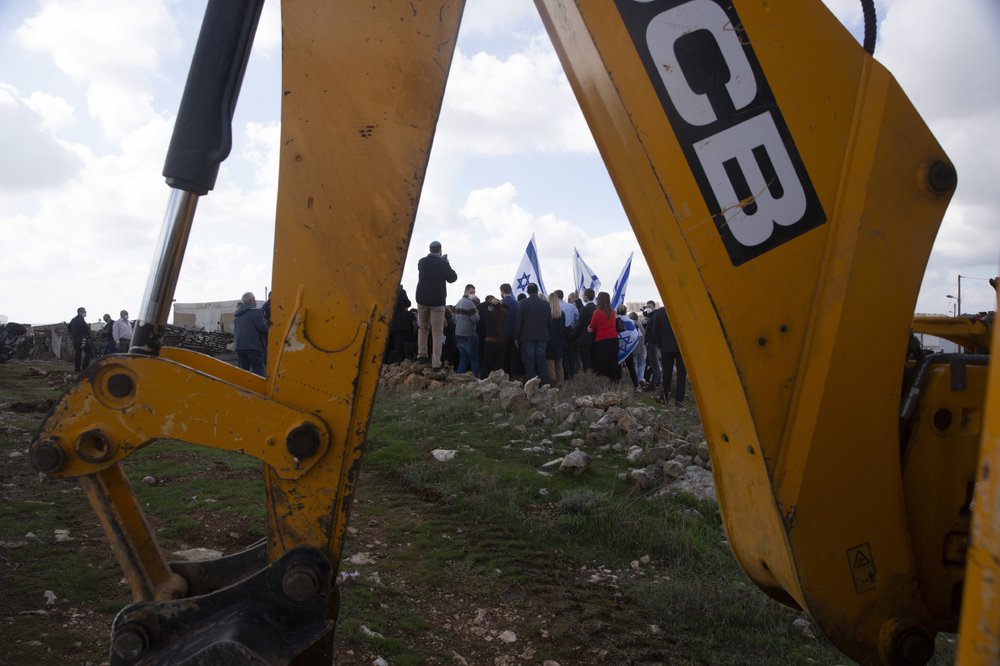 JERUSALEM (AP) — Israeli protesters shouted down a group of European diplomats on Monday who were visiting the site of a planned settlement expansion in east Jerusalem that would make it even harder to establish a viable Palestinian state and could anger the incoming US administration.

The diplomats went to Givat Hamatos, in east Jerusalem, to voice their opposition a day after Israeli authorities announced tenders for more than 1,200 new homes. The new construction would further sever east Jerusalem from the nearby Palestinian town of Bethlehem and the southern West Bank.

They were met by around 50 right-wing protesters who waved Israeli flags and chanted “EU, shame on you!” The protesters chanted so loudly that members of the delegation were unable to deliver public statements and had to relocate to another part of the city.

Sven Kühn von Burgsdorf, the EU representative to the Palestinian territories, said the planned settlement expansion “gives some observers the impression” that Israel is trying to create “facts on the ground” before President-elect Joe Biden assumes office in January.

“It’s very important to demonstrate unity in the international community that any such project, any such construction, which is illegal under international law, cannot go forward,” he said.

Israel has long dismissed international criticism of settlement activity, but the decision to move ahead with construction at Givat Hamatos could strain ties with Biden, who is opposed to settlement expansion and hopes to revive negotiations on a two-state solution.

President Donald Trump has given unprecedented support to Israel, including by abandoning the decades-old US position that settlements are illegitimate. US Secretary of State Mike Pompeo plans to visit a Jewish settlement in the occupied West Bank later this week in a stunning departure from his predecessors, who often spoke out against settlement construction.

Earlier on Monday, the UN’s Mideast envoy said he was “very concerned” by Israel’s decision to advance construction in Givat Hamatos.

“It would significantly damage prospects for a future contiguous Palestinian State and for achieving a negotiated two-state solution based on the 1967 lines, with Jerusalem as the capital of both states,” Nickolay Mladenov, the UN envoy to the Middle East peace process, said in a statement.

“Settlement construction is illegal under international law and I call on the authorities to reverse this step.”

Peace Now, an Israeli anti-settlement group that closely tracks settlement activity, said Sunday’s move allows contractors to begin bidding on the tenders, a process that will conclude just days before Biden’s January 20 inauguration. Construction could then begin within months.

“The construction here may bury the chances for peace,” said Hagit Ofran, an expert on the settlements at Peace Now who accompanied the EU delegation. “We are here to protest and call for all the world to stop it, because it’s not only for Israel, it’s for the whole world.”

By MOSHE EDRI and JOSEPH KRAUSS

Image: Protesters carrying Israeli flags heckle a news conference by European Union officials visiting the construction site for Givat Hamatos settlement in East Jerusalem, Monday, November 16, 2020. The Israel Land Authority announced on its website Sunday that it had opened up tenders for more than 1,200 new homes in the settlement of Givat Hamatos, according to the Israeli anti-settlement group Peace Now. (AP Photo/Maya Alleruzzo)