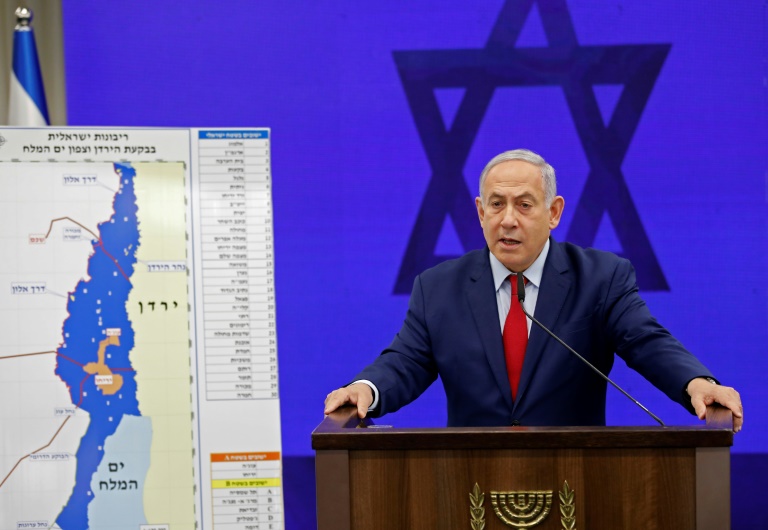 Netanyahu said in a televised speech he would move to annex the strategic valley, which accounts for around a third of the occupied West Bank, if he wins the vote.

He also reiterated his intention to annex Israeli settlements in the wider West Bank, but in coordination with US President Donald Trump, whose long-awaited peace plan is expected to be unveiled after the election.

Taken together, those moves could essentially destroy any remaining hopes for a two-state solution to the Israeli-Palestinian conflict.

“They would be devastating to the potential of reviving negotiations and regional peace, while severely undermining the viability of the two-State solution.”

An EU statement echoed the UN objection, adding that the plan was a threat to “the prospects for a lasting peace”.

Palestinian leaders said Netanyahu was destroying any hopes for peace, while senior official Hanan Ashrawi said the plans were “worse than apartheid”.

Netanyahu’s main opponents in the election, the centrist Blue and White alliance, along with others called the announcement an obvious attempt to win right-wing nationalist votes, which will be key for the premier’s Likud party.

Blue and White leader Benny Gantz has previously spoken of the Jordan Valley remaining under Israeli control forever, but he called Netanyahu’s announcement an “empty declaration” that would amount to nothing.

Politicians from smaller parties on the far-right who are competing with Netanyahu for votes called it too little and too late.

“Why talk about annexation one week before the elections when the government can decide to apply it when it wants, and even today?” asked Transport Minister Bezalel Smotrich, part of the far-right Yamina alliance in the upcoming vote.

However the Yesha Council, an umbrella organisation for Israeli settlements in the West Bank, said it was an “historic event”.

Netanyahu’s announcement was only the start of a tense evening.

Later Tuesday night, Netanyahu was hustled off stage at a campaign rally when sirens warning of incoming rockets blared in the southern city of Ashdod.

Both rockets fired from Gaza were shot down by Israel’s Iron Dome air defence system, and Netanyahu later returned to the stage after the all-clear, saying Hamas was scared of him winning the election.

On Wednesday, three more rockets were fired toward Israel from Gaza, the army said, and an Israeli tank retaliated by striking two Hamas posts.

There were no reports of casualties.

Recent days have also seen a controversial push by Netanyahu to pass legislation that would allow party officials to bring cameras into polling places during the election.

The legislation drew outrage from opposition parties, and critics labelled a clear attempt to depress turnout among the Arab population as it could intimidate many into staying away.

A vote on the bill failed in parliament on Wednesday, but before that the head of the mainly Arab Joint List alliance, Ayman Odeh, approached Netanyahu and stuck his phone in front his face to film him. Odeh was removed from the chamber.

The Jordan Valley accounts for around one-third of the West Bank and Israeli right-wing politicians have long viewed the strategic area as a part of the territory they would never retreat from, seeing it as the country’s eastern border.

Israeli settlements are located in what is known as Area C of the West Bank, which accounts for some 60 percent of the territory, including the vast majority of the Jordan Valley.

Netanyahu said his annexation plans would not include Palestinian cities, such as the Jordan Valley’s Jericho, though it would be encircled by Israeli territory.

Israel occupied the West Bank in the Six-Day War of 1967 in a move never recognised by the international community.

Its settlements there are considered illegal under international law and major stumbling blocks to peace as they are built on land the Palestinian see as part of their future state.

Israel says the Jordan Valley is vital to its security.