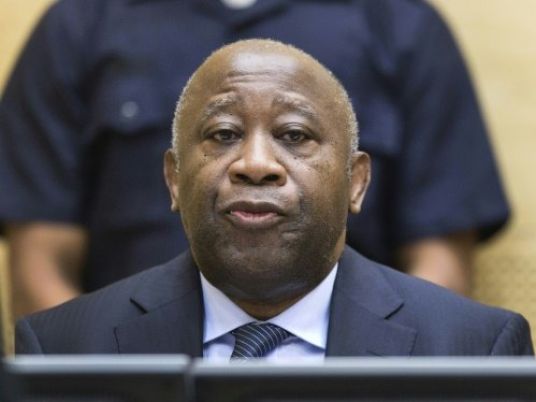 Former Ivory Coast president Laurent Gbagbo Thursday becomes the first ex-head of state to stand trial at the world's only permanent war crimes court, five years after triggering political unrest that left 3,000 dead.
Gbagbo's highly anticipated appearance in the dock at the International Criminal Court (ICC) is the culmination of the upheaval that wracked the west African nation when he refused to stand down after losing elections in November 2010 to bitter rival Alassane Ouattara.
The political standoff triggered an international crisis, with the European Union, the United States and former colonial power France all recognizing Ouattara as the winner.
Weeks of tensions dragged into a bloody five-month stalemate with Gbagbo holed up in the fortress-like presidential palace, until he was eventually arrested by Ouattara's troops aided by UN and French forces.
Gbagbo's notorious wife, known as "the Iron Lady", was sentenced to 20 years' jail last year at a trial in Abidjan for her role in the events.
Alongside his former ally, Charles Ble Goude, Gbagbo, 70, now faces four charges of crimes against humanity, accused of devising and implementing a plan to extend his 10-year rule through a brutal campaign of murders and rapes.
Both men will be asked how they plead at the start of their joint trial Thursday in the new ICC premises nestled in the sand dunes of the Dutch city of The Hague.
Deliberate campaign
Prosecutors allege that with the police and army as well as young supporters formed into a militia dubbed the "Young Patriots", Gbagbo and members of his inner circle such as Ble Goude fought to stay in power.
Those killed or injured were "victims of attacks by public forces or organized groups, acting under the control of a certain hierarchy," Richard Nsanzabaganwa, from the ICC prosecutor's office, told AFP.
"These were not improvised attacks."
But the defense denies there was an organized plan and insists Gbagbo was a champion of democracy in his nation — the world's top cocoa producer and a regional powerhouse once held up as a beacon of democracy.
Gbagbo and his supporters — about 1,500 of whom plan to protest outside the modern glass-fronted ICC building — in turn accused Paris of plotting to oust him and charged Ouattara's camp with retributions dubbed "victor's justice".
Since being transferred to The Hague in 2011, Gbagbo has vowed to unveil the truth behind the 2010-2011 events.
Lawyers for Ble Goude told AFP he would plead "not guilty" as he was "determined to establish the truth about all the charges levelled against him."
"Quite simply the facts show that Charles Ble Goude is not a criminal as they would have us believe," said his lawyer Claver N'Dry.
After years of delays partly due to Gbagbo's claims of ill-health, human rights lawyers say the trial will provide "redress that is long overdue, and shed light on the power structure that led to mass abuses during the post-election crisis."
"Pro-Gbagbo forces wreaked havoc in Cote d'Ivoire, committing unspeakable abuses including gang rapes, torture, and murder," added Param-Preet Singh, senior counsel at Human Rights Watch.
Wife in jail
During a trial likely to last three to four years, prosecutors intend to present 5,300 elements of proof including videos, as well as 138 potential witnesses.
The charges focus on four events, including an attack on December 2010 on Ouattara supporters when 33 people were killed during a march to an Ivorian television station.
Another incident was the shelling of the Abobo market quarter in March 2011 in northern Abidjan, in which 40 people died.
The hearing will start at 9:30 am (0830 GMT), and after the pleas ICC prosecutor Fatou Bensouda will lay out the case, followed by representatives of 726 victims, and then the defense lawyers.
Gbagbo's wife Simone is also wanted for crimes against humanity by the ICC, but the government refuses to hand her over.
Another 78 people have also been brought before Ivorian courts.
In October, Ouattara was re-elected in a landslide victory with almost 84 percent of the vote in the nation's first peaceful vote in more than a decade.