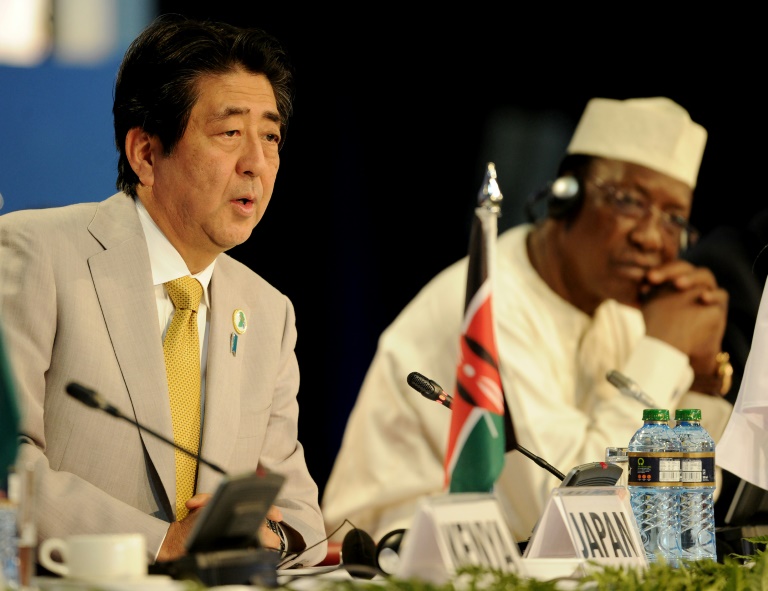 Japan hosts development talks with African leaders this week, looking to boost its presence on the continent and offer an alternative to investments by an increasingly assertive China.

Japanese Prime Minister Shinzo Abe has said he wants the latest round of the Tokyo International Conference on African Development (TICAD) to help “launch impactful Japanese action” on the continent.

And the meeting, held around every five years since 1993 in Japan or an African country, comes against the backdrop of expanding investment in China, which announced $60 billion in development funding for Africa last year.

That figure is twice as much as Japan pledged at the last TICAD meeting in 2016.

But analysts said Tokyo is unlikely to try to out-pledge China at this year’s talks, which start on Wednesday and run until Friday.

It will seek instead to position itself as a partner of “quality”, offering high-impact loans and other assistance without the sometimes-controversial strings attached to money doled out by Beijing.

TICAD is a good opportunity for Japan to send a message about “its practical, well-planned lending”, said Sawaka Takazaki, deputy director of the Middle East and Africa division at the Japan External Trade Organization (JETRO), a government-backed trade-promotion body.

China’s massive Belt and Road Initiative, which offers hundreds of billions of dollars in Chinese financing for massive infrastructure projects, has been eagerly embraced in many parts of Africa.

But on the continent as well as elsewhere, it has been criticized for favoring Chinese companies and workers over local economies, saddling nations with debt, and ignoring rights and environmental issues.

Many of the infrastructure projects in Africa “could become quite a significant debt burden for some countries”, said Masahiko Kiya, a Japanese diplomat in charge of the conference.

Among the loans Tokyo is expected to announce is 400 billion yen ($3.8 billion) in funding for developing renewable energy projects, the Nikkei daily reported earlier this month.

The money could fund projects including an expansion of wind-power generation facilities in Egypt and construction of geothermal power units in Kenya and Djibouti, the business newspaper said.

Separately, the Japanese government and African Development Bank will jointly announce plans to offer more than 300 billion yen in loans for “quality and transparent” infrastructure development, the newspaper reported.

On the ground in African countries, Japan is seen as practising a “quiet and ‘uninvolved’ diplomacy”, Mohamed Diatta, a researcher with the Institute for Security Studies in Ethiopia, told AFP.

“Japan is a development partner, less intrusive than the likes of China or Russia,” added Diatta.

“It does not have an overbearing presence.”

Catching up to do

But while Japan can boast a positive image and a longstanding development role, it has catching up to do, said Christopher Kayumba, a Rwandan political commentator.

“Japan has been contributing to Rwanda’s social-economic development for a long time,” he told AFP.

“It is however not in the leagues of China, USA, UK or the EU when it comes to how influential they are in Rwanda.”

That was far below China’s $43 billion, according to JETRO data.

And while Japan’s exports to Africa last year were down more than 27 percent from their 2008 levels, China has seen a nearly 50-percent surge in exports to the continent in the past decade, JETRO said.

Leaders including Egyptian President Abdel Fattah al-Sisi and South African President Cyril Ramaphosa will be at the conference, and more than 150 Japanese firms will take part in an expo on the sidelines, hoping to drum up business.

“I can’t help but say Japan’s business in Africa is in low gear,” said Nobuhiko Sasaki, chairman at JETRO.

“It’s been said that Africa is the last frontier,” he added.

“Can Japan steadily do business in Africa and win the fruits of growth? Japan and Japanese companies are facing a real test.”

Image: AFP/File / TONY KARUMBA China’s development funding for Africa last year was $60 billion — twice as much as Japan pledged at the last TICAD meeting in 2016