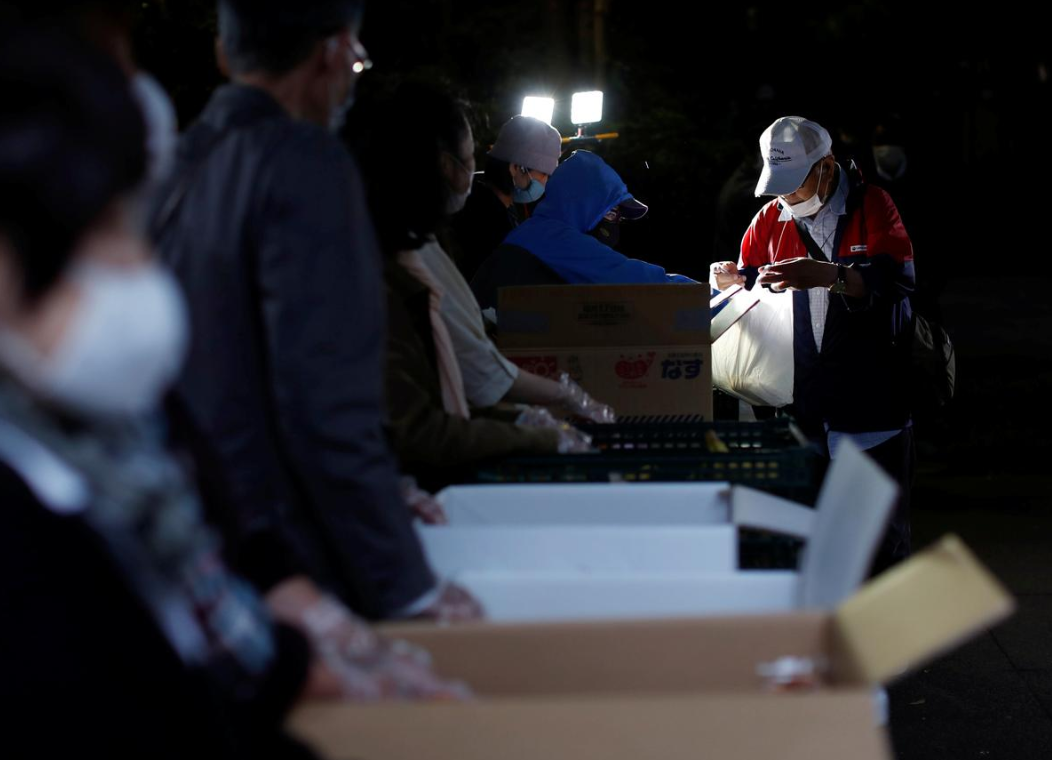 TOKYO (Reuters) — On a recent Saturday in Tokyo’s Shinjuku district more than 100 people, many of them elderly men, stood close together in a long queue waiting for food hand-outs.

One of them, Tomoaki Kobayashi, said he was fearing the day he would lose his home as his pension alone was not enough to pay the rent. Still spry, the 72-year-old said he lost his job cleaning pachinko parlors after many of the gambling halls were shut in a state of emergency imposed because of the coronavirus.

“This is the final month. I can’t pay any longer,” Kobayashi said of his rent, clutching a small sack of groceries — snacks, instant curry and hashed-beef rice that would feed him for the next few days. He said he had paid pension premiums for just 15 years, unlike the 33 years for most pensioners, meaning he is eligible for only 54,000 yen (US$500) every two months.

In a country with the world’s oldest population and lingering unease about immigration, elderly workers fill roles as shop clerks, cleaners and taxi drivers. For some, the work provides an additional boost to a pension and considerable savings. But for lower-income workers like Kobayashi, part-time jobs are a lifeline.

Now, the coronavirus has shuttered shops and offices and left some of the most vulnerable members of the labor force untethered, even as they are more at risk from the disease than other age groups.

“Elderly who have to work because of low pensions are facing tough conditions,” said Takanori Fujita, who co-heads a network of non-profit workers, lawyers and academics tackling social issues caused by the outbreak.

“We’re holding consultations [with elderly] no longer able to pay their rent or electricity bills,” he said.

About 13 percent of the labor force are aged 65 or older, up from nine percent when Abe returned to power in 2012, according to government data. More than three-quarters of elderly workers are non-regular employees, part-timers and contract workers who are the first to lose their jobs when business is under pressure.

Hard to start over

“I think it’s hard for them to start working again if they lose their job once,” said Taro Saito, an executive research fellow at NLI Research Institute.

The jobless rate hit a one-year high of 2.5 percent in March, a rate that is the envy of many nations. Still, an increase would further dampen demand and more elderly out of work could put greater strain on social services as Japan braces for its worst postwar economic slump.

“Japan isn’t a country like the United States where the unemployment rate rises and falls greatly,” said Saito. “The negative impact is big even if it rises by just one percent.”

Nearly a fifth of elderly Japanese live in relative poverty, meaning their income is less than half of the national median household income. The average for over 65 across the Organization for Economic Cooperation and Development is just shy of 14 percent.

Single-person households that consisted of unemployed people aged 60 and over in 2018 had on average about 123,000 yen in real income per month, coming mostly from pensions. Compared to their expenses, those households had a shortfall of about 38,000 yen a month, government data shows.

Tsuyoshi Gonda, 60, applied for unemployment benefits after he was laid off from his full-time job as a hairdresser in Tokyo’s Katsushika area in mid-April.

That was not long after Abe called for the state of emergency because of the coronavirus, urging people to avoid crowds and prompting many businesses to shut.

“The number of customers dropped to zero a day after the emergency was in place,” Gonda said. “It was a shop where people decided to come on the day. It was very harsh.”

Image: An elderly man receives food aid handouts for the needy, as the spread of the coronavirus disease (COVID-19) continues in Tokyo, Japan, May 9, 2020. (REUTERS/Issei Kato)

Many Japanese defy appeals to stay home to curb virus