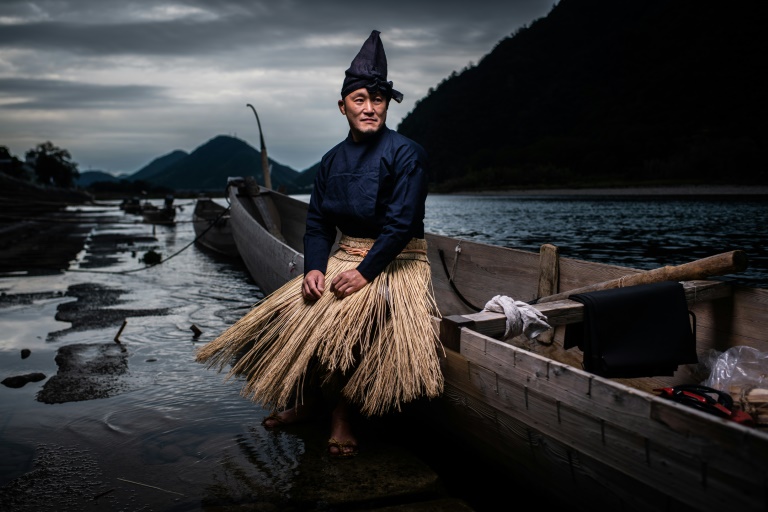 In the pitch black night, fires burn alongside a river in Japan’s Gifu as a handful of men prepare for a ritual that dates back over 1,300 years: fishing with cormorants.

Dressed in traditional clothes, they look like they come from another time. They wield their cormorants, tied together with strings, like puppeteers.

Their profession, known as “ukai,” was once common in waterside villages and towns throughout Japan and other parts of the world.

But it has been on the gradual decline for centuries, and now lives on in Japan as a tourist attraction and a carefully protected part of the country’s national heritage.

At 46, Shuji Sugiyama is the youngest of the “usho” in Gifu, in western Japan. And he is one of just nine people to hold an imperial license for the practice.

He sits quietly on a rock by the inky water of the Nagara River, apparently undisturbed by the chatter of his fellow fishermen.

“It’s because we live together, the man and the cormorants, that ukai fishing is possible,” he told AFP.

“For example, I could never fish with another master’s cormorants,” he added, feeling the throats of his birds as he prepares for the night’s expedition.

Centuries ago, the profession flourished, but by the time the palace began issuing imperial licenses to usho in 1890, the art was already on the decline.

Now there are only a few dozen usho throughout Japan, and just nine of them hold imperial licenses, turning over eight catches a year to the palace and receiving a symbolic salary of 8,000 yen ($71) a month.

The method is hardly a commercial enterprise, and the usho rely on subsidies from local authorities that have turned the profession into a tourist draw and hope to one day see ukai make the UNESCO World Heritage list.

Sugiyama inherited the job from his father, fishing alongside him until he obtained official usho status in 2002.

Five generations of his family have practiced the unusual fishing technique, which once existed in Europe and elsewhere but now continues mostly in Japan and China.

The job requires a tolerance for unusual hours — fishing takes place after sundown, with the usho using flaming lamps hung on their boats to attract fish below the surface.

And while the fishing season only runs from May until October, each fisherman’s cormorants require daily care all year round.

New birds arrive each autumn, after being captured during their migration across Ibaraki province north of Tokyo, and must be trained — a process that takes around three years.

“I usually take about 10 birds fishing, and I integrate the new ones with the group so they will imitate the older ones and learn how to fish,” Sugiyama said.

– Hopes for the future –

The evening’s fishing begins with assistants marching through the alleys near the riverbanks, carrying the cormorants in bamboo cages to their masters.

The fishermen wear traditional outfits: a blue shirt and matching bulbous hat said to protect against the ashes of the lamps, long straw skirts to keep out water and cold, and truncated sandals that leave the heels exposed to prevent slipping.

Flaming torches are hung on the boats to attract the small trout known as “ayu”, and a draw determines the order the boats will move out in.

The cormorants are tied together with ropes, and the fishermen tie string around each bird’s throat to prevent them from eating the catch.

The loops leave the birds enough space to eat smaller fish, and are removed when the night’s catch is complete.

The birds are expert fishers and instantly kill their prey with their razor sharp beaks.

When one surfaces with a fish, his usho pries it from the bird’s gullet, then sends it back into the water.

At the peak of the catch, the air is full with the sound of squawking birds, shouting fisherman and the rhythmic tapping produced by boatmen banging sticks on the sides of the vessel.

Tourists on separate boats float around the fishermen, snapping photos.

At the end of the season, Sugiyama will be able to relax a little, but he doesn’t expect to take a holiday anytime soon.

“I have a son who is still in primary school. I have the feeling that he has started to be interested in my work,” he said.

“He sees me every day with the cormorants, and I hope that one day he’ll take my place.”

Women wrestlers take on rivals and tradition in south Iraq

Cinema club for people with special needs opens in Egypt