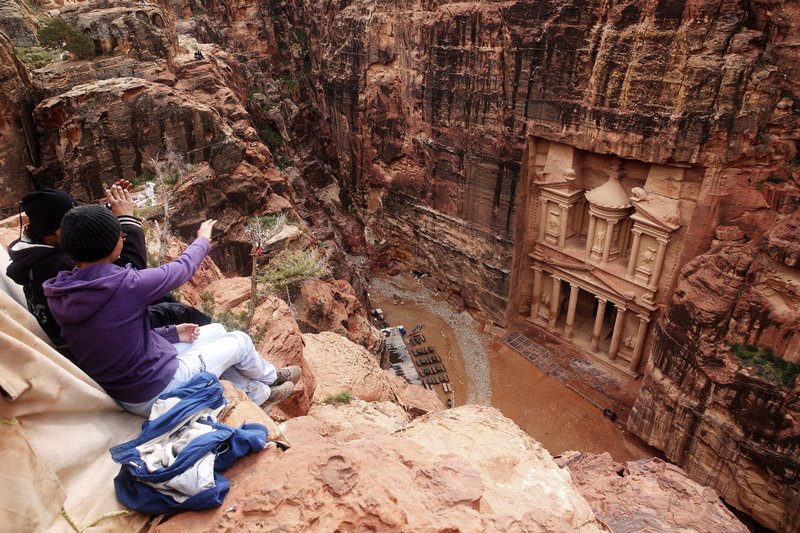 RAMALLAH, West Bank (AP) — A fictional caper about an antiquities heist set in an ancient Jordanian city has stirred widespread outrage over the film’s portrayal of historical Jewish ties to Jordan, shining a light on the tenuous peace with neighboring Israel and prompting the government to suspend the movie’s production.

Based on a book of the same name, the movie, “Jaber,” follows a Jordanian boy who uncovers a stone in the rose-colored, rock-hewn city of Petra with a Hebrew inscription on it. He sets off to sell it to the highest bidder, but interested parties in Israel catch wind of the find, dispatching a Russian organized crime group to pursue the boy and retrieve the stone at any cost.

Opponents of the film say merely discussing a historical Jewish presence in Jordan could open the door to Israeli territorial claims to the Hashemite Kingdom. They point to Israel’s claims over the West Bank and east Jerusalem — war-won territories sought by the Palestinians — which Israel says are rooted in millennia-old Jewish ties, backed up by archaeological finds.

While such a scenario is unlikely in Jordan, the concerns reflect the hostility Jordanians feel toward Israel despite the two countries’ 1994 peace agreement.

“Any talk about Jewish history in Jordan could lead to political claims,” said Ali Elayan, who was slated to play a Jordanian police officer in the movie but withdrew over his opposition to the plot. “That is what happened in Palestine.”

Israel captured the West Bank and east Jerusalem, then under Jordanian control, in the 1967 Mideast war. Spurred on by religious Jews hoping to restore a Jewish presence in the biblical land of Israel, repeated Israeli governments have erected settlements in the territories that are widely seen as obstacles to the establishment of a viable Palestinian state. The Palestinians seek the West Bank for their future state, along with east Jerusalem and the Gaza Strip.

Since signing the landmark peace accord, Israel and Jordan have developed low-key yet strategic ties on energy, water and security. But the relationship has been tested in recent years. Last year, Jordan’s King Abdullah II decided not to renew parts of the peace deal regarding access to farming land. And two years ago, a diplomatic crisis was sparked when a guard at the Israeli Embassy in Amman opened fire after he said he was attacked with a screw driver, killing two Jordanians. Israel swapped out its ambassador to the kingdom and expressed “deep regret” over the incident. The guard, who claimed self-defense, received a hero’s welcome in Israel, infuriating the Jordanians.

Israel’s Foreign Ministry declined to comment on the controversy surrounding the film.

While there is ample archaeological evidence of a Jewish presence in Jordan, only an extreme-right fringe of Israeli society seeks both banks of the Jordan River as part of Israel. An overwhelming majority of Israelis make no claim to Jordanian land and place high value on the peace accord.

Ordinary Jordanians — many of whom are Palestinian refugees or have ties to Palestinians — view Israel with animosity.

The movie was set to begin filming this month when actors began dropping out over the script and taking to social media to air their criticisms, sparking a public outcry. Seizing on the wave of public opinion against the movie, the government demanded that the director, Muhyiedeen Qandour, halt filming until an official commission studies the script and delivers recommendations on it. It is unclear how long that may take.

Qandour told The Associated Press that the film bears no political undertones. He rejected criticism that it invites Israeli territorial claims.

“Many civilizations passed through historical Jordan. You don’t see them now returning to claim parts of the country because they were here once in the past,” he said. “The argument made by some about the movie is simply naive and even childish.”

But opponents are still skeptical.

“We are not against Jews as Jews but we are against Israel as an occupying power which uses religion to take others’ land,” said Sari al-Asaad, the former head of the Jordanian Actors Association, who opposed the movie and lobbied to derail it.

Israeli nationalists have pointed to biblical history and archaeological discoveries to back up their claim to the West Bank, a territory Israel views as “disputed” and whose fate should be determined in peace talks. The Palestinians have accused Israel of exploiting the Bible and ignoring other religions’ ties to the region to grab land. Israel in turn accuses the Palestinians of denying a Jewish connection to the region to strengthen its own claim.

Fears sparked by the film were stoked earlier this month when video emerged of Jewish visitors praying in a shrine said to be the burial place of Moses’ brother Aaron, located near Petra. Jordan shuttered the site upon discovery of the videos and ordered an investigation into the incident, according to the official Jordanian news agency Petra.

Clashes between Muslim worshippers and Israeli police at a key Jerusalem shrine holy to Muslims and Jews over the weekend have only bolstered critics of the film. The east Jerusalem holy site, known to Jews as the Temple Mount and to Muslims as the Noble Sanctuary, is administered by an Islamic trust under Jordanian stewardship.

“The government and the people in Jordan are unhappy with the relationship with Israel on a number of levels,” said Daoud Kuttab, an Amman-based analyst. “Usually Jordanian officials try to defuse the tension, but this time they didn’t.”

FILE – In this Feb. 13, 2017 file photo, tourists point at the Treasury, in the kingdom’s Petra archaeological park, southern Jordan. A fictional caper about an antiquities heist set Petra has stirred widespread outrage over the film’s portrayal of historical Jewish ties to Jordan, shining a light on the tenuous peace with neighboring Israel and prompting the government to suspend the movie’s production. “Jaber” follows a Jordanian boy who uncovers a stone with a Hebrew inscription on it in the rose-colored, rock-hewn city of Petra. (AP Photo/Sam McNeil, File)

U.S. economic plan decried by Palestinians but gets cautious nod in Gulf