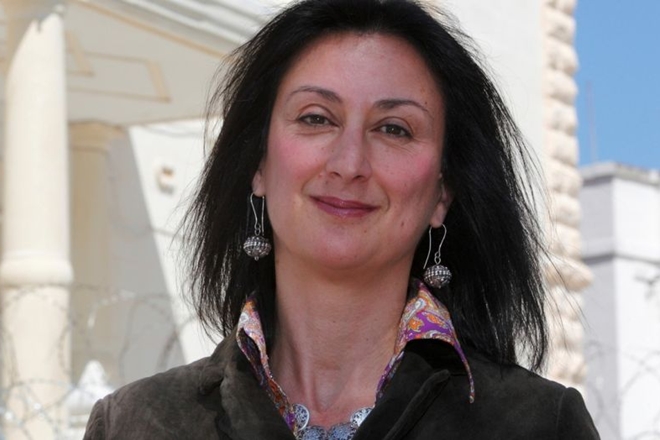 A year after a car bomb killed Maltese anti-corruption journalist Daphne Caruana Galizia, those who ordered the murder remain free while others continuing her work in the EU’s smallest state are branded traitors.

The windswept field where the mother-of-three’s burnt-out car ended up on October 16, 2017, has become a monument to her life.

Supporters of free speech like Tania Attard come to this isolated spot to place flowers under a banner calling for justice, fluttering alongside a Maltese flag.

“If the person responsible for this is established, perhaps then we can rest and see that justice is done,” Attard told AFP.

“I’m sure they never realized that it would come this far, that it would… turn into something so important and international.”

After her death an international consortium of journalists launched the Daphne Project, coordinated by Forbidden Stories, a Paris-based organization dedicated to continuing the work of killed or imprisoned journalists.

“They just thought they would eliminate her and then feel better but I don’t think that is the result at all, I think that it has backfired on them,” said Attard.

But while journalists abroad can continue her work, those in Malta calling for justice say they are branded traitors.

Caruana Galizia’s blog sought to expose scandals on the island of less than half-a-million people, from petrol smuggling to money laundering, offshore bank accounts to nepotism, implicating members of the government and organized crime.

Journalist and blogger Manuel Delia says that he receives threats and insults in the street because of his work, including speaking to foreign journalists, just as Caruana Galizia did when she was alive.

“The more time passes the more we realize that democracy doesn’t really work well here, the rule of law does not prevail,” said Delia, who worked for years for the Nationalist party until it lost to Labour in 2013.

Supporters of Caruana Galizia hold a vigil on the 16th of every month, demanding justice. Meanwhile, officials regularly dispatch street cleaners to remove an impromptu memorial that keeps reappearing in Valletta’s historic center.

Despite repeated requests to the office of Labour Prime Minister Joseph Muscat and to the government for official comment ahead of the anniversary, none was forthcoming.

An official from Muscat’s office briefly blocked an AFP journalist on Twitter for asking for comment, then invited questions via email which were never answered.​

Three men who allegedly carried out the car bombing have been arrested and are facing trial, but whoever ordered the killing remains free.

The political opposition to the Labour government consists of the Nationalist party, which was headed by Simon Busuttil until June last year.

He says that Caruana Galizia’s corruption investigations and accusations crossed party lines, although she more regularly skewered members of the Labour party.

He says Brussels should ensure the rule of law is applied in the island, which joined the European Union in 2004.

The murdered journalist’s sister Corinne says that the current criminal investigation is limited in scope, and that there should be an independent inquiry.

“One person was killed, nobody has been punished, nothing has changed. If it was dangerous for Daphne, think how much worse it is now.”