In his book ‘Lessan Al-Arab’ (“The Arabic Language”), linguist Ibn Manzour el-Afriqi provides a precise definition of the post-Ramadan Eid al-Fitr feast. “Eid is a festival of joy,” he quotes fellow writer Ibn Al-Arabi as saying. “And the feast following Ramadan was called Eid al-Fitr, or the breakfast feast, because on that day Muslims break their month-long fast.”
Another linguist Al-Azhari, for his part, described the holiday as “a time of joy and sorrow.”
In Egyptian culture, joy and sorrow have always been closely linked. When Egyptians laugh out of joy, for example, they will also pause to ask God to spare them from future calamities — for they do not believe that joy can last too long before fate visits something dreadful upon them.
Perhaps this can be attributed to the fact that — throughout their long history — Egyptians have always distrusted their rulers, who often begin their reigns with the best of intentions before soon turning despotic.
They have even had trust issues with the Nile River itself, the floods of which, while beneficial for agriculture, can also devastate other aspects of their lives by inundating their homes and crops. Egyptians have always believed that fate — which may smile on you in the beginning, before suddenly frowning — is merciless.
The eve of Eid al-Fitr manifests these conflicting feelings: while Egyptians are sad that Ramadan is over, they are at the same time joyous about the arrival of the feast. It is a moment of both grief and joy.
In his book, “Manners and Customs of the Modern Egyptians” (1836), Edward William Lane provides an accurate picture of these conflicting sentiments on Eid al-Fitr, or “the lesser Eid” as Egyptians used to call it.
Lane describes how people gathered on that day for morning prayers, wearing their best attire for the occasion, before visiting each other’s homes to celebrate. Servants would receive new clothing from their masters, along with tips, or baksheesh, from his guests. They would also visit former masters, giving them plates brimming with kahk (seasonal Ramadan biscuits) — a service for which they would receive handsome tips.
Traditional meals associated with the occasion included Fesiekh, or salted fish, various kinds of pie and kahk for dessert. Shops would close for the day, while everyone — proudly wearing their bright new clothes — would take to the streets and imbibe the festive atmosphere.
Lane also depicts the note of sorrow in the visits that people, especially women, paid to their dead in the graveyards. Perhaps the custom dates back to the time of the ancient Egyptians, although it is still practiced today in the Egyptian countryside.
According to Lane, they would bring palm branches and basil leaves to place over the graves. The women would distribute kahk and dates to the poor, who would go to the cemetery on that day specifically for the purpose. Sheikhs, meanwhile, would recite verses from the Koran for the dead. The men usually left the place early, while the women would stay until late afternoon.
Another such mixture of joy and sorrow was evident at the Baab al-Nasr, one of old Cairo’s four royal gates, where festivities were held only meters away from the nearby cemetery. While merrymakers dance and sing, others — only a small distance away — would sorrowfully bewail their dead 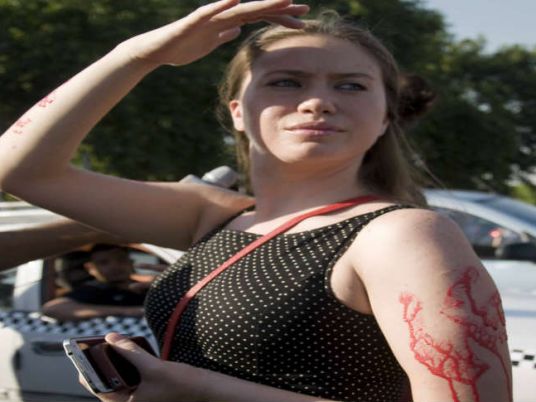