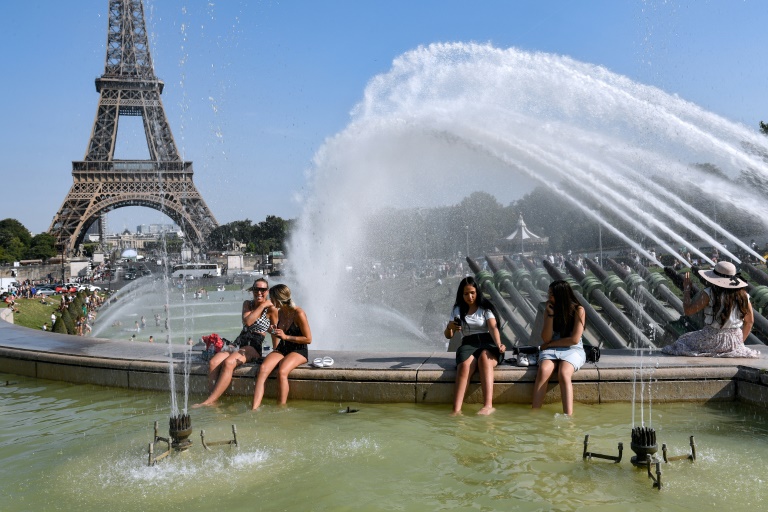 The record-shattering heatwave that baked much of northern Europe last month was likely between 1.5 to 3.0 degrees Celsius hotter due to man-made climate change, an international team of scientists said Friday.

The three-day peak saw temperature records tumble in Belgium, the Netherlands and Britain while the city of Paris experienced its hottest day ever with the mercury topping out at 42.6C (108.7 Fahrenheit) on July 25.

The ferocious heat came off the back of similar soaring temperatures in June, helping that month to be the hottest June since records began.

Scientists from the World Weather Attribution (WWA) team combined climate modelling with historical heatwave trends and compared it with monitoring data across the continent.

They concluded that the temperatures produced by the climate models were as much as 3C (5.5 degrees Farenheit) lower than those actually observed during the heatwave in Europe.

“In all locations an event like the observed would have been 1.5 to 3C cooler in an unchanged climate,” the WWA said, adding that the difference was “consistent with increased instances of morbidity and mortality.”

Global warming also made the July heatwave in some countries between 10-100 times more likely to occur, compared with computer simulations.

Such temperature extremes in northern Europe, without the additional 1C centigrade humans have added to the atmosphere since the industrial era, would be expected on average once every 1,000 years.

Michael Byrne, lecturer in Earth and Environmental Sciences at the University of St Andrews, said the analysis had “found the fingerprints of climate change all over (last month’s) extreme temperatures.”

“We know without doubt that climate change will bring increasingly severe heatwaves, but also heavier downpours and more flooding,” added Byrne, who was not involved in the research.

The July heatwave caused widespread disruption, prompting train cancellations and emergency measures in many cities. Several heat-related deaths were reported, although a precise toll is likely to take weeks to materialize.

The June heatwave itself was likely made at least five times more likely by climate change, and was around 4C hotter than an equivalent heatwave a century ago.

Europe has experienced exceptionally intense heatwaves in 2003, 2010, 2015, 2017, 2018 and two this year, peaks consistent with the general warming trend: the four hottest years on record globally were the last four years.

The World Meteorological Organization (WMO) on Friday said that preliminary data showed July may have been the hottest month ever recorded.

Temperature readings and data provided by the European Union’s Copernicus monitoring service showed that the first 29 days of July 2019 were equal to or possibly warmer than the hottest month ever, currently July 2016.

While the data needs confirming, the WMO said the figures were “particularly significant” as July 2016 occurred during a strong El Nino warming event, absent in 2019.

July also saw unprecedented melting of the Greenland ice sheet, with 12 billion tonnes of ice flowing into the sea, and wildfires in the Artic spewing out thousands of tonnes of planet-warming CO2.

“This is not science fiction. It is the reality of climate change. It is happening now and it will worsen in the future without urgent climate action,” said Taalas.

Image: AFP/File / BERTRAND GUAY The ferocious heat came off the back of a similar wave of soaring temperatures in June, helping that month to be the hottest June since records began