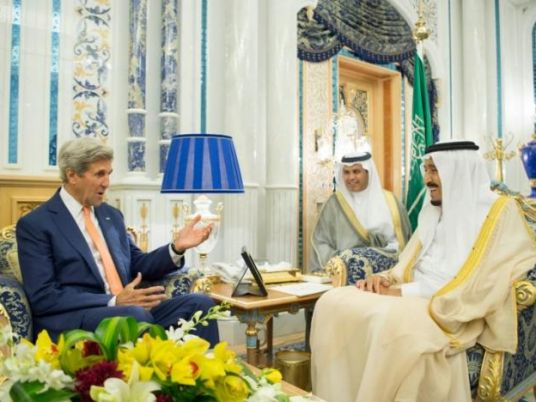 U.S. Secretary of State John Kerry said on Thursday he had agreed in talks with Gulf Arab states and the United Nations in Saudi Arabia on a plan to restart peace talks Yemen with a goal of forming a unity government.

U.N.-sponsored negotiations to end 18 months of fighting in the impoverished country on Saudi Arabia's southern border collapsed this month and the dominant Iran-allied Houthi movement there resumed shelling attacks into the kingdom.

Speaking at a press conference with his Saudi counterpart Adel al-Jubeir in the Saudi city of Jeddah, Kerry said the conflict in which the kingdom has launched thousands of air strikes in favor of the exiled government had gone on too long and needed to end.

Kerry said the Houthis must cease shelling across the border with Saudi Arabia, pull back from the capital Sanaa which they took control of two years ago, cede their weapons and enter into a unity government with their domestic foes.

Yemen's internationally recognized government, based in Saudi Arabia, has made similar demands but insisted that the Houthis fulfill all those measures before any new government was formed. However Kerry suggested they could move ahead in parallel.

"We agreed on a renewed approach to negotiations with both a security and political track simultaneously working in order to provide a comprehensive settlement," Kerry said.

"The final agreement … would include in the first phase a swift formation of a new national unity government, the withdrawal of forces from Sanaa and other areas and the transfer of all heavy weapons including ballistic missiles, from the Houthis and forces aligned to them to a third party."

The reference to handing weapons to a third party also appeared to be a departure from the government demands.

"This leaves nothing for future speculation," Kerry said. "This has a clarity to it about how confidence can be built, what the end game looks like, and how the parties get there."

Jubeir said Saudi Arabia and the United States had agreed a way forward for Yemen and said the U.N. envoy to Yemen would take it up with the parties.

Saudi Arabia, a key U.S. ally, has come under stiff criticism from rights groups for air strikes that have repeatedly killed civilians in Yemen.

The Yemen war has killed more than 6,500 people and displaced some 3 million.

The United Nations human rights office said in report on Thursday that the Saudi-led coalition was responsible for 60 percent of the 3,799 civilians killed in the war.

During his 24-hour visit to Saudi Arabia, Kerry met representatives of the Gulf Arab countries who mostly back the kingdom's war effort.

Saudi Arabia and its allies view the Houthis, who hail from a branch of Shi'ite Islam, as proxies of their archrival Iran.

The Houthis deny this and say the exiled government and the Saudis are imperialist pawns of the West bent on dominating Yemen and excluding them from power.

Jubeir denied this, saying the kingdom had "no interest, no claims in Yemen."

Kerry flew to Jeddah on Wednesday night from Nigeria. His talks with Saudi leaders and other Gulf Arab states were also due to cover possible U.S. military cooperation with Russia in Syria, a senior U.S. official said.

Backing by Gulf Arab states for the Syria plan is vital because they wield influence over Syrian opposition groups fighting to topple President Bashar al-Assad. Russia and Iran support Assad.

In his 30-minute meeting with King Salman, Kerry exchanged words with the 80-year-old monarch about his health. Speaking through a translator in the first public comments on recent surgery in the United States, he complained about his back.

"We're happy to see you in good form," Kerry said, before reporters were ushered from the room.