As vegetarian diets continue to grow in popularity around the world, more and more Egyptians are making the shift to healthy, plant-based diets.

There is increasing awareness about how saturated fats pose serious health risks and are considered a major dietary contributor to cardiovascular diseases.

Vegetarian food is not new to Egyptians. Egyptian cuisine is heavily based on vegetable dishes, most notably fuul medames and koshary, a mixture of rice, lentils and pasta that many consider the national dish.

“Authentic Egyptian cuisine has a wealth of vegetarian dishes to choose from, as we traditionally use many green, leafy vegetables — molokheya, kolkasia with salq, spinach cooked in many forms and arugula as accompaniments at meals,” says Samira Mahmoud, Egyptian Chef Association writer and chief editor.

Mahmoud adds that Egyptian cuisine also relies on many pulses, such as lentils, fava beans and black-eyed peas, which have now been shown to fulfil all protein needs when combined with rice in the same meal.

It is believed that local vegetarian food is popular among Egyptians because working-class families cannot afford the high cost of animal products due to difficult economic circumstances.

However, Mirjam van IJssel, the Egyptian Chef Association’s executive director, says there is a return to authentic Egyptian dishes with a modern, healthy twist — for example, not using ghee, or samna.

“The increase in vegetarian demand in Egypt is maybe as a result of the demand for more health-conscious consumption among the middle class and rich. There is also an increased interest in preserving Egyptian food traditions and many of those traditions are vegetarian,” IJssel says.

Besides local Egyptian food, there are a number of Asian restaurants, including Indian and Japanese, across Cairo that offer a mixed bag of vegetarian experiences. However, there is no vegetarian restaurant specializing in Egyptian cuisine, which IJseel attributes to fierce competition with Western cuisine.

“If Egyptian chefs stay close to their own cuisine, there are many options available for them to serve vegetarian fare. However, when the Western cuisine concept to have three components (protein, starch, vegetables) on a plate comes in, there seems to be a problem in rebalancing the plate or finding the main focal point of the plate, when the main protein component needs to be replaced,” IJseel explains.

This is still a challenge for chefs, she says, who often end up with a plate with only one element, such as vegetarian lasagna or another vegetarian pasta dish, or many “loose elements” that do not have harmony when combined on one plate.

“Though Asian foods are cooked in a healthy way — usually steamed or raw — it is not a given that they suit all types of body requirements. A sudden shift to a completely different health regimen could cause health disorders,” Ezzat says.

Every person should first understand the pros and cons of each diet and then follow the one that suits his or her digestive system and provides adequate nutrition, Ezzat explains.

Even though vegetarians are at lower risk of developing heart disease, diabetes, hypertension, breast cancer and obesity as a result of their low fat and high fiber intakes, Ezzat recommends they have meals comprising the five major food categories, including protein, iron, calcium, vitamin D and vitamin B12, to consume enough calories to meet energy needs.

“Our local pulses are traditionally eaten in every household with white rice. So actually, Egyptian cuisine is a great cuisine to live in when you make the choice to give up meat,” Mahmoud says. 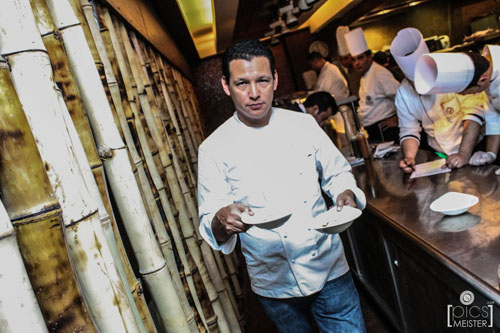