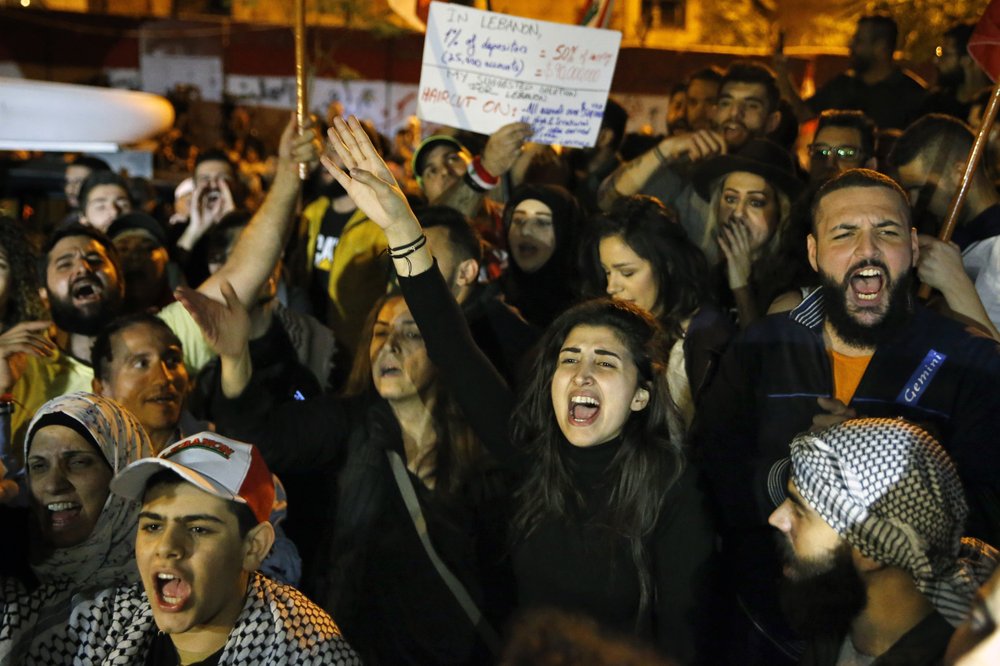 AMMAN (Reuters) — A financial crisis in Lebanon has hit the economy of neighboring Syria hard, choking off a vital source of dollars and dragging the Syrian pound to record lows.

Shut out of the global financial system by Western sanctions, Syria’s economy has depended on banking ties to Lebanon to keep business and commerce running during the country’s more than eight-year-old war.

But as Lebanese banks impose tight controls on hard currency withdrawals and transfers abroad, wealthy Syrians have found their funds inaccessible. The flow of dollars to Syria from Lebanon has all but stopped, according to three businessmen and five bankers in Damascus and abroad.

“These deposits are now trapped. You can imagine the aftershocks from this which is beginning to surface in the Syrian economy,” said a senior Lebanese banker who handles accounts of wealthy Syrians, speaking on condition of anonymity due to the sensitivity of the matter.

Lebanon’s long-brewing economic crisis is the worst since its 1975-90 civil war. The banks are seeking to prevent capital flight as dollars have become scarce and the value of the Lebanese pound has slumped on a black market.

The Syrian pound has nosedived by 30% in the weeks since Lebanon’s economic crisis escalated on Oct. 17 after a wave of anti-government protests swept the country to Syria’s west.

The Syrian pound hit an all-time low of around 765 to the dollar this week, compared to 47 before the uprising against President Bashar al-Assad began in 2011 and escalated into full-blown war with rebels and militants.

Wealthy Syrians are believed to have deposits of billions of dollars in Lebanese banks, businessmen and bankers said. Interest paid on Syrians’ deposits in Lebanon and remitted home has been an important source of dollars for the economy.

Unable to transfer dollars directly to Syria, Syrians outside the Middle East have used Lebanon’s financial system as a conduit to send funds to their relatives estimated at hundreds of millions per year. This flow has also been hit.

Syrian laborers in Lebanon are also feeling the effects of a sharp contraction in an economy that is shedding jobs fast.

“The Syrians may be even more affected by the restrictions than others,” said Kamal Hamdan, who heads the Beirut-based Consultation and Research Institute think tank.

DOLLARS IN SHORT SUPPLY IN DAMASCUS

Many middle-class Syrians lived off interest from their savings in Lebanon.

“Syrians who relied on interest on their deposits spent some of these inside Syria. There are thousands who have now stopped bringing in their dollars from Lebanon, reducing the supply of dollars,” Damascus-based Syrian businessman Khalil Touma said.

The Syrian pound was under pressure even before the Lebanese crisis set in, reflecting Syria’s deep economic problems compounded during a war that shattered swathes of the country.

With critical Russian and Iranian support, Assad has recovered control of the bulk of Syria. But much of the country is in ruins and Western states will not support reconstruction without a negotiated political transition.

In an effort to support the Syrian pound, the authorities enlisted the support of wealthy pro-Assad businessmen in October, asking them to deposit funds with the central bank, said two businessmen. But this was too little to have an impact.

Restrictions were also tightened on Syrian pound withdrawals in a bid to curb dollarization.

Syria’s central bank instructed banks to cap withdrawals at 5 million Syrian pounds per day which was later relaxed to 10 million pounds after objections, two Damascus-based bankers and one businessman said.

“These restrictions, especially after the panic over the pound, made people no longer put money in banks. Most people kept it in cash for fear they cannot withdraw it when they want. This further pushed the dollar higher,” Touma said.

But these efforts have been in vain.

“We fear that this time the fall is irreversible,” another prominent businessmen told Reuters.

“Traders are no longer putting their pounds in banks. They are turning them into dollars and this has created even more demand for the dollar,” Karim Halawani, a trader, said by phone from Damascus.

Many Syrians now hoard the foreign currency they have.

“People got scared even more, saying if these powerful businessmen were not able to do anything then the situation is deteriorating,” the food importer said.