BEIRUT, Oct 8 (Reuters) – Lebanon’s central bank denied on Friday a Swiss newspaper report that alleged the International Monetary Fund had removed information from a 2016 report on the country at the request of its governor, Riad Salameh.

Switzerland’s Le Temps said in a report on Thursday that in 2016, as Lebanon was headed towards financial ruin, 14 pages containing vital information were removed from an IMF assessment through the intervention of Salameh.

Reuters could not independently verify the report.

Salameh did not respond to a request from Reuters for comment.

The IMF did not immediately respond to a Reuters request for comment.

“This article and everything that was mentioned in it has nothing to do with the truth,” the Lebanese central bank said in a statement.

“What was reported in Le Temps newspaper makes clear the article is not serious as it says the governor of the central bank of Lebanon personally omitted 14 pages from a report of an international and respectable organisation like the IMF.”

Lebanon is suffering what the World Bank has described as one of the deepest depressions in modern history. Its economic meltdown has thrown three-quarters of the population into poverty and the Lebanese pound currency has lost 90% of its value in the past two years.

The financial system collapsed in 2019 following decades of corruption and waste in the state and the unsustainable way it was financed.

Lebanon’s woes were aggravated by political deadlock which lasted for over a year, with bickering politicians unable to form a government.

Prime Minister Najib Mikati’s cabinet, formed this September, has said it will resume negotiations with the IMF for a funding programme and technical talks are expected to begin soon. 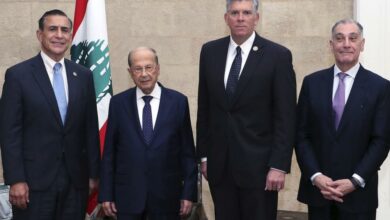 US congressmen in Lebanon over crippling economic crisis