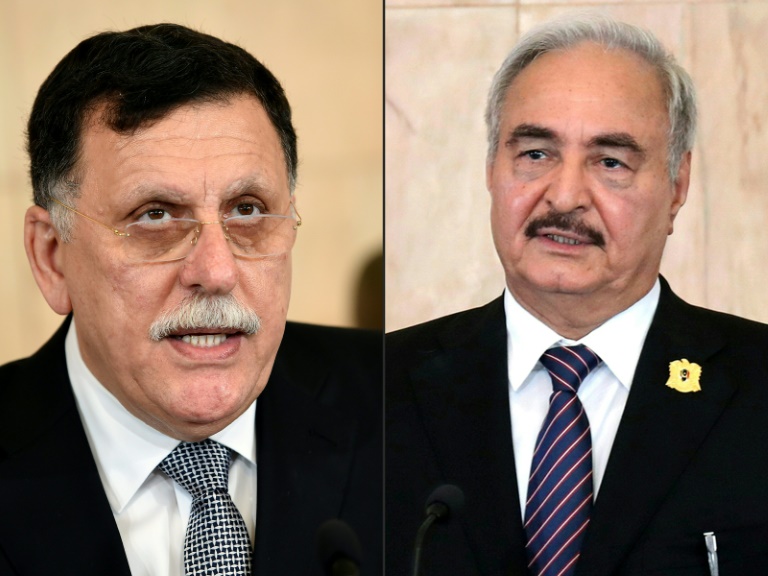 The heads of Libya’s warring sides were to meet in Moscow on Monday to sign a ceasefire deal ending nine months of heavy fighting.

The meeting follows a diplomatic push by Turkey and Russia, which is keen to bolster its status as a powerbroker in the Middle East and step into a diplomatic void left by what observers see as a partial US retreat.

The two sides are expected to sign an agreement on the terms of a ceasefire that took effect over the weekend, raising hopes of an end to the fighting that has wracked the oil-rich North African country since a 2011 NATO-backed uprising killed longtime dictator Moamer Kadhafi.

The UN-recognised Government of National Accord (GNA) in Tripoli, headed by Fayez al-Sarraj, has been under attack since last April from forces loyal to strongman Khalifa Haftar, who is based in the east of the country.

Haftar and Sarraj were to meet in Moscow for talks along with “representatives of other Libyan sides”, the Russian foreign ministry said, with Turkey and Russia’s foreign and defence ministers acting as mediators.

Russian news agencies reported representatives of the two sides had arrived for talks, but it was unclear if Haftar and Sarraj would meet face-to-face.

The ceasefire initiative was launched by President Vladimir Putin and Turkish counterpart Recep Tayyip Erdogan, who jointly called for a truce in Istanbul last week.

German Chancellor Angela Merkel visited Putin on Saturday and he supported her drive to hold a peace conference sponsored by the United Nations. Berlin said Monday the summit was planned for later this month.

French President Emmanuel Macron on Monday called for a “credible, lasting and verifiable” truce while Italian Prime Minister Giuseppe Conte was due in Turkey to discuss the situation with Erdogan.

The GNA has signed agreements with Ankara assigning Turkey rights over a vast area of the eastern Mediterranean, in a deal denounced by France, Greece, Egypt and Cyprus.

‘Turn page on past’

Sarraj on Monday called on Libyans to “turn the page on the past, reject discord and to close ranks to move towards stability and peace”.

His comments came after a ceasefire began at midnight on Sunday (2200 GMT on Saturday) in line with Putin and Erdogan’s joint call.

Since the start of the offensive against Tripoli, more than 280 civilians and about 2,000 fighters have been killed and 146,000 Libyans displaced, according to the United Nations.

Turkey and Russia’s diplomatic offensive came despite the countries being seen as supporting opposing sides.

Ankara dispatched troops — in a training capacity, it said — to support the GNA in January in a move criticised by leading European powers and US President Donald Trump.

Russia has been accused of backing pro-Haftar forces, which are supported by the United Arab Emirates, Saudi Arabia and Egypt — all regional rivals of Turkey.

Several hundred Russian mercenaries are reported to be in Libya supporting Haftar. Putin said any Russians in the country are not in Moscow’s pay.

“Moscow wants to preserve its presence in Libya through Haftar, including its oil interests,” he added.

Russia could rekindle trade in arms and wheat and relaunch a stalled railway construction project.

“If this (peace) process takes off, Russia will undoubtedly strengthen its role as peacemaker and at the same time keep Haftar.”

Europe and North Africa have also launched a diplomatic offensive to try to prevent Libya, with the increased involvement of international players in its conflict, from turning into a “second Syria”.

King Abdullah of Jordan on Monday warned that thousands of fighters have left Syria for Libya and “that is something we in the region but also our European friends will have to address in 2020”.

Image: Haftar (R) and Sarraj (L) were to meet in Moscow for talks along with “representatives of other Libyan sides”, the Russian foreign ministry said (AFP/File/FETHI BELAID, HO)

Both sides accuse each other of violating ceasefire in Libya