Libyan rivals will meet on Tuesday in Paris to agree on a political roadmap that aims to resolve disputed issues to pave the way for U.N.-backed elections this year.

U.N. Special Representative Ghassan Salame has been leading the latest push to unify and stabilize Libya, seven years after the uprising that toppled and then killed Muammar Gaddafi.

Salame told the U.N. Security Council on May 21 that he had given up trying to amend a stalled 2015 peace deal and was instead focusing on holding elections this year.

“Once we have this roadmap we will have outlined the commitments from all sides and the next steps,” a French presidential advisor told reporters in a briefing.

“The terms of Mr Salame’s mission will be clearer.”

Prime Minster Fayez al-Sarraj, eastern Libya commander Khalifa Haftar, Aguila Saleh, president of the eastern House of Representatives and Khaled Al-Mishri, president of the High Council of State, have all been invited.

Under President Emmanuel Macron, France has tried to play a bigger role in coaxing Libya’s factions to end the turmoil, which has let Islamist militants gain a foothold and allowed migrant smugglers to flourish.

The meeting will encourage the parties to quickly adopt the necessary arrangements for the staging of elections this year.

A draft of the 13-point non-binding political roadmap seen by Reuters includes the call for the immediate unification of the central bank and a commitment to support the creation of a national army. It also agrees to an inclusive political national conference within three months.

Analysts were cautious on the initiative.

“Libya is a corrupt, fractured environment that offers many rewards to actors bent on evading political compromise and using brute force instead,” said Jalel Harchaoui, associate at North Africa Risk Consulting, adding that some could be emboldened after being given international legitimacy.

“Others will feel excluded and tempted to conduct attacks and grab territory.”

The draft threatens international sanctions on those that impede the accord or dispute the outcome of elections.

Past attempts at peace deals in Libya have often been scuttled by internal divisions among the country’s competing armed groups and by the different countries backing the local actors.

The conference will be attended by some 19 countries and four international organizations, including countries that have influence on the ground such as Egypt, Italy, Qatar, Turkey, and the United Arab Emirates.

The meeting comes almost a year after Serraj and Haftar committed to a conditional ceasefire and to working toward election in talks already chaired by Macron. He was criticized at the time for consulting neither the U.N. nor the partners.

“France is unlikely to influence how the parties behave on the ground,” Harchaoui said, adding that previous sanctions and threats had made no noticeable impact on the behavior of protagonists on the ground. 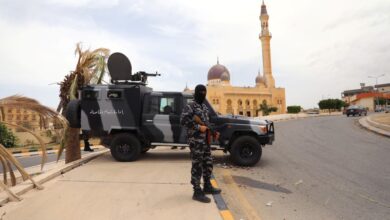 Egypt calls on all Libyan sides to stop escalation, resort to dialogue