if you ask countless dog owners for their opinions, many will tell you they don't need any scientific research to prove what they already know: Their dogs love them unconditionally 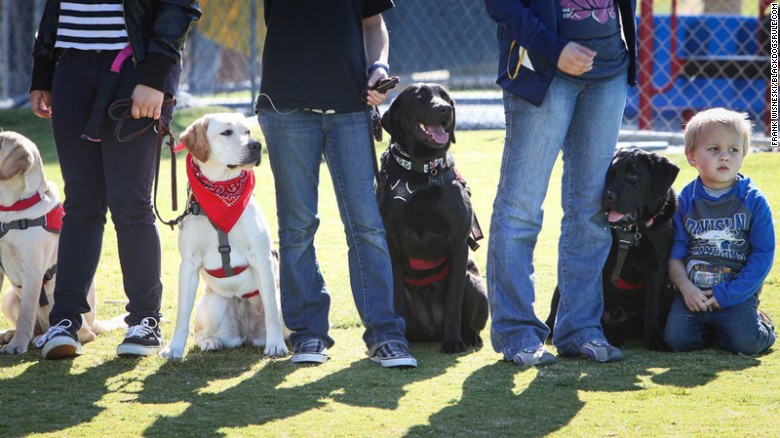 Firefighters rescuing a trapped infant inside a burning house in Baltimore, Maryland, last summer reportedly found an unbelievable sight: Eight-month-old Viviana was severely burned, but alive. Inexplicably, Polo, the family dog, was found laying on top of the baby, apparently saving her life, according to CNN affiliate

In Atlanta in 2014, a German shepherd saved the lives of two family members during a road-rage confrontation. Witnesses said an armed driver followed a family to a strip mall and started shooting, prompting the family dog in the car to jump into the line of fire, shielding a child and a woman. The dog later died.

In Connecticut in 2012, a family dog awoke parents in the middle of the night, apparently warning that their infant daughter had stopped breathing, CNN affiliate WFSB reported. They were able to revive her and she ended up being OK.

Stories like these grab headlines and raise the question: What motivates family dogs to protect their human caretakers? What’s going on in the hearts and minds of our pets that can prompt them to make the ultimate sacrifice?

Annika Huber, a doctoral student at Switzerland’s University of Bern Veterinary Public Health Institute who has studied dog behavior said it’s possible dogs are motivated by human-like feelings that allow them to empathize with us.

In fact, there are studies that suggest dogs have the ability to feel empathy toward humans. One experiment found a connection between empathy and “contagious yawning” — that phenomenon when someone in the room yawns, and that, in turn, makes you yawn — so the dogs started yawning when a human was yawning nearby.

This “may indicate that dogs possess the capacity for a rudimentary form of empathy,” the study concluded. Ramiro Joly-Mascheroni, co-author of the study, acknowledged the dogs may have been simply yawning because they were tired or stressed. But “humans don’t fully recognize others’ feelings until age 4 or 5,” he added.

But we are closer to being able to find out. “Years ago, we would not have expected to be able to study and speak about empathy in animals,” said Huber. “This was a capability reserved for humans.” Now, it’s an idea that Huber and other scientists are taking seriously and looking at with great interest.

What happens when you look into your dog’s eyes?

Dr. Brian Hare, founder of the Duke University Canine Cognition Center, said canines have learned to bond with us and — to a certain extent — “read our minds” like no other animals can.

“What is extraordinary is that dogs are so close to us — and so much a part of our lives — that they sometimes happen to be in the right time and place, and whether intentional or not, manage to save lives.”

They bond with us — in some ways like children bond with their parents. This bond has been proven through a physiological phenomenon known as the “oxytocin loop.”

Here’s how it works: When babies look into their parents’ eyes, a hormone is released in both the baby and the parent. The hormone, called oxytocin, can make us feel good, said Hare. “It creates this oxytocin loop that encourages us to protect and care for our babies.”

Hare said something similar happens between humans and dogs. When your dog stares into your eyes, your oxytocin rises. When you stare into your dog’s eyes, their oxytocin rises. “Dogs have basically hijacked this pathway that was meant to be between us and our kids,” Hare said. “So when your dog is just staring at you for no apparent reason, they don’t necessarily want anything. They are just hugging you with their eyes.”

Other ways we connect with dogs

True emotional bonding between humans and dogs, said Huber, would be difficult to prove scientifically. “Obviously, with humans you can ask them,” she said. “But with dogs, it’s really difficult to find valid indicators of an emotional state.”

Researchers have been using MRI technology to study dogs’ brains to see if they respond to human voice cues. In images showing dogs’ brain activity, specific parts of dogs’ brains lit up when the dogs heard human voices with positive vocalizations.

Another study indicated that dogs can tell the difference between various emotional human facial expressions.
Huber believes some dogs’ personalities may be more sensitive to humans. She remembers that years ago her own dog, Louis, “was quite special in terms of picking up emotional states.” Her mother called him her “mirror,” she said.

Huber, who has published her own research on this topic, said it’s possible some dogs respond to what she describes as, “very subtle signals of our emotional states, potentially those that may even not be obvious or conscious to ourselves.”

Her colleagues at the University of Bern conducted a separate study of hypersensitivity in dogs. It found that so-called “canine sensory processing sensitivity” (c-SPS) is a measurable personality dimension. And, it may be genetic.

But there are still a lot of unanswered questions surrounding the real reasons why some family dogs lay down their lives for humans. For example, we don’t know why Polo saved little Viviana’s life in that burning house in Baltimore last summer. At least for now, there’s not really a scientific answer that would explain Polo’s actions, Hare said.

What about the opposite? What drives beloved family dogs to act aggressively — even attack their owners — suddenly and unexpectedly? There are multiple causes that could contribute to this. A dog could be suffering from a hidden, painful health problem, for example.

Disorders such as hypothyroidism — when the thyroid glad doesn’t produce sufficient amounts of certain hormones — can increase aggressive behavior in dogs. Another potential factor is fear triggered by a dog suddenly sensing a threat to itself or its environment.

Also, miscommunication between pets and owners can spark a seemingly sudden attack. “Sometimes, aggression might not have come up as suddenly as we think, but due to a history of the owners not understanding or misunderstanding the dog´s behavior,” Huber said.

For example: a child who repeatedly tries to pet or hug their family dog when the dog may not like to be petted.
Dogs often show us they don’t like our behavior by doing things like freezing, yawning, lip licking or moving away from the child, she said.

But if the child misunderstands or misses these cues altogether, the potential risk is that the dog will resort to more intense signals — such as growling or snapping. “These are the behaviors we only pay attention to,” Huber said.

Perhaps in the future, Huber said, scientists might intensify their research on other complex capabilities in dogs, in addition to empathy, like “moral behaviors” — something that has “been thought to be reserved only for humans.”

The more we learn about how dogs think and feel, she said, the more likely it will pose “important ethical questions concerning our treatment of animals” and our obligations to them.

But if you ask countless dog owners for their opinions, many will tell you they don’t need any scientific research to prove to them what they already know: Their dogs love them unconditionally. And sometimes they prove it in ways that seem nothing less than miraculous.