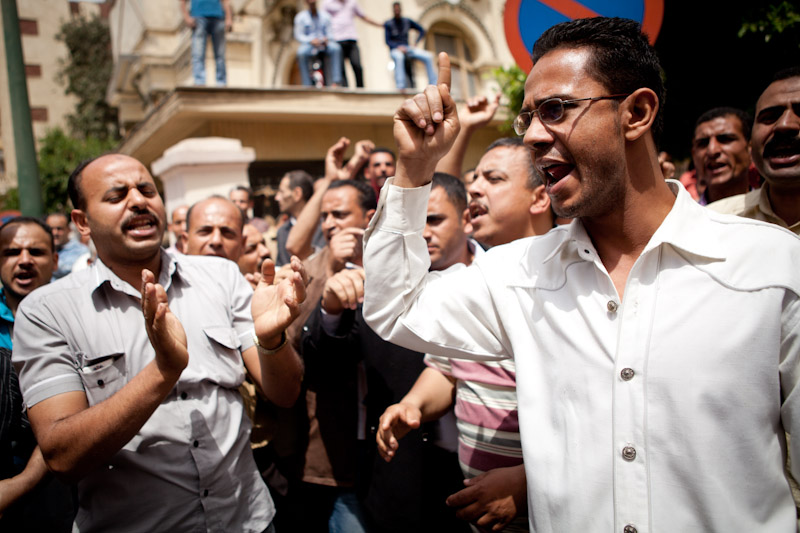 Just one day before Labor Day, the Interior Ministry is facing more internal dissent than any other government office. Two branches of the ministry — civilian employees and low-ranking police officers — have been waging protests and organizing press conferences since last week to demand better pay and an end to work discrimination compared to high-ranking officers.

Dozens of low-ranking policemen organized a protest on Monday in front of the Interior Ministry headquarters in Cairo, as part of their national strike that kicked off on Saturday.

The national strike is taking place in 17 governorates, where policemen have abstained from work in police stations and in securing the streets. Some have closed off the gates of the security directorates in Beheira and Daqahlia in Upper Egypt, according to Al-Masry Al-Youm.

The main demand by the policemen is to enforce the promotion system by which they can become high-ranking officersafter 20 years in service, which will be reflected in higher wages, said Taher Youssef, a low-ranking officer.

Youssef has been working in the ministry for 17 years. At the Monday protest, he told Egypt Independent that he earns LE1,200 as a full-time monthly wage.

Youssef and his fellow strikers complained to the ministry that they receive shoddy benefits compared to high-ranking officers.

“We can’t use police hospitals unless we have a letter from the police officer supervising us. Why can police officers and their families get the best treatment in their hospitals while we can’t?” asks Youssef.

Four policemen were injured after Central Security Forces attacked them in order to prevent them from protesting in front of the ministry building, but they were eventually let in, according to Gaber.

The protesters blamed their dire conditions on the corrupt top officers who belong to the old Mubarak regime.

“[The officers] are planning plots to stir instability in the country by tarnishing the ministry’s image, since we have started to gain some credibility in the street after the revolution,” said Ahmed Helal, a policeman at Azbakiya police station.

Protesting policemen also pleaded for the ministry to be controlled by civilians.

“We are against the militarization of the police, which means that we have to obey orders without questioning or thinking. We were not allowed to join the 25 January protests. We are a civil ministry according to the law,” said Ahmed Gaber, a policeman from Beni Suef, at the protest.

The protesting officers also demanded they be allowed to grow their beards, though according to current police regulations this is prohibited. In the past weeks, a number of policemen who opted to grow their beards for their religious beliefs have raised a controversy at the Interior Ministry.

In response to these demands, Field Marshall Hussein Tantawi approved on Monday afternoon an amendment to the Police Authority Law including a better promotional system for policemen.

However, the striking policemen said they will continue their strike until the changes are codified in a parliamentary law.

Civilian employees who work in Interior Ministry offices around the country also organized a protest for the first time in their history last Thursday in the police club in Shubra. At the protest, they expressed their long-felt bitterness about what they describe as terrible working conditions compared to high-ranking officers.

The Police Authority Law changes approved by Tantawi were largely silent on the demands of these civilian employees.

“The [interior] minister ignores us as if we are the ministry’s illegitimate children, although we are the backbone of the ministry. The minister is only concerned with the security situation, giving bonuses to policemen while totally ignoring us. But we are tired,” said Fekry Abdel Ghani, a fingerprinting expert at the ministry.

There are more than 40,000 civilians employed at the ministry, according to the civilian employees, who offer services such as issuing passports; issuing birth, marriage and divorce certificates; and releasing visas and residence permits for non-Egyptians.

A key demand by the employees is to be allowed to hold higher positions in their departments, since currently the top ranks are reserved for high-ranking officers.

“Promotions are only reflected in wages and not in actual higher administrative posts. I stay all my life doing the same job with the same responsibilities, which is very depressing,” said Nehad al-Sayed Beheiry, who works in the financial department at the Damietta Security Directorate reviewing monthly salaries.

The employees also complained about meager wages far lower than their police counterparts and demanded an increase in their end-of-service bonus payment.

“I’ve been working for 13 years in the ministry, my salary is LE920 [a month], and I have a bachelor’s degree in trade. I work eight hours a day, six days a week, and I am paid 50 piasters per hour for working overtime,” said Mohamed Baeziqa, employee at the ministry’s passport department.

Baeziqa is a member at the newly established Independent Syndicate for Civilian Employees which organized its initial conference last week due to the ineffectiveness of the official syndicate in advocating for employees’ rights.