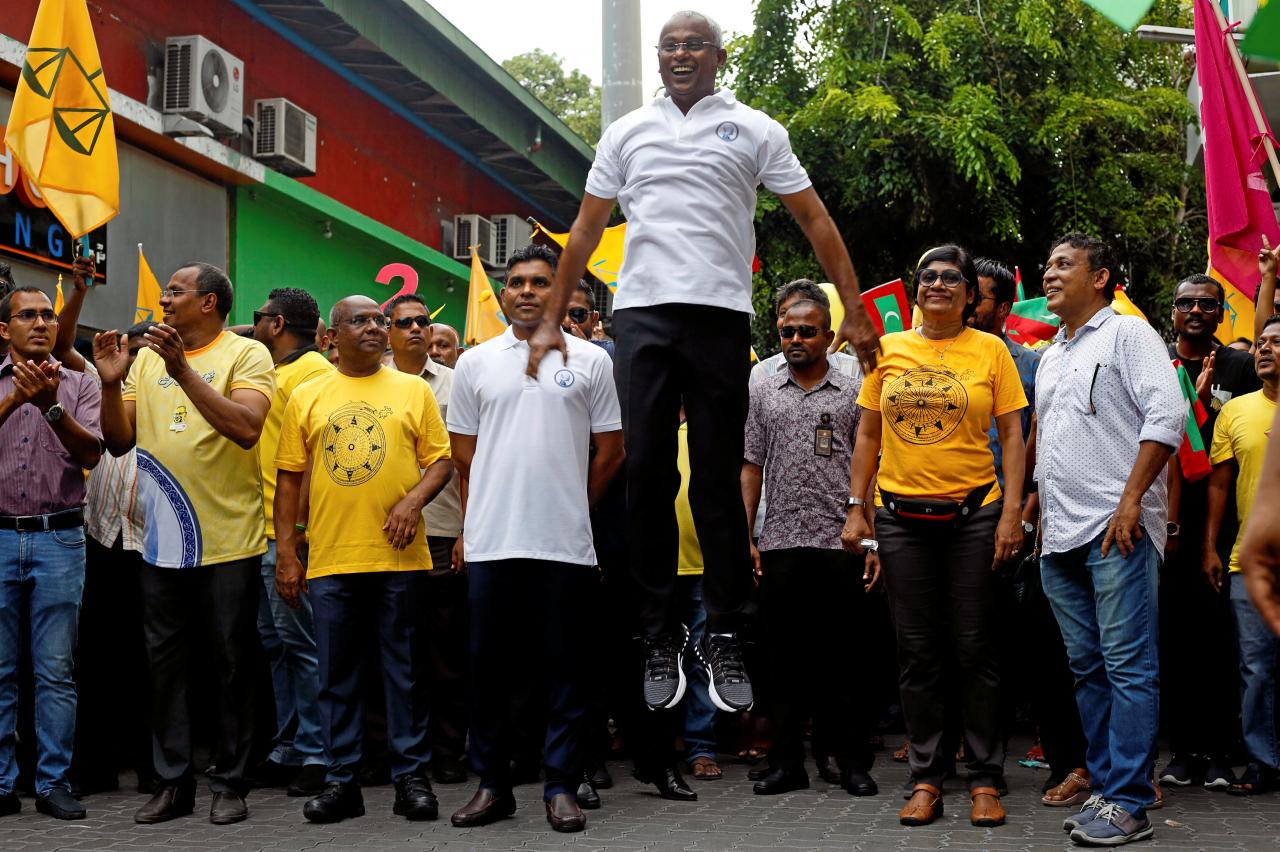 Incumbent Abdulla Yameen, who had cultivated ties with both Beijing and Saudi Arabia, conceded defeat after the Election Commission said Solih had won Sunday’s election by a margin of 16.7 percent.

The Maldives, a string of palm-fringed islands and atolls lying 325 miles (523 kilometers) southwest of the southern tip of India, is best known as a luxury holiday destination.

But the Muslim nation of less than half a million people has suffered a turbulent transition to democracy following the end of three decades of authoritarian rule in 2008.

“This is a moment of happiness, a moment of hope,” Solih told reporters in the capital Male. “This is a journey that has ended at the ballot box because the people willed it.”

India and The United States congratulated Solih, popularly known as “Ibu”, on his victory even before Yameen conceded.

“This election marks not only the triumph of democratic forces in the Maldives, but also reflects the firm commitment to the values of democracy and the rule of law,” India’s foreign ministry said in a statement.

“India looks forward to working closely with the Maldives in further deepening our partnership.”

Both New Delhi and Washington had been concerned by China’s growing influence in the Maldives and its lurch toward more hardline attitudes on religious issues during Yameen’s five years in power.

China, meantime, has helped build an extension to the international airport in the Maldives, and a bridge linking it to the capital, Male.

Before the election, the opposition said it would review the Chinese investment, partly out of concern over the level of debt entailed, with experts warning that the government could fall into a debt trap.

Exiled former prime minister Mohamed Nasheed – an ally of Solih – told Reuters in June he wants to renegotiate these deals.

The Chinese investment in Maldives is seen as part of its “String of Pearls” strategy, developing a network of friendly ports in the region from Sri Lanka to Pakistan.

India and Western nations have worried that the strategy ultimately aims to help China’s military extend its reach.

Since coming to power in a contested election in 2013, Yameen has been criticized for jailing opponents and restricting election observers and the media, and there had been fears that Sunday’s election would an unfair contest.

But Yameen soothed concerns over the risk of another messy transfer of power in a televised address to the nation.

“Maldivian people have decided what they want. I have accepted the results from yesterday. Earlier today, I met with Ibrahim Mohamed Solih, who the Maldivian electorate has chosen to be their next president. I have congratulated him,” he said.

Voter turnout was 89.2 percent, the Elections Commission said, adding the official results would be released by Sept. 30.

The country has been in political turmoil since February, when Yameen imposed a state of emergency to annul a Supreme Court ruling that quashed the convictions of nine opposition leaders, including Nasheed, the country’s first democratically elected leader and former president.

Yameen also jailed his half-brother and former president Maumoon Abdul Gayoom, who led the country for 30 years. He is being held in a prison on a remote island along with the former head of the top court and ex-ministers.

The opposition has said it would make the release of all political prisoners, including Gayoom, a priority.

Mohamed Shainee, the minister of fisheries in Yameen’s government, said on Twitter it was “the beginning of a new chapter” for the country, asking voters to “forgive our wrongdoings”.

The Hindu, an Indian newspaper, quoted Maldives’ ambassador to India as saying Solih would assume power on Nov. 17 after Yameen’s five-year term ends.