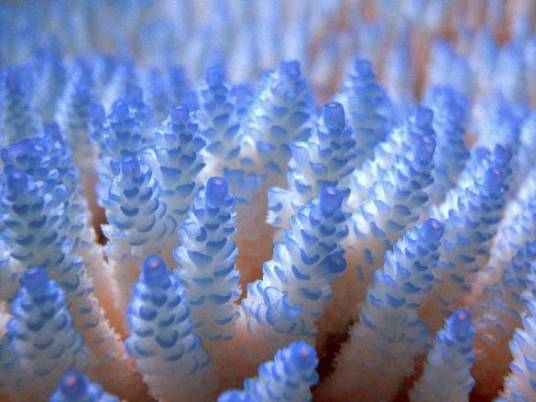 The Egypt National Climate Change Coalition — founded in October 2012 by Lama El Hatow from the Water Institute for the Nile and Sarah Rifaat of 350.org — held its fourth meeting Tuesday night at Egypt’s icecairo environmental hub downtown.
The focus of this meeting was a presentation about the detrimental effects of climate change on the marine environment and the importance of separating facts from fiction. The group also discussed what should and shouldn’t be done addressing these issues.
Giving the presentation was marine ecologist and diving instructor Dr. Moshira Hassan, whose extensive work, research and experience as vice president of Reef Check Germany and biology professor at AUC over the past 20 years has made him a leading expert on marine life. Hassan is also the founder of Reef Check Egypt, which was recognized for its efforts by international environmental organization Greenpeace.
According to Hassan, the Earth’s water bodies absorb around 90% of the heat and CO2 in the atmosphere. To demonstrate this, Hassan said imagine filling up a bathtub with water and then systematically heating up the bathroom with all doors and windows closed. Once the water is hot, if one was to open a window, all the heat in the air would be sucked right out, but the water would stay hot for a long time.
“Climate change is too broad of a term to speak about the whole subject practically,” she said, adding that rising ocean temperatures due to climate change have drastic effects and can destroy marine ecosystems.
She stressed that the issue of CO2 absorption in major water bodies should be separated from the impact of greenhouse gases because CO2 acidifies oceans, eating away at coral and damaging organic substances.
This results in what is called coral bleaching, when all the living organisms have been killed, leaving the white coral skeleton behind, which Egypt’s HEPCA warned out about last summer.
Hassan also tackled climate change signifiers such global temperature changes.
She explained that average increases may look small but when it comes to average water temperatures, even a small increase can have a huge impact on marine life.
“There’s no more fitting place for the expression that ‘the devil is in the details’ than when it comes to discussing and looking at climate change,” she says.
Movements to preserve coral reefs often target regions that are home to the most spectacular fish and coral life, including Egypt’s famous reefs. But this is a mistake, said Hassan. Instead, she contends that researchers and environmental groups must look at what she called the “most resilient corals” to get a better handle of how their ecosystems survive and adapt to rising temperatures.
“In the same way that some people never get sick and if they do recover quickly, or other always get sick and never recover, coral reefs and marine ecology are the same,” she says. “Survival and resistance is in the genes.”
In her eyes, awareness is getting below the surface of issues and being prepared to get involved in the public sphere to help implement change.
“The key is to not get lost in ideal intentions and wishes and remember the facts of the situation: The issue is now dire, it is next to impossible to tackle and even more so in Egypt. It cannot be done by a small group of people… The majority of people simply do not care,” she says.
“We’re way past the point of countering these issues with petitions and the promotion of ecotourism, because the environment has already been destroyed and hence the beach tourists — mostly divers in the 80s — have been replaced with families looking for cheap deals who end up making issues worse,” she said.
Hassan concluded by saying, “Everything that anybody does obviously helps whether it is putting up a sign to not stand on coral or signing petitions. But with Egypt, if you really want to get to get things done, activists need to fight to loosen the bureaucracy around these issues and get the facts into the media.”
Environmental protection in the country faces several challenges, including lenthy red tape when reporting violations.
During the Q&A session, session host Hatow highlighted that Environment Minister Hesham Zaazaa had expressed extreme interest in pushing ecotourism. “So far it’s just words, as usual, however it might be an indicator that it’s a good time to bring issue of climate change to light,” she said.
A memorial to Mindy Baha El Din
At the end of the session, the group held a small memorial Mindy Baha El Din, one of Egypt’s most energetic environmental activists, who passed away on Monday.
“Mindy was always the biggest supporter of environmental groups and even the ENCCC,” said Hatow. “It’s really after these things happen that you realize how much people do to make things the way they are that is often taken for granted. I don’t see how we could’ve held this talk today without remembering Mindy,” she says.
Ahmed Dorghamy, an environmental activist from Nahdet El Mahroussa’s Green Arm, added how Mindy has two species of the animal kingdom officially named after her that were discovered by her husband Sherif Baha El Din.
The two species are called the Mindy Gecko and Tarantula Mindeya, which are registered as unique Egyptian species and can be seen in UK zoos amongst other places.