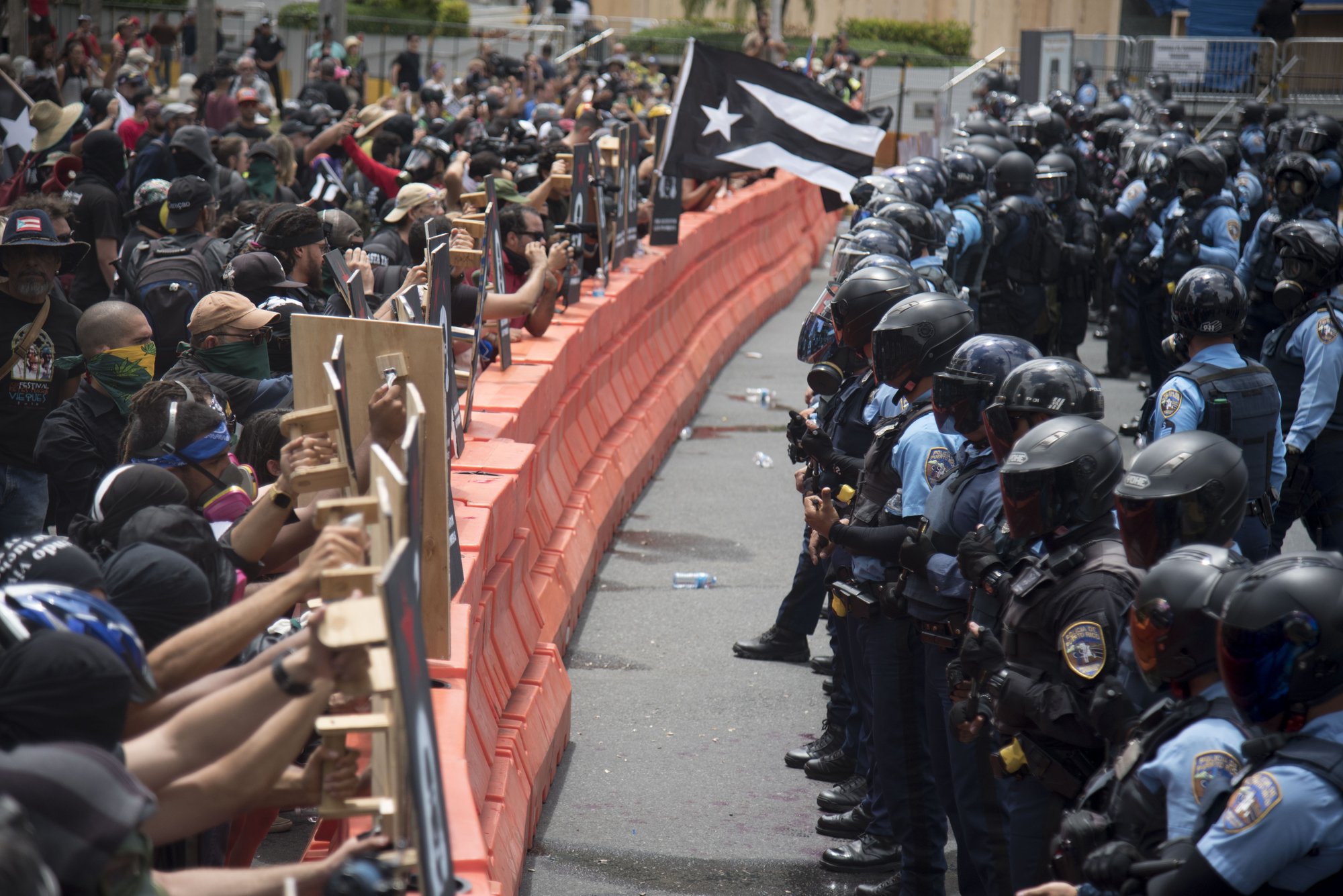 BERLIN (AP) — Higher salaries, better working conditions, maternity leave, minimum wage and an end to discrimination against temporary or foreign workers: These were among the concerns as hundreds of thousands of union members and labor activists rallied around the world to mark May Day.

The tradition of May Day marches for workers’ rights began in the United States in the 1880s. It quickly spread to other countries at a time when industrialization pitted poorly paid employees who had few protections and little power against increasingly dominant factory employers and landowners.

Over the decades, the May Day protests have also become an opportunity to air general economic grievances or political demands. Here’s a look at Wednesday’s protests :

Thousands of Puerto Ricans marched to traditional music while protesting austerity measures, with many participants at a May Day event demanding the ouster of a federal control board overseeing the U.S. territory’s finances.

Many in the crowd in San Juan waved Puerto Rican flags made in black and white rather than red, white and blue to symbolize mourning for the island’s plight, especially since September 2017′s Hurricane Maria.

A protester dressed as comic book superhero Superman was arrested after jumping over a street barrier and hugging a police officer.

Two protesters and a police officer were injured in the Italian city of Turin when police blocked a demonstration against the construction of a high-speed rail line between France and Italy, according to ANSA, an Italian news agency.

Among the protesters were members of the 5-Star Movement, a populist party that is in Italy’s ruling coalition but is opposed to the tunnel. One member, Torino city councilor Damiano Carretto, said on Facebook that he was hit in the head and on the hand by a police truncheon.

The 35.7-mile (57.5-kilometer) long Turin-Lyon High-Speed Train tunnel link, known in Italy as TAV, is a key part of an EU project linking southern Spain with eastern Europe. But the 5-Star Movement has long opposed the project.

Authorities in Russia said about 100,000 people took part in a May Day rally in central Moscow organized by Kremlin-friendly trade unions on Red Square. Opposition activists said more than 100 people were detained in several cities, including for participating in unsanctioned political protests.

In St. Petersburg, police arrested over 60 supporters of opposition leader Alexei Navalny. Some of them carried signs saying “Putin is not immortal,” in reference to Russian President Vladimir Putin, who has been at the helm since 2000.

Police manhandled dozens of protesters in Russia’s second-largest city, including lawmaker Maxim Reznik, who was later released. Reznik told the Dozhd TV station that police detained almost everyone in his protest group but gave no reason for the arrests.

AGITATORS DISRUPT MAY DAY IN FRANCE

French police clashed with stone-throwing protesters who set fires and smashed up vehicles as tens of thousands of people marched peacefully under tight security.

France’s Interior Ministry deployed 7,400 police officers in Paris to counter troublemakers, who disrupted May Day events in the last several years. About 330 arrests were made Wednesday.

Riot police used tear gas to try to control masked troublemakers near Paris’ Montparnasse train station, the start of the main May Day march, and again at the end near the Place d’Italie.

They also fired flash grenades and rubber balls to disperse unruly clusters of the black-clad protesters. The Interior Ministry said 24 protesters and 14 police officers were injured.

While some of the people clashing with police wore the signature yellow vests of a French anti-government movement, the peaceful march also had participants in yellow vests as well as waving labor union flags.

DETENTIONS AT TURKEY’S MAY DAY RALLIES

Turkish police detained May Day demonstrators trying to march toward Istanbul’s main square, which has been declared off-limits by authorities, who cited security concerns. Still, small groups chanting “May Day is Taksim and it cannot be banned,” attempted to break the blockade, with dozens reportedly detained. Taksim Square has held symbolic value for Turkey’s labor movement since 34 people were killed there during a May Day rally in 1977 when shots were fired into the crowd from a nearby building.

The DGB, a confederation of unions with almost 6 million members, warned that the political and economic turmoil in Britain following its vote to leave the European Union nationalism “shows what happens if those who stoke fear but have no plan for the future gain the upper hand.”

When night fell, hooded demonstrators lit flares during a traditional May Day event put on by left-wing groups in Berlin. Police arrested several people after some participants threw bottles at officers.

Protesters threw cobblestones and fireworks at police, included mounted officers, who were trying to keep them away from a neo-Nazi rally in Goteborg, Sweden’s second largest city.

In neighboring Denmark, helmeted police circled their vans around hooded people in black shouting anti-police slogans to keep them away from other May Day demonstrations in Copenhagen, the capital.

A handful people were detained in both countries.

In Sri Lanka, major political parties called off the traditional May Day rallies due to security concerns following the Easter bombings, which killed 253 people and were claimed by militants linked to the Islamic State group.

Wearing headbands and swinging their fists, protesters in South Korea’s capital of Seoul rallied near City Hall, marching under banners denouncing deteriorating working conditions and demanding equal treatment and pay for temporary workers. A major South Korean umbrella trade union also issued a joint statement with a North Korean workers’ organization calling for the Koreas to push ahead with joint economic projects, despite lack of progress in nuclear negotiations between Washington and Pyongyang.

MAY DAY HALTS TRANSPORTION IN GREECE

Spain’s workers marched in its major cities to make their voices heard days before acting Prime Minister Pedro Sánchez starts negotiating with other parties to form a new government. Leading labor unions are pressing Sánchez to roll back business-friendly labor and fiscal reforms that have remained in place since the conservatives were in charge.

In Bangladesh, hundreds of garment workers and members of labor organizations rallied in Dhaka, the capital, to demand better working conditions and higher wages. Nazma Akter, president of one of Bangladesh’s largest unions, said female garment workers were also demanding six months of maternity leave and protection against sexual abuse and violence in the workplace.

An opposition party in South Africa used May Day to rally voters a week before the country’s national election. Economic Freedom Fighters members, wearing their signature red shirts and berets, gathered at a stadium in Johannesburg to cheer populist stances that have put pressure on the ruling African National Congress to address topics like economic inequality and land reform.

In the Philippines, thousands of workers and labor activists marched near the Malacanang presidential palace in Manila to demand that President Rodrigo Duterte’s government address labor issues including a minimum wage increase and the lack of contracts for many workers. One labor group said its members would not vote for any candidate endorsed by Duterte in upcoming senate elections and burned an effigy of the president.

Construction workers, bus drivers, freelancers and domestic workers from outside the country joined a Labor Day march through central Hong Kong. The protesters marched from Victoria Park to the main government offices, some carrying banners reading “Maxed Out!” The Hong Kong Confederation of Trade Unions is demanding a maximum standard work week of 44 hours and an hourly minimum wage of at least 54.7 Hong Kong dollars ($7).

Associated Press journalists from around the world contributed to this report.

By FRANK JORDANS and KIM TONG-HYUNG

Demonstrators holding wooden shields are confronted by police during a protest against the Federal Fiscal Control Board, as part of the May Day celebration in San Juan, Puerto Rico, Wednesday, May 1, 2019. The U.S. Congress established the appointed Fiscal Control Board to oversee the debt restructuring in order to combat the Puerto Rican government-debt crisis. (AP Photo/Carlos Giusti)

Paris police brace for May 1 rallies

'Work is a great value': Sisi on Labor Day