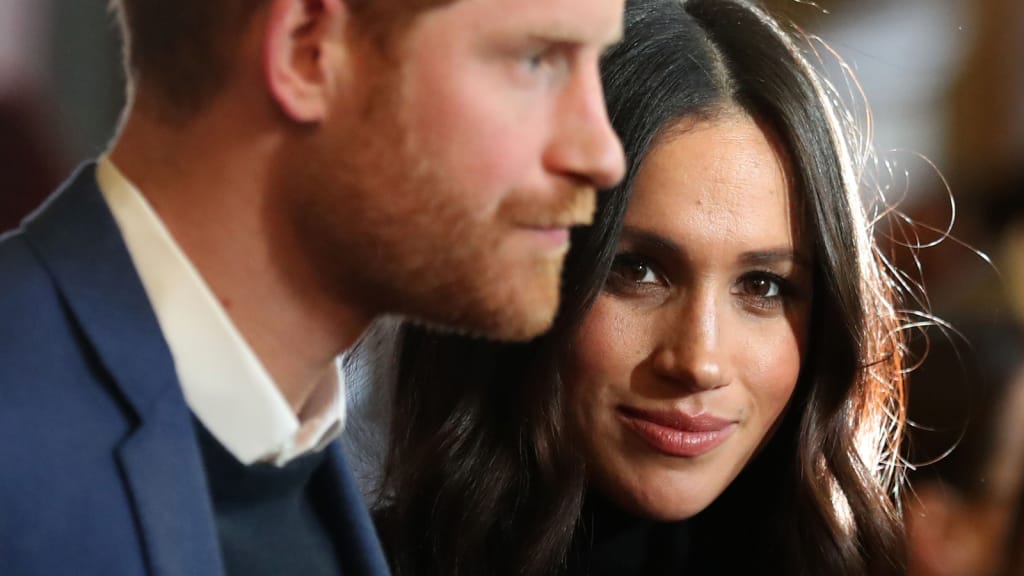 In New York, the bookstores have front of store displays: Meghan, An American Princess.

Although we expect Meghan to be titled duchess after her marriage, she is still, strictly speaking, a princess.
And as well as being American, she is also an intelligent, successful, self-made woman, a committed feminist, a UN women’s advocate and a woman of color, who has spoken movingly and courageously about the prejudice she has experienced. It looks like it’s time to change the princess narrative, once and for all.
Ever since Prince Harry was a toddler, magazines and newspapers have run articles about his future possible brides.
They tended to be wealthy young British aristocrats whose fathers had a castle and who devoted their 20s to parties and being photographed at social gatherings, rather than working a nine-to-five. Usually blonde, all white.
As Peggy Oreinstein argued in the bestselling book,”Cinderella Ate My Daughter,” princess culture encourages girls to act in stereotypically feminine ways. The sparkly dresses might be fun, but princess culture places the biggest value on a woman’s physical beauty — and she is also expected to speak only the minimum and wait passively for rescue by her prince.
The princesses invoked are not real ones like Princess Victoria, who battled with her mother for independence and the throne, or Princess Amina, future warrior queen of Zazzau, now Zaria in Nigeria, or Rani Velu Nachiyar of India who fought back against the British Empire and is known as “India’s Joan of Arc.”
Recently, when a little girl arrived at her California dance studio’s “princess day” wearing a hot dog costume, social media was charmed. The teacher said, “She loves princesses but she wanted to be original… She wore a princess costume underneath it and said she was a princess on the inside.” But what is “being a princess on the inside?”
Yes, new style princesses have broken the mould — like Elsa in “Frozen,” who is marvelous because she is magical, not beautiful. But, still, according to research by The Pudding, in “Frozen,” a film about two sisters, the dialogue is nearly 60% male. “The Little Mermaid” has 68 percent male dialogue and Aladdin is over 90 percent — Princess Jasmine doesn’t get to say much. And princesses tend to be white — characters like Tiana in “The Princess and the Frog,” Moana and Jasmine are exceptions.
To be a princess in history was often to have a rather miserable life. The daughters of George III despaired under a restricted life at Windsor Castle, prevented from marrying, barely allowed to go out, always expected to be there as company for the King.
The Spanish princess Catherine of Aragon, after her first husband, Arthur, died, was kept at the English court, impoverished because Henry VII refused to pay back her dowry, and both Princess Elizabeth and Mary were pushed around and mistreated by Henry VIII.
Mary was particularly punished for her loyalty to her mother, Catherine of Aragon, and her refusal to accept Anne Boleyn.
More recently, Princess Margaret led a life of privilege and glamour — but could not marry the man she loved, Peter Townsend, and found it hard to find a purpose. The more you read about real-life princesses, the less you want to be one.
Queens consort can have independence and power (as long as they stay in favor with the King) and some of our queens regnant have been the greatest monarchs in history, as tough and sharp as any man — Elizabeth I, Empress Ameniras of Kush who repelled Roman forces and Zenobia of Palmyra.
Princesses tend to be drawn as white. In Britain, still, the elites are dominated by white faces — most of all the royal family. Only one in 13 members of Parliament is a person of color, and only around 5 percent of judges are people of color. Meghan, a woman of color who talks passionately about racism, is marrying into the royal family, and any child of hers and Harry’s will be seventh in line to the throne — that sends a powerful message.
It’s time for the princess narrative to change.
Our new princess is a self-made woman who speaks eloquently and passionately about everything from her experience of racism, to poverty, to Me Too, who has worked for the UN and asks for wedding donations to be given to charity.
Hopefully, Princess Day in the future will involve dressing up as exactly this.
Photo credit: CNN