Britons will find armed troops at vital locations Wednesday after the official threat level was raised to its highest point following a suicide bombing that killed 22, as new details emerged about the bomber.

Home Secretary Amber Rudd said bomber Salman Abedi was known “up to a point” to the British intelligence services and police.

France’s interior minister said Abedi is believed to have traveled to Syria and had “proven” links with the Islamic State group.

Gerard Collomb said on BFM television Wednesday that British and French intelligence have information that the British-born attacker had been to Syria. He did not provide details, and said it is unclear whether Abedi was part of a larger network of attackers.

Collomb, who spoke with British Prime Minister Theresa May after the attack, said the two countries should continue cooperating closely on counter-terrorism efforts despite Britain’s pending exit from the European Union.

Rudd said Britain’s increased official threat level will remain at “critical” as the investigation proceeds. It will not be lowered until security services are convinced there is no active plot in place, she said.

Following the increase in the threat level, officials say soldiers will be deployed to places like Buckingham Palace, 10 Downing Street and Parliament. They will replace armed police as Operation Temperer takes effect Wednesday. 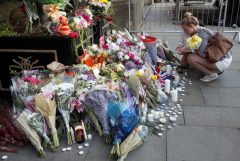 Vigil in Abert Square, Manchester, May 23, 2017, the day after the suicide attack at an Ariana Grande concert that left 22 people dead (Kirsty Wigglesworth / AP)

Officials believe this will free up police to fight the threat of further extremist action against civilian targets, amid fears that another attack may be imminent.

London Police Commander Jane Connors said the goal is to “make our city as hostile an environment as possible for terrorists to plan and operate.”

She said the “reality” of the situation is that police must be ready to respond quickly with armed officers. Armed police walking patrols have been added, she said.