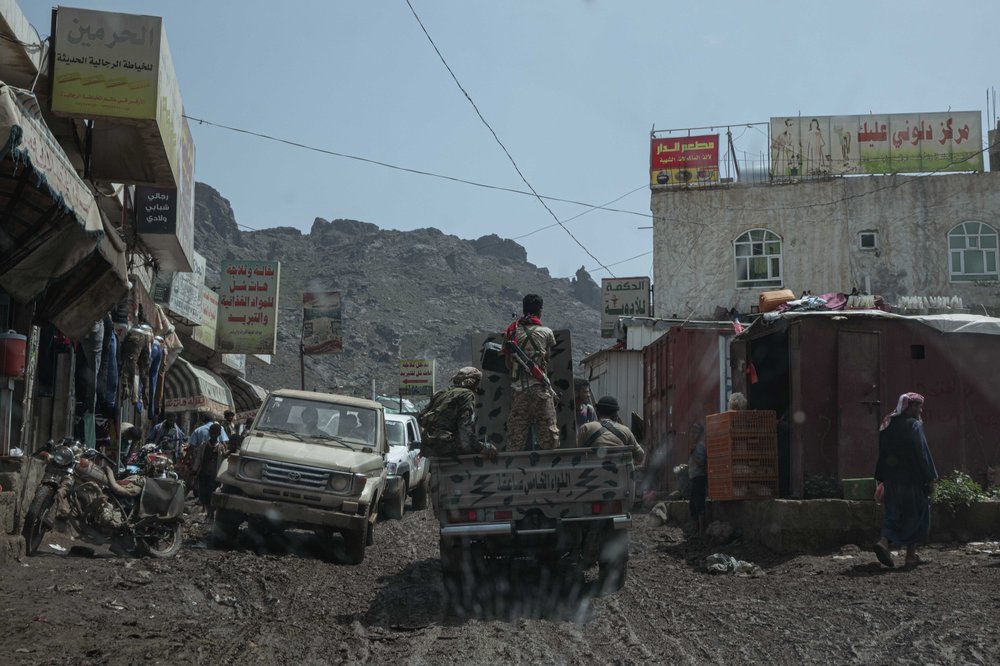 MOREYS, Yemen (AP) — The militiamen pointed out across the hills, a landscape of nothing but stone and brush in southern Yemen. Over there, invisible, were the closest positions of the Houthi rebels, they said. Beyond that loomed Nasah Mountain, a peak topped with a fortress-like crag from which the rebels can shell across the area.

They do so every night. Once darkness falls, the hills shake as the militiamen and the rebels exchange rounds of mortars and machinegun fire. Sometimes the militiamen let loose with their tank, dug in at the rear of their position. 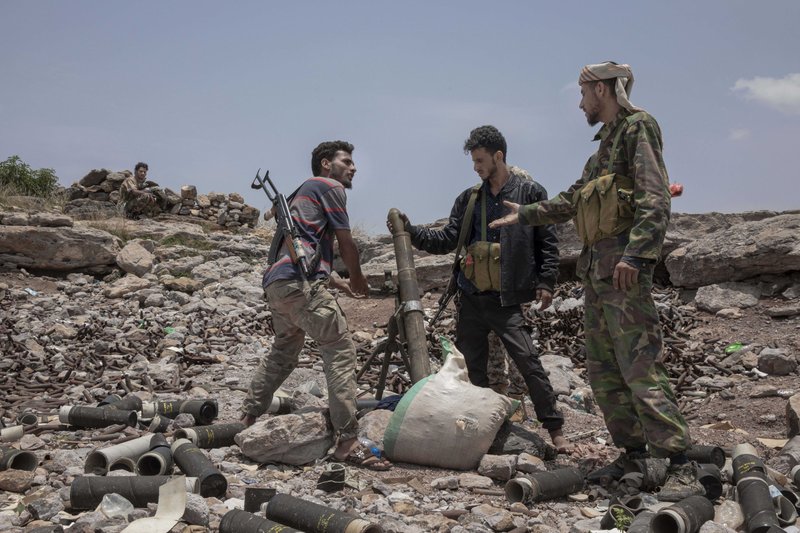 It has been this way for months, with neither side advancing but with a constant drain of bloodshed.

“Where you’re standing right there, me and my colleague were talking and in two seconds, his body was torn to pieces,” one militia commander, Col. Taha Saeed, told The Associated Press during a rare visit to the front lines this week.

Yemen’s civil war, nearly five years long, has been locked into an exhausted stalemate. Little ground is gained or lost between the Iranian-allied Houthi rebels, who hold the north, and forces backed by the U.S.-allied, Saudi-led coalition, who control the south. The war’s bloody grind has killed tens of thousands, destroyed the country’s economy and pushed millions to the brink of famine. 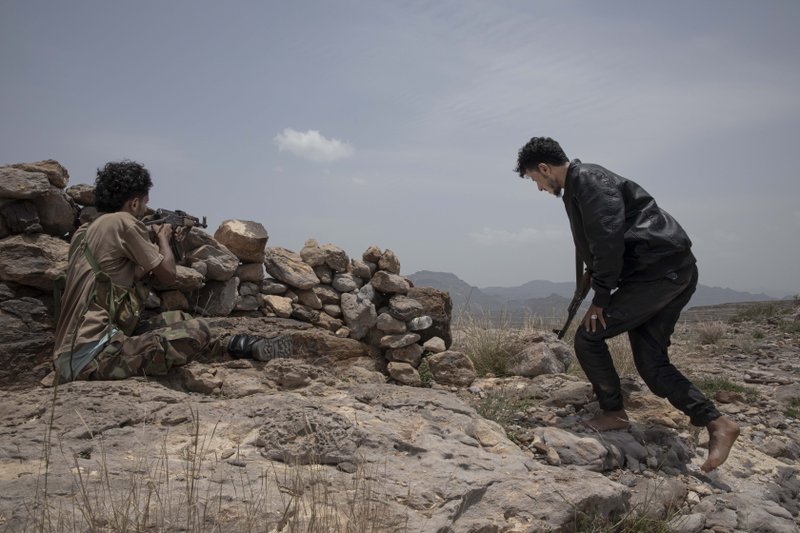 A Yemeni militia fighter takes cover during an exchange with rebel Houthis along a front line in an area known as Moreys in Yemen’s Dhale province. (AP Photo/Nariman El-Mofty)

This area in the southern province of Dhale is one of the few front lines that still sees frequent fighting. The fighters battling the Houthis here belong to a number of militias, particularly one known as the Security Belt, which are funded and armed by the United Arab Emirates.

Their equipment is bare-bones.

At one militia position, in an area called Moreys, around 40 fighters touting assault rifles had a single tank — used as an artillery piece — along with a few mortar launchers and a pick-up truck mounted with a heavy machine gun. One of the men at the mortar had bare feet.

During the day, when it is calm, many of them sleep, hidden in shelters they have dug into hillsides and barricaded with stones. Nearby is a field of qat, the stimulant leaf that Yemenis addictively chew; even with a war nearby, workers never stop tending the plants. 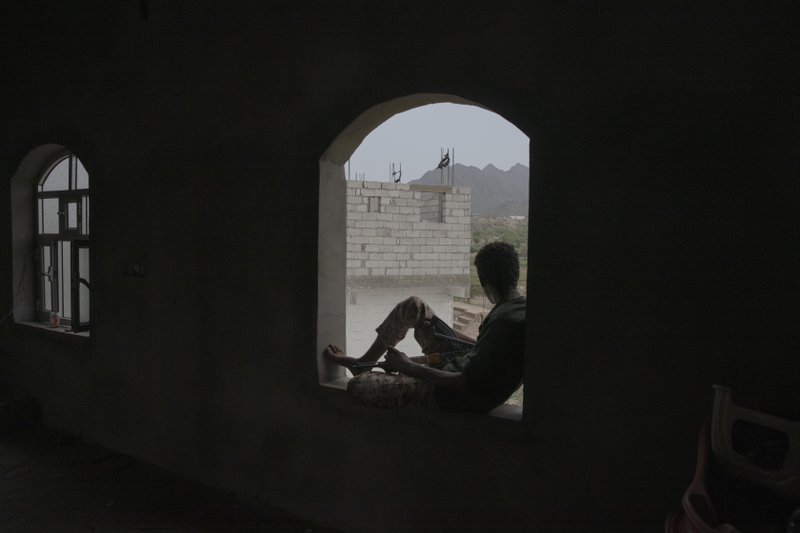 Yemeni fighter from a militia known as the Security Belt, which is funded and armed by the United Arab Emirates, takes shelter near the Gabhet Hajr front line with the Houthi rebels in Yemen’s Dhale province. (AP Photo/Nariman El-Mofty)

The militias and the Houthis have battled over this patch of Dhale for years, advancing and retreating back and forth along the same stretch of highway, no longer than 30 kilometers (18 miles).

Last year, the militias had the upper hand, holding all the way up to the northern end of the highway. But in May, the Houthis surged forward in an offensive that drove the militiamen back where they started at the southern end of the stretch.

Since then, the front has been locked in place. Sometimes one side or the other tries a foray. The Houthis late on Tuesday launched an assault on several hamlets near Moreys, Yemeni media reported, but were driven back in fighting that officials said left dozens of rebels dead or wounded. 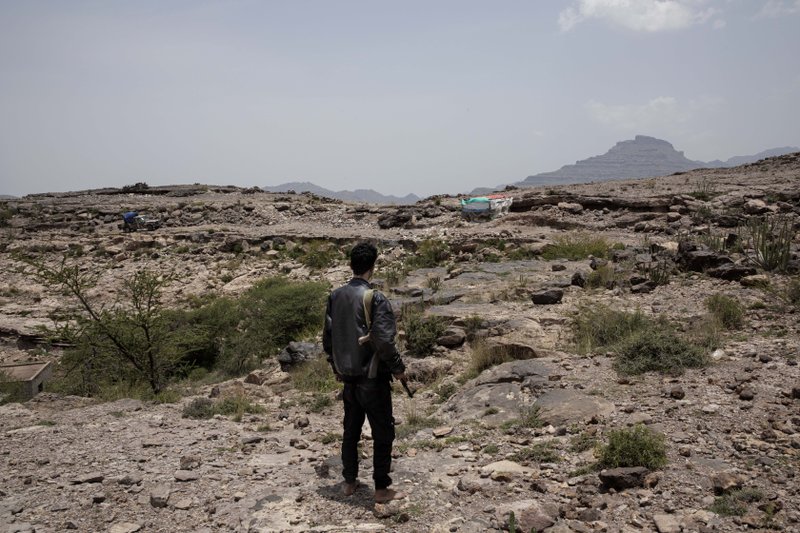 A Yemeni fighter from a militia known as the Security Belt, funded and armed by the United Arab Emirates, looks towards the hills in an area called Moreys, on the front line with the Houthi rebels. AP Photo/Nariman El-Mofty)

At another militia position nearby, at Hajr, the few dozen fighters manned barricaded positions in the abandoned houses of a village. Most residents have fled the front-line areas. But not all: a woman near the fighters tended a herd of goats. Some local men have brought their weapons and volunteered alongside the Belt militiamen.

The Houthi positions are only about 500 meters (yards) away, the fighters said.

One of the militiamen, Ali Abdullah, said the fighters need greater support from the coalition and the Emiratis to tip the balance. “We’re very close to the enemy here,” he said.

Soon after, thuds of mortars were heard, the first rounds in the night’s exchanges.

In this Monday, Aug. 5, 2019 photo, fighters from a militia known as the Security Belt, that is funded and armed by the United Arab Emirates, head to the frontline in an area called Moreys, in Yemen’s Dhale province. Yemen’s civil war has been deadlocked for months, with neither side making major gains. At one of the most active front lines, militiamen backed by the Saudi-led coalition are dug in, exchanging shelling every night with Iranian-allied Houthi rebels only a few hundred meters away. (AP Photo/Nariman El-Mofty)