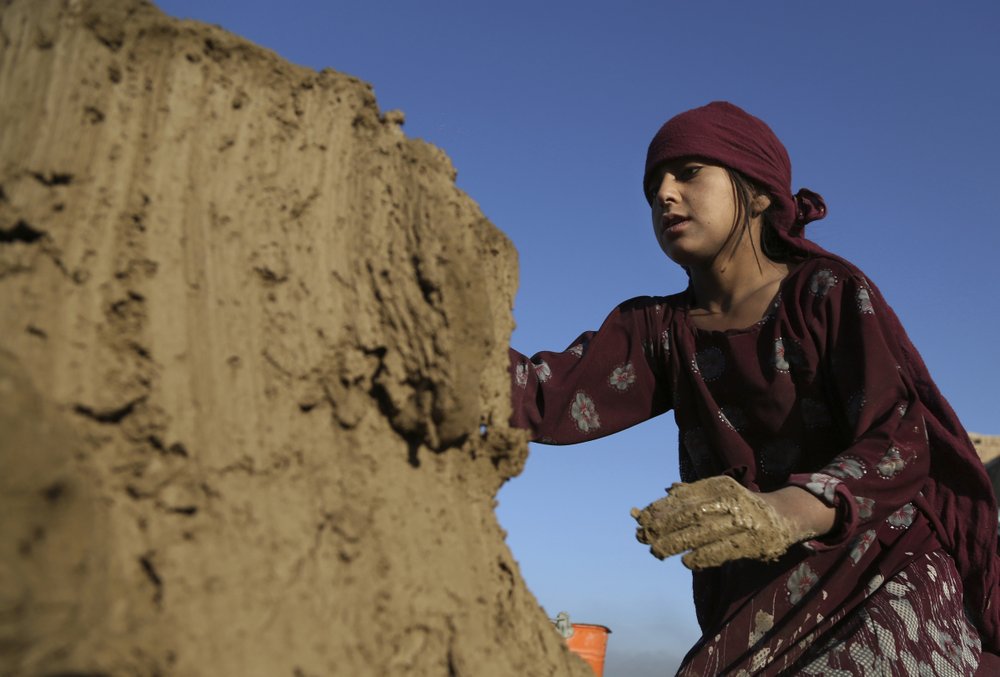 KABUL, Afghanistan (AP) — Every day before dawn, 10-year-old Kamran goes to work with his father and other relatives at a brick factory on the outskirts of Kabul.

Like many children in Afghanistan, school is a luxury his family can no longer afford. His father, Atiqullah, supports his family of eight as well as several siblings, nieces and nephews. One of Kamran’s uncles is ill and another has passed away, leaving their families in his father’s care.

“My children wake up early in the morning and right after prayers they come here for work, so they don’t have time for school,” said Atiqullah, who like many Afghans has only one name. “These days if you don’t work, you cannot survive.”

The U.S. and its allies have sunk billions of dollars of aid into Afghanistan since the invasion to oust the Taliban 18 years ago, but the country remains mired in poverty. Signs of hardship are everywhere, from children begging in the streets to entire families — including children as young as five or six — working at brick kilns in the sweltering heat.

Atiqullah’s family comes from the eastern Nangarhar province, a stronghold for both the Taliban and an Islamic State affiliate that has seen heavy fighting in recent years. Brick factory owners travel to the villages and offer loans to cover basic necessities, forcing families to work them off during the summer months in a form of indentured servitude. Workers say a family of 10 can bring in an average of $12-18 a day, depending on their productivity.

Shubham Chaudhuri, who recently completed a three-year stint as the World Bank country director for Afghanistan, said more than half of Afghans live on less than a dollar a day, the amount considered necessary to meet basic needs.

“Even more striking was the fact that almost three quarters of the population was close to that level. So I think the state of poverty in Afghanistan today is that it is deep and it is widespread,” he said.

Afghanistan’s economy grew by just 2% last year, the slowest rate in South Asia, held back by the lingering conflict, drought and endemic corruption. The watchdog Transparency International regularly rates Afghanistan among the most corrupt countries on earth. Much of the international aid has ended up in the hands of former warlords who live in gated compounds, cruise around in motorcades and stash their fortunes in the Gulf.

Widespread misery and anger at the country’s elites has added fuel to the conflict and swelled the ranks of the Taliban, who now effectively control around half the country. The insurgents have held several rounds of talks with the United States in recent months, aiming for a deal in which foreign forces would withdraw.

A World Bank report released in this week said a political settlement with the Taliban could boost the economy by encouraging the return of capital and skilled workers from overseas — but only if the security situation improves.

“Rapid growth will only be possible with improved security under a government that remains committed to private sector development, respects the rights of investors, and maintains the gains Afghanistan has achieved over the past two decades toward establishing strong and impartial government institutions,” the World Bank’s current country director, Henry Kerali, was quoted as saying in the report.

Jan Agha, a 65-year-old who works alongside Atiqullah’s family in the brick kilns, has little hope for the future. He’s been working off loans for more than 30 years, 20 of them spent as a refugee in neighboring Pakistan. His four sons have already joined him on the assembly line, and he expects his grandchildren and great-grandchildren to do the same.

In this Wednesday, June 19, 2019, photo, Hameda, 8, works at a brick factory on the outskirts of Kabul, Afghanistan. The U.S. and its allies have sunk billions of dollars of aid into Afghanistan since the invasion to oust the Taliban 18 years ago, but the country remains mired in poverty. Signs of hardship are everywhere, from children begging in the streets to entire families _ including children as young as five or six _ working at brick kilns in the sweltering heat.(AP Photo/Rahmat Gul)